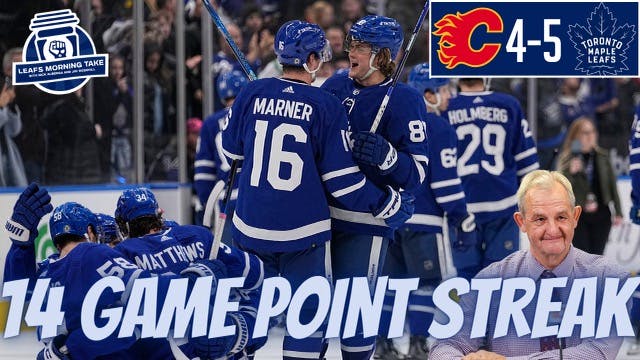 By Nick Alberga
1 month ago
Monday doesn’t hit as hard when you get to talk about yet another Maple Leafs victory.
Seriously, this run is getting ridiculous.
Mitch Marner potted the OT winner as Toronto outlasted Calgary 5-4 on Saturday night to improve to 18-5-6 on the season. With a goal and an assist, the 25-year-old extended his point streak to 22 games. Meantime, not to be outdone, the Leafs have racked up a 14-game point streak (11-0-3) themselves, which is two games shy of the team record.
Without question, there was lots of ground to cover from the weekend on the Monday Edition of Leafs Morning Take. William Nylander notched his first career five-point night and again, the good times continued for Marner. Additionally, the Leafs found a way to persevere despite the fact that Matt Murray did not have his A-game. On top of that, it’s always news when Toronto can win a game in OT —of course, that’s been one of the team’s Achilles Heels over the years. Hell, they even incorporated a new strategy to start the extra frame, and ultimately, thanks to Calgary’s lack of discipline, it paid off.
Speaking of which, in case you missed it, Flames head coach Darryl Sutter had some choice words (or lack thereof) about the officiating following the game. He pretty much intimated a Toronto bias, which is quite the accusation with minimal data to back it up.
Lastly, we wrapped with the PointsBet Canada bet of the day:
Be sure to join us on Tuesday at 11 AM ET as we preview Leafs & Ducks from Scotiabank Arena.
Don’t forget to subscribe, like, and leave us a review wherever you’re checking us out!
Editorials
News
Recent articles from Nick Alberga