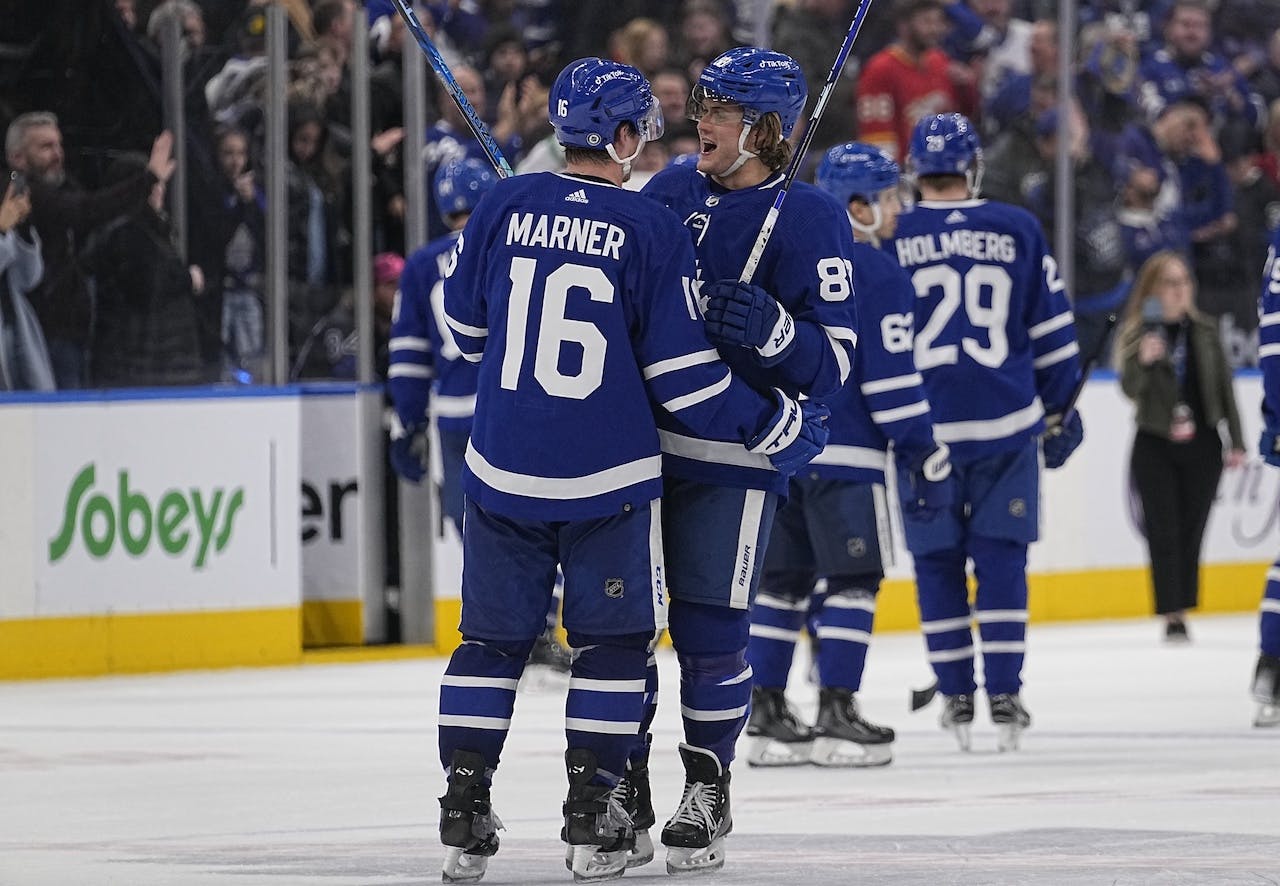 By Nick Alberga
1 month ago
You know the Leafs are red-hot when they’re winning games in overtime, too.
Mitch Marner potted the OT winner as Toronto outlasted Calgary 5-4 to improve to 2-6 in the extra frame this season.
With his first period assist on William Nylander’s first of the night, Marner extended his point streak to a ridiculous 22 games. Meantime, the Leafs point streak is now up to 14 (11-0-3), which is two games shy of the team record.
Speaking of Nylander, the 26-year-old was incredible on Saturday night notching his first career five point game (two goals, three assists) factoring in on all five of Toronto’s goals. He was everywhere. Meantime, Auston Matthews picked up a goal and two helpers while Michael Bunting put an end to an 11-game goalless drought.
Toronto went 3-for-6 on the PP.
Since November 1st, the Leafs are 14-1-4. Additionally, they haven’t lost in regulation since November 11th —which is insane.
Muzzy’s Muzings:
OT STRATEGY
In hopes of generating a different outcome in OT, Sheldon Keefe elected to start David Kampf, Rasmus Sandin and Timothy Liljegren. And full credit to him, it worked. Jonathan Huberdeau took a high-sticking penalty off the opening draw and the Toronto power play made Calgary pay for their lack of discipline. All in all, I see what Keefe was thinking: Gain possession, then get the big boys on. In the end, it all worked out. Furthermore, I’m curious to see what they elect to do next time they get to overtime.
WILLIAM NYLANDER
All this talk about Matthews’ next contract, what about Nylander? The 26-year-old now has seven goals in his past eight outings and 17 in 29 overall. I’m no mathematician, but I believe that’s around a 45-goal pace. And once again, it’s coming at a perfect time, he’s eligible to sign an extension as early as July 1st. That’s going to be one fascinating negotiation, that’s for sure. What a performance.
WAYNE TRAIN
I know he got sucked into a minor, but I had no problem with Simmonds running to the aid of Matthews in the first period. Not only does that type of stuff go a far way in the room, but it also sets a precedent for the opponent that it’s not going to be a free skate out there. Indisputably, this continues to be one of the more spirited debates in this market, especially when you tie in the analytics element to the conversation. At any rate, we’re all entitled to our opinion —call me old school..whatever.
MATTHEWS PICKING UP STEAM?
If you’re keeping score at home, which I know you all are, Matthews now has six goals in his past seven outings and 14 in 22. Moral of the story: He’s starting to cook, and it wouldn’t be a bad idea to lay some coin on Papi to win the Rocket Richard Trophy again this season. By the way, you can do that over at PointsBet Canada. This is going to be fun to monitor.
LEAFS PICK UP MURRAY
Make no mistake about it, Murray did not have his A-game on Saturday night. Having said that, I thought the Leafs did a great job of responding and picking him up after he surrendered a couple of softies. All in all, Murray’s been exceptional lately. On top of that, it’s great to see Toronto finding different ways to win. On Tuesday in Dallas, he was the main reason, tonight, his teammates returned the favour. You love to see it.
Highlight of the Night:
WHAT’S NEXT?
The Leafs are off until Tuesday when they host the Anaheim Ducks. They’ll be looking to avenge a 4-3 OTL in Anaheim on October 30th.
PSA: Don’t forget to check out ‘Leafs Morning Take’ with yours truly, Nick Alberga, and former Leaf Jay Rosehill every weekday morning LIVE at 11 a.m. ET on The Nation Network YouTube page.
Editorials
News
Recent articles from Nick Alberga