Michael Bunting is just what the Leafs need, but they still need to identify where 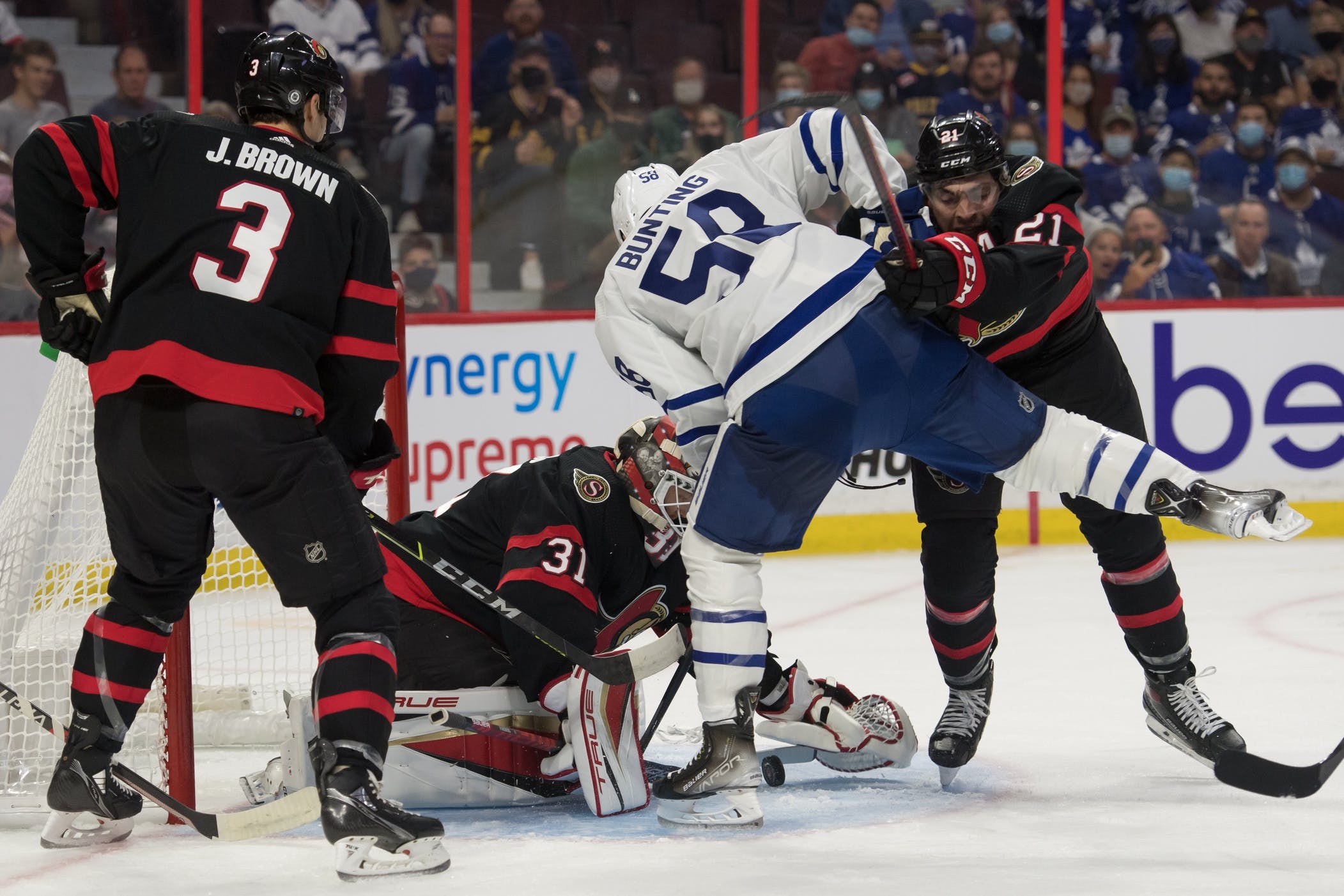 By Jon Steitzer
1 year ago
It feels strange to say that a 26 year old rookie making less than $1M/yr might not be ready for the Leafs top six, and be prepared to meet resistance from making that statement, but here we are. Bunting, who has been very solid with four goals, and seven total points through his first 16 games with the Leafs is doing what could have reasonably been expected of him, but at the same time, I can’t help but wonder if his modest success is coming at the cost of slowing down the Leafs top six.
Earlier in the year it was the case for Nick Ritchie. He simply wasn’t a fit with Tavares and Marner and then Matthews and Marner. As time progressed onward we found ourselves with Michael Bunting seeing time with the Auston Matthews line, and what we’ve seen is a steady cooling off of Bunting’s game as well as a number of question marks around how well Auston has been doing this year. Presumably, this duo isn’t a match, and Bunting could be better off in a sheltered situation alongside Alex Kerfoot, assuming that placing him back at center is an option again.
Of course, when you look at the numbers for Bunting (factoring in the small sample size), Bunting has generally been making all of his linemates better this year. Nylander and Matthews have had more chances and better chances when they’ve been on the ice with Bunting. The same can be said of Kerfoot and Tavares as well, and really the players he’s struggled to produce with are Spezza and Marner.
The big exception you’ll see in the table above is that while Bunting has helped his linemates be better, he hasn’t been connecting with them for actual goals at the frequency you’d hope for. Only Kerfoot and Bunting have a positive goal differential together. Kase and Bunting have also be on for one goal together and none against in their six minutes of icetime together.
While Bunting has enjoyed a fairly good shooting percentage of 10.34% at 5v5, when you look at the on-ice shooting percentage when he’s out there, it drops to 5.93%, so either Bunting and his linemates have been unlucky, as the number of chances and quality of chances above would indicate, or there is a disconnect between Bunting and his linemates that prevents them from completing the opportunities they’ve been getting.
It is a bit interesting how Bunting’s points have been produced. First of all, Bunting has been in on seven goals, four of them his own, and assisted on three. The next interesting piece is that all three of Bunting’s assists are primary assists. The most interesting thing however is that on goals that Bunting has been in on, there have been 12 different players involved, and only Jason Spezza has two points on those seven goals. Spezza assisted on one even strength and one powerplay goal by Bunting. So I guess what we are seeing is Bunting yet to connect with one particular line as of yet.

When it comes to on-ice shooting percentage with Auston Matthews, Bunting and Matthews have a 4.17 shooting percentage together, not exactly something that would last forever with either one of them, but maybe a sign that right now removing Bunting from the line might potentially give Matthews a chance to jump start his outputs. On the other side of the coin Bunting’s individual shooting percentage closely aligns with what he gets when he’s on the ice with Spezza or Kerfoot, perhaps a reason to try them together more frequently.

Bunting’s shooting percentage has been remarkably consistent throughout the season, but there has also been a reduction in his higher volume shooting over the past five games. And while he has had two games earlier in the year with no shots at all, his recent decline in opportunities is potentially hurting him as well as his line as greasy shots and goals are a definite need for the Leafs.
In fact, the greasiness of Bunting in general is on the decline. In the last five games there has just been one hit logged by Bunting, and just two hits in the last eight games. While we still see Bunting doing some of the agitating things we know and love from him, the measurable tomfoolery has surely declined.
So what does all of this mean? Well, it certainly means that keeping Bunting with Matthews isn’t the end of the world, and there is a very good chance that he their shooting percentage will normalize over time. The same could be true of putting Bunting with Nylander and Tavares where he might be a tad redundant as Tavares does some good pooper scooping in front of the opposition net already. Neither of these options put Bunting with Kerfoot which would possibly create the best secondary scoring option for the Leafs.
Instead at least in the short term we’re seeing Bunting assigned to the fourth line with Spezza and Simmonds. I’m not sure what all will be accomplished by this line, but it does allow the Leafs to try a few other things with other players not named Bunting. Unfortunately for Bunting, who has played well so far this season, he hasn’t always produced the results he needs to in order to stay in the top six. Still, as an agitating winger on a great contract, there will always be a place for Bunting somewhere in the lineup.
Data from Hockey Reference, PuckPedia, Natural Stat Trick, and Evolving Hockey