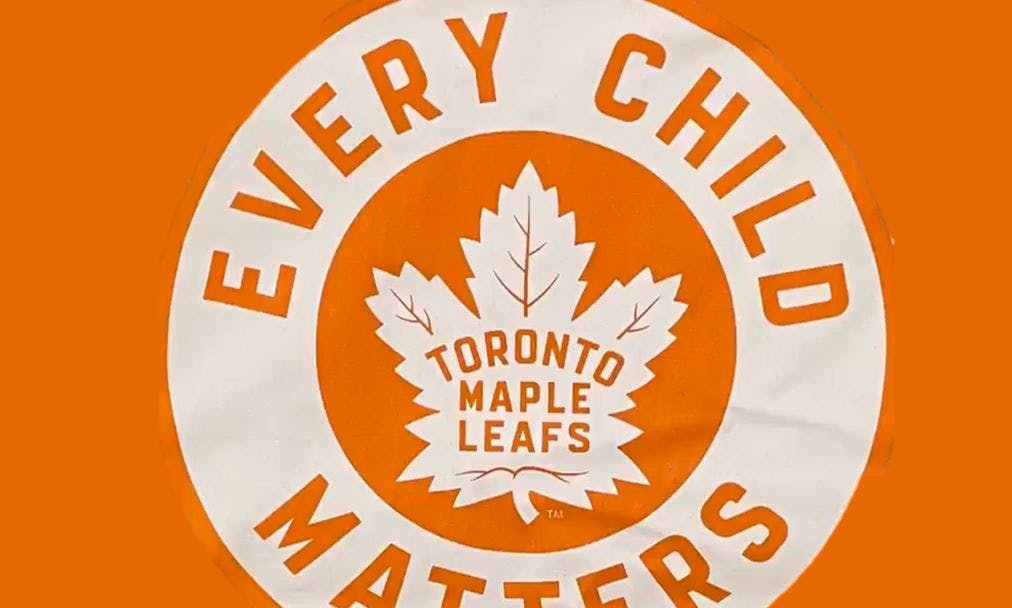 By Jon Steitzer
1 year ago
It is nice to see the Leafs prepare a message for Truth and Reconciliation Day, something that I’m hopeful that settlers of Canada come to appreciate the importance of addressing the unspoken of genocide that has been going on for generations. Hopefully this is the start of the conversation, not just simply a day, and hopefully for the Leafs this means at the very least including land acknowledgements as part of their pregame.

It’s been some time coming, but we’re starting to see the early cuts from Leafs camp. This morning it was William Villeneuve heading back to Saint John.

This afternoon we see a couple of players Marlies bound for the opening of their training camp.
Obviously with both of these players being on AHL contracts it was going to be an absolute stretch that either was going to receive a NHL deal, and in Clune’s situation, as the captain on the Marlies and his NHL days behind him, it’s incredibly important to get him back to where he does the organization the most good.
Curtis Douglas is also going to benefit for more time playing with the teammates he’ll need to establish himself with.
Some of the other younger Marlies bound players like Filip Kral, Mac Hollowell, and others that aren’t necessarily being considered for NHL depth roles this year will probably not be too far behind.
Speaking of cuts, today was also the first day of NHL waivers, and while the Leafs didn’t waive anyone, we might as well share the list of who is out there…
Will Bitten is certainly an interesting name, as is Cam Dineen. If the Leafs are interested in collecting more Soo Greyhounds, both Blake Speers and Tim Gettinger are present, and if Toronto feels they need longer term goaltending depth, Keith Kinkaid is one of the three goaltenders available, but he’d still need to clear waivers for the Leafs to put him where he’s needed.
Given how the Leafs will have enough challenges getting their roster to where it needs to be, it’s safe to say there won’t be any interest in early cuts from other teams.

So it’s likely that group one will be one of the two teams in the Blue and White game tomorrow, and while Matthews is listed here, the reality is this…
The idea of putting Mikheyev on the Tavares-Nylander line is an interesting one, and we’ll see what comes of that. Some defensive responsibility to offset Nylander and some speed to offset Tavares could be interesting. The use of Spezza in the rushes leads me to believe that he’ll potentially be stepping in for Matthews, but that’s just a guess.
We’re also seeing the defensive pairings that we’re more accustom to, and will likely see going forward.
Group 2 is much more of a mixed bag when it comes to lines. The Kampf line has been somewhat of a staple of training camp, and it will be interesting to see what happens with Gusev following his next outing. It’s safe to say he’s been incredibly underwhelming so far. On the other hand it will be interesting to see if Bunting and Ho-Sang, who have been doing great, can elevate Kirill Semyonov.
The Kerfoot line is certainly an experiment, but it appears to be giving Robertson his best shot. I’d expect to see a lot more mixing and matching within this group than group one. The same goes for the defense pairings, that look quite usable if it was the Marlies, but terrifyingly bad if used as the Leafs third pairing.
We’ll see if any further changes happen between now and the Blue and White game. The Leafs said rosters were likely later today.

I’m not going to speak for everyone, but I can say that I am very excited that the Leafs have a greasy rat.
Wayne Simmonds is 100% right here, and hopefully we see this taken more seriously in all leagues, and at all levels of the sport. Playing hockey is a privilege, not a right, and if you can’t act reach the bare minimum levels of being a decent human being, you should be kicked out. Maybe the new slogan should be Hockey is for Everyone except bigoted pieces of shit.
This has got to have you feeling a little better about the season. Let’s hope they stick with this game plan, and we can enjoy the Bunting show on the second unit.
Uncategorized
Recent articles from Jon Steitzer