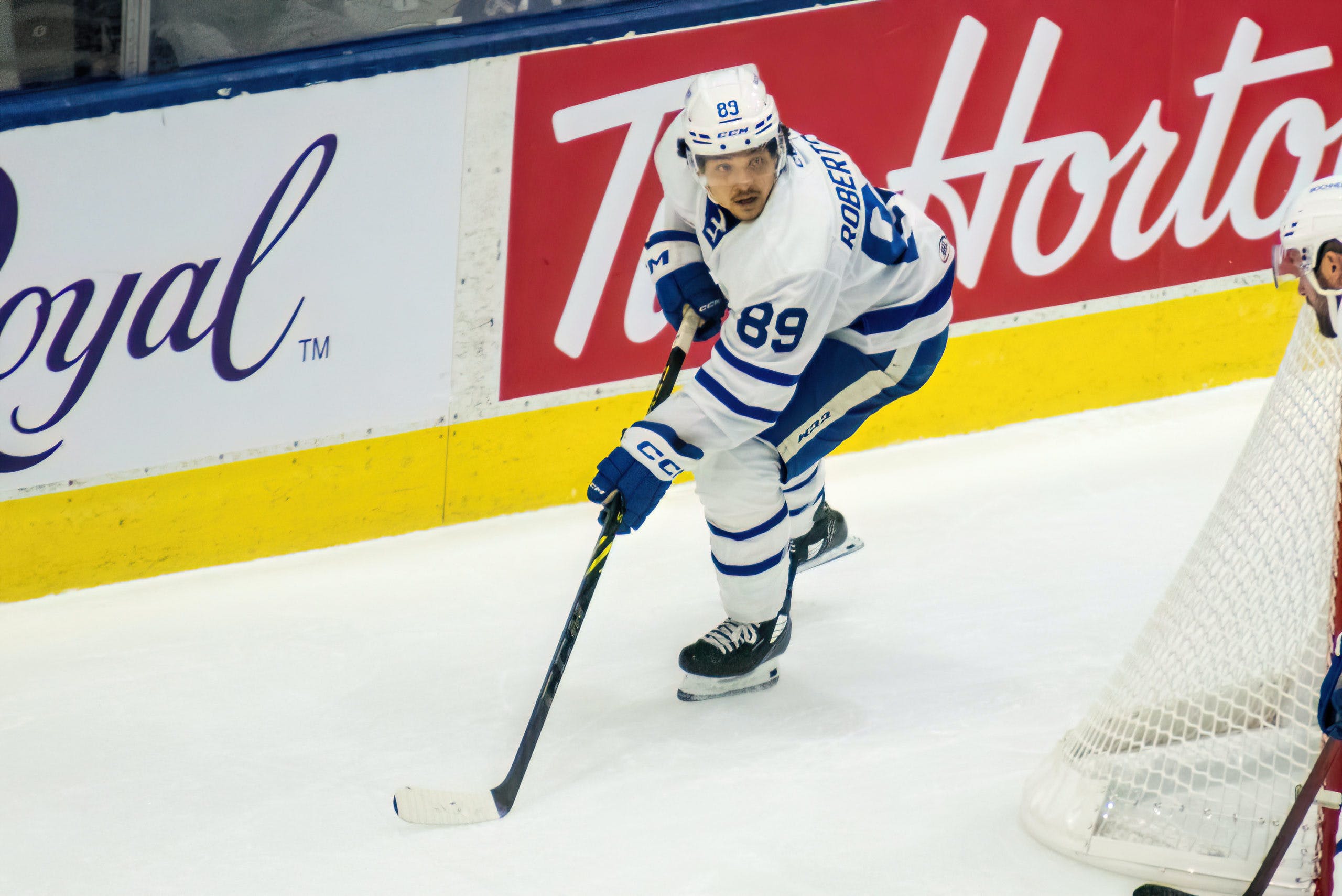 By Steven Ellis
1 month ago
The most natural progression path for a guy who leads his team in pre-season scoring is an immediate trip down to the minors, right?
That’s the reality for Nicholas Robertson, who tied Denis Malgin with eight points in exhibition play. Due to cap constraints, Robertson was sent down to the AHL to play in the Toronto Marlies’ season opener against Rochester on Friday but earned a call-up two days later after goaltender Matt Murray was placed on long-term injured reserve.
Based on the pre-season, this is where Robertson belongs. And if it ends up being an extended audition with the big club, he’ll need to do whatever it takes to stay up once the cap situation gets wonky later.
Scotiabank Arena is where Robertson deserved to be on opening night. Instead, he was getting ready to play down the road at Coca-Cola Coliseum.
“It was a mental grind, for sure,” Robertson told reporters on Sunday. “After a couple days, I kind of grasped the situation and told myself to play.”
Robertson didn’t play on Monday against Arizona, but is expected to draw in on Thursday against the Dallas Stars. That’s fitting, given Robertson’s brother, Jason, is one of Dallas’ best players.
Robertson had two points in his two games with the Marlies. You’d have to imagine they’ll keep him engaged, even if he doesn’t play every night of the western swing. All Robertson has done so far since September is put points on the board, and the Leafs will need to take advantage of that.
“He seems more developed, he seems really ready for the season,” defenseman Rasmus Sandin said Monday. “He wants to prove to everyone that he belongs. You saw it in the pre-season… he looked really good. ”
So that begs the question: who comes out? Toronto’s bottom line has been a net positive so far, so David Kampf, Nicolas Aube-Kubel and Zach Aston-Reese should be safe. Calle Jarnkrok has been a nice addition, and the main cast isn’t getting touched. That instantly makes Denis Malgin the main target, and that looks like it’ll be the case after Robertson skated with John Tavares and William Nylander on the second line during practice on Wednesday.
Bigger picture, though, allowing Robertson to earn a full-time spot is paramount. There’s no reason why he should head back to the Marlies at this stage. Did Kyle Dubas not envision Robertson having a roster spot this season when he signed Pierre Engvall to a $2.25 million cap hit this summer? Unlike Robertson, Engvall would require waivers to go down. But with Engvall holding a $1.45 million larger cap hit, it seems like the obvious choice to keep Robertson once they run back into cap problems with a healthy group later on.
Luckily, the Leafs don’t have to worry about that right now.
What matters is that he’s here now and ready to earn his spot. Robertson missed most of last season with a leg injury and had a rocky 10-game run with the Leafs. He looks more confident, aggressive and he’s fully healthy, which is why we saw an all-new Nick Robertson during pre-season. There has never been a better version of Nick Robertson. Maybe getting sent down to the AHL after a fantastic exhibition slate is what he needed as motivation to take the opportunity by the horns this time.
It’s clear from Robertson’s body of work early this year – including his impressive AHL stint – that he’s ready for big things. Now it’s time for him to show it for real.
Editorials
Recent articles from Steven Ellis