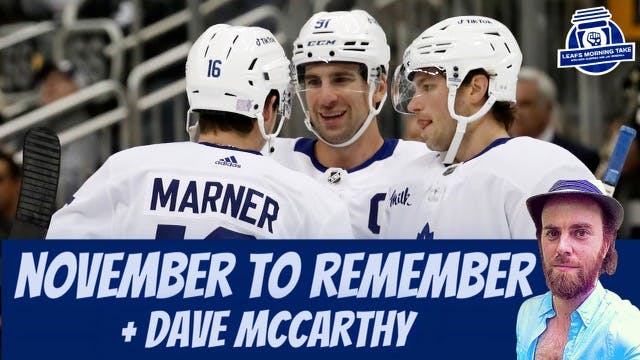 By Nick Alberga
2 months ago
And we’re back after another successful weekend for the Maple Leafs (13-5-5).
First, they went into Minnesota on Black Friday and gutted out an impressive 4-3 victory. Then, they doubled down with an impeccable 4-1 win in Pittsburgh on Saturday night.
Once again, I flew solo for the Monday edition of Leafs Morning Take. All in all, it was a jam-packed show. As per usual, Rosie dropped by for another cameo appearance (3 Hits With Rosie) to share his thoughts on Toronto’s red-hot weekend. Also, Dave McCarthy of NHL.com (Leafs Reporter) and SiriusXM NHL Network Radio dropped by, we discussed Toronto’s November turnaround.
Furthermore, the Leafs will try to make it a perfect 4-0-0 road trip tonight in Detroit. The Red Wings have also been hot, they’ve won four straight games. With that in mind, here’s my PointsBet Canada bet of the day.
Rosie will be back in the mix tomorrow for the Tuesday edition where we’ll recap the game plus get Rosie’s extended thoughts on this past weekend. After tonight, the Leafs will have just one game remaining in November. They’re 9-1-3 so far.
Don’t forget to subscribe, like, and leave us a review wherever you’re checking us out!
Shows
Recent articles from Nick Alberga