Nylander and Tavares reunite to stomp a mud-hole in the Islanders: Muzzy’s Muzings 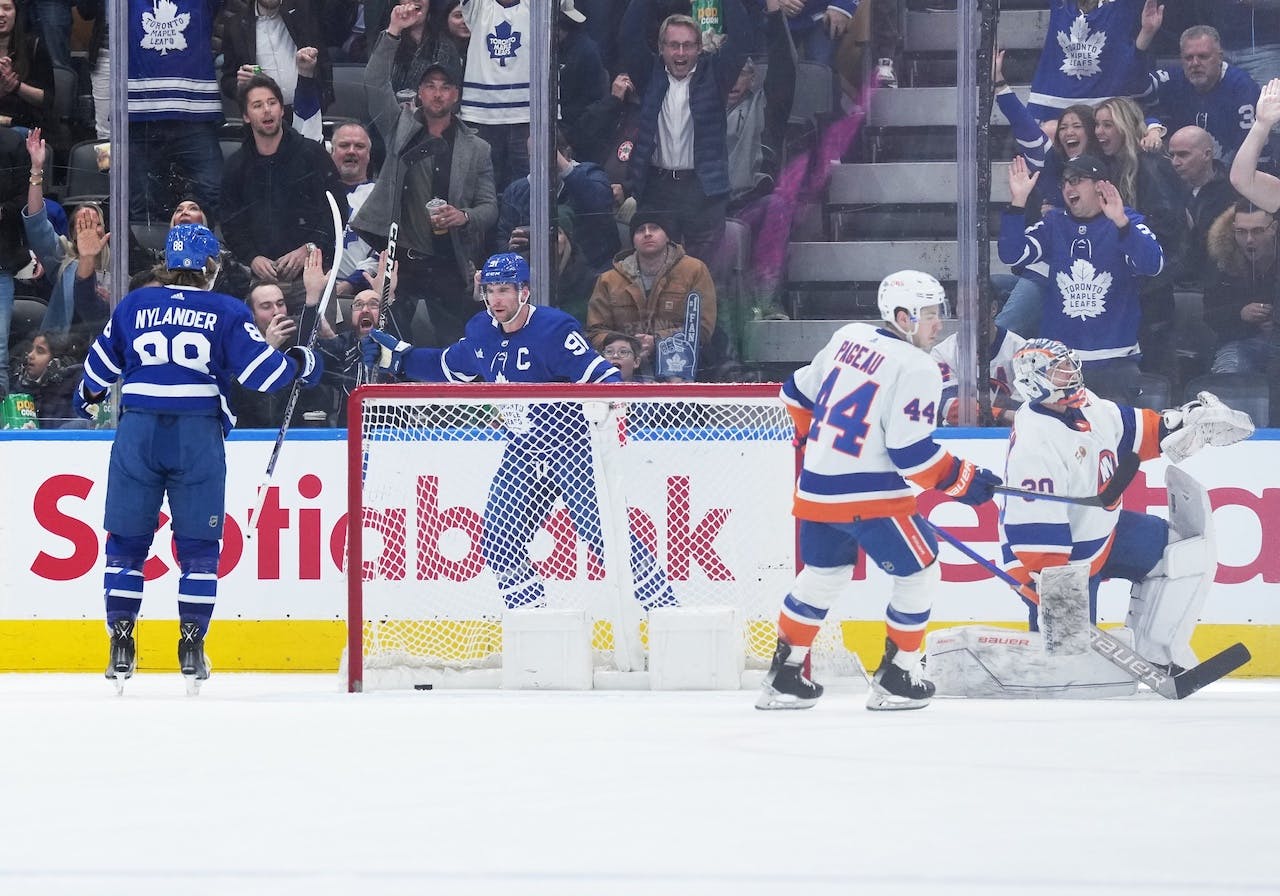 By Nick Alberga
12 days ago
He’ll never admit, but I’m sure Tuesday night’s beatdown of his former mates felt pretty damn good for John Tavares.
The captain notched a goal and an assist while William Nylander erupted for his second four-point outing (two goals, two assists) of the season as the Leafs opened up their five-game home stand with a convincing 5-2 victory over the New York Islanders (23-21-5).
Toronto improved to 29-11-8 overall and 18-3-4 at home.
Thanks to his big night, Nylander (25, 26), who hit the 25-goal plateau for the third time in his career, is now just one point shy of 400 for his career. Meantime, Auston Matthews potted his 25th goal to extend his unofficial point streak to 10 games and unofficial home point streak to 16 games.
Speaking of which, I can tell you officially that Mitch Marner’s 20 game home streak came to an end. What a phenomenal run.
Ilya Samsonov made 31 stops to improve to 13-0-1 at Scotiabank Arena this season. Justin Holl notched two assists.
MUZZY’S MUZINGS:
GOOD RESPONSE AFTER SLOW START
As expected, the Islanders came out hungry, and the Leafs came out like a wounded bunch fresh off a staggering loss to an AHL roster. Perhaps I’m being a bit harsh, but that wasn’t the type of start I’m sure Sheldon Keefe was looking for after whatever that was on Saturday night against the Montreal Canadiens. I can only wonder what was said in that room in the first intermission. That’s because, as they’ve done a lot this season, the Leafs looked like a different team in the second period. Of course, that’s been their bread and butter all season long. Good response!
REUNION NIGHT
Imagine being Sheldon Keefe and knowing you have two lethal duo combinations in your back pocket at your disposal whenever things go awry. After a stagnant first, Keefe decided to reunite the Mathews/Marner and Tavares/Nylander combos in the second. And the results were exemplary. Personally, I thought the Bunting/Matthews/Marner trio set the tone for the rest of the night with an awesome first shift; one that saw them hem the Islanders in their own zone for a good chunk of time. After that, the flood gates were open and New York had minimal answers. Most specifically, I thought the Tavares/Nylander duo was unstoppable. They did whatever they wanted. What a treat.
WILD BILL
The way he’s been playing, Willy Nylander would probably make Maple Leafs legend Par Lindholm look like an All-Star right now. Unbelievably, the 26-year-old has now notched four points in a game twice already this season. He’s been an absolute monster. On top of that, it really hasn’t mattered who he’s played with —he’s done it with everyone. Personally, I’m just living in the moment and enjoy the ride. Indisputably, Nylander’s going to get paid by someone this summer.
STRETCH PASS
Not that I’m a big x’s and o’s guy, but a big difference I noticed after the first period was Toronto’s utilization of the stretch pass. On more than one occasion, namely the Matthews beauty breakaway goal, they had a lot of success stretching the Islanders out. Even Ilya Samsonov got into the act with a wicked assist. I thought Justin Holl led the way in this department making several fantastic passes. We all know this by now, but the Leafs are tough to handle when they’re playing with speed and moving the puck with pace. Over the final two periods, had their way with the Islanders, who had no match for them offensively. Personally, I felt bad for Ilya Sorokin. He now knows what Jacob deGrom felt like all those years with the New York Mets. Where’s the run support?
HIGHLIGHT OF THE NIGHT:
WHAT’S NEXT?
Game two of the five game homestand will take place on Wednesday night as the Leafs host the New York Rangers. That will be the second of three meetings between the two squads this season. Back on November 15th at Madison Square Garden, New York took Round 1 with a 3-1 victory.
PSA: Don’t forget to check out ‘Leafs Morning Take’ with yours truly, Nick Alberga, and former Leaf Jay Rosehill every weekday morning LIVE at 11 a.m. ET on The Nation Network YouTube page.
Editorials
News
Recent articles from Nick Alberga