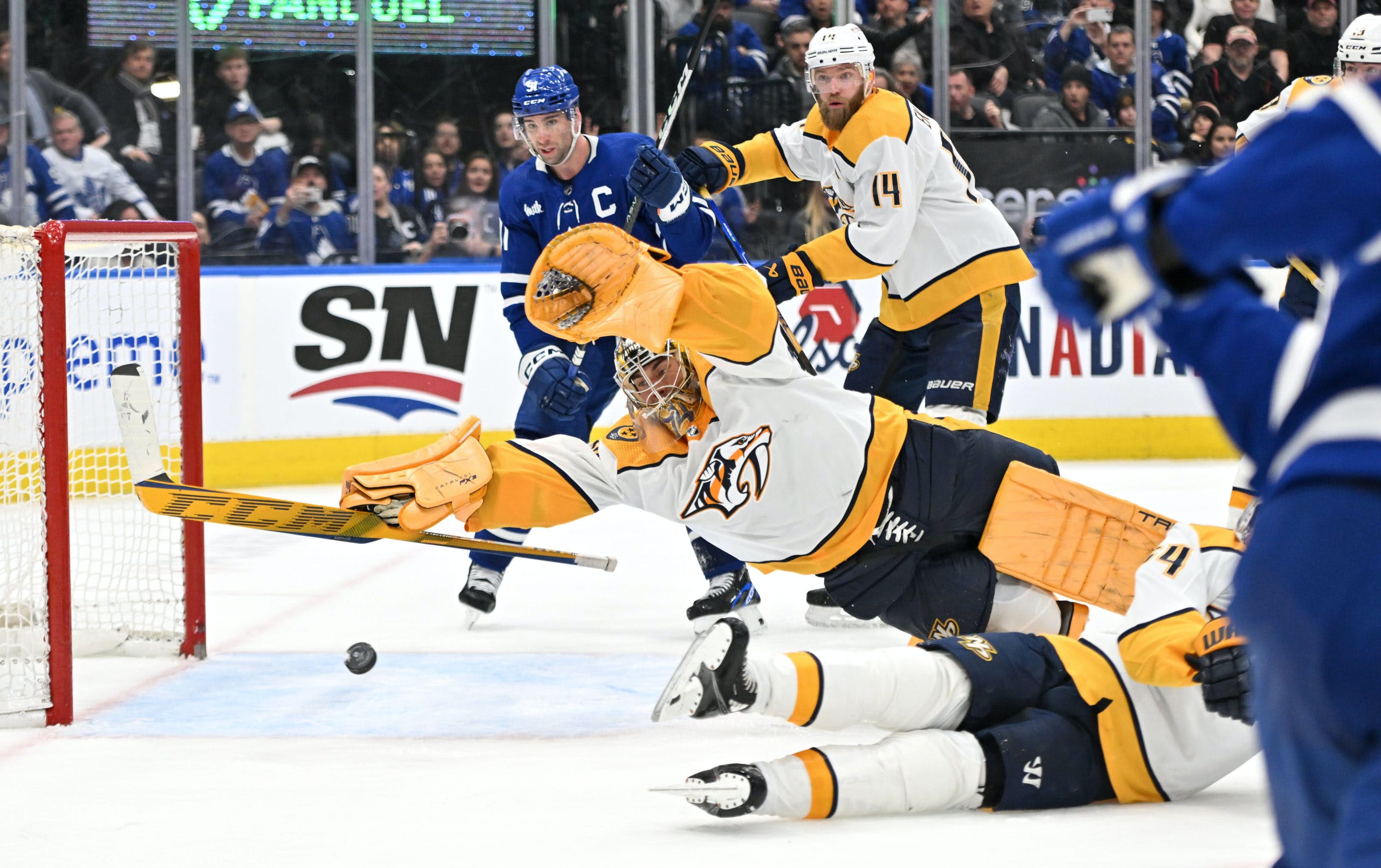 By Jon Steitzer
21 days ago
The Predators had been riding a hot streak, largely due to the impressive goaltending of Juuse Saros, but as good as Saros was, the Matthews-less Leafs managed to inch their way to victory courtesy of a late 3rd period powerplay.

The Leafs were dominant over the Predators throughout the game, out-chancing them consistently from the onset of the game. Though while the chances heavily favoured the Leafs, the Predators made up for it when it came to quality, and the Preds enjoyed 85% HDCF% in the second period at 5v5 and Murray limited Nashville to just one goal in that frame. While the Leafs were the more aggressive team and had the xGF% advantage in the first and overall throughout the game 5v5, the Preds did push back with greater xGF in both the second and third periods.

Most of Nashville’s chances came while they were sitting right on top of Matt Murray, and it’s a credit to Murray’s performance that he limited Nashville to just one goal.
At the other end the Leafs also had a presence down low, but had a spike compared to recent games where they were using the point shot a bit more. I think the variety of shooting locales can somewhat be attributed to the absence of Auston Matthews and the usual “pass it to Auston” mentality.

The Nylander at center experiment

I am somewhat delighted to announce that Toronto didn’t sink into the earth as a result of Nylander taking on more responsibility. He led the Leafs forwards in 5v5 ice time at 15:01, and 69.70 CF%, 69.93 xG%, both unquestionably nice numbers. He didn’t do as well when it came to faceoffs as he won just one of the six draws he took, but that seems like something that could be fixed by having him spend half an hour of practice hanging out at the faceoff dot with Manny Malhotra.
Nylander walking away from the game with two assists, playing the second most ice time out of forwards (penalty kill brought Marner up ahead of Willy) is very encouraging and if Auston isn’t good to go for Thursday night we’ll see if Nylander can show that he can be a potential top six center depth option which frees the Leafs up a bit more when it comes to their trade deadline options.
Also, some credit where credit is due, Bunting and Engvall played strong in support of Nylander, and the Tavares line didn’t disappoint as they also outplayed their competition.

Morgan Rielly has certainly taken more criticism than he deserves over the past couple of weeks and last night was another night where he deserves credit for largely keeping the puck moving in the right direction. That said, when you look at his xG% (41.44 at 5v5) and his HDCF% (37.5 at 5v5) you can see that the chances are better for the opposition than what is being created when he’s on the ice.
There are certainly qualifiers here. The first is that Rielly is without his usual partner, TJ Brodie. Brodie understands the sins of Rielly that he needs to make up for, Justin Holl being asked to take that on might be above his pay grade.
The second is that absence of Auston Matthews is going to impact him defensively too. There is a steep drop off from Matthews to Nylander at center from a defensive perspective and Rielly was on with Nylander a significant amount.

As we talk of Matthews-less, Brodie-less, Nylander at 1C, and other adventures, we should appreciate who had to take on the bulk of the responsibility for keeping the Leafs out of trouble. Murray stopped 29 of 30 shots, 11 of 12 High Danger shots, and had one goal against to an xGAA of 2.5. That’s definitely a goaltender that isn’t in the midst of a slump, and that is certainly not Rielly dragging him down.
While the narrative was that it might be time to panic about Murray, it’s worth noting that he doesn’t have a sub .800 save percentage game this season out of his 17 games, and just 4 games that are sub .850, and he managed to pick up a win in one of those four games anyway.
In summary, Matt Murray isn’t giving Toronto fans anything to worry about, and an almost identical sentiment can be expressed about Ilya Samsonov who will be starting Thursday night against Detroit, a team he posted a .957 save percentage against in his last outing.
Data sourced from Natural Stat Trick
Editorials
Recent articles from Jon Steitzer