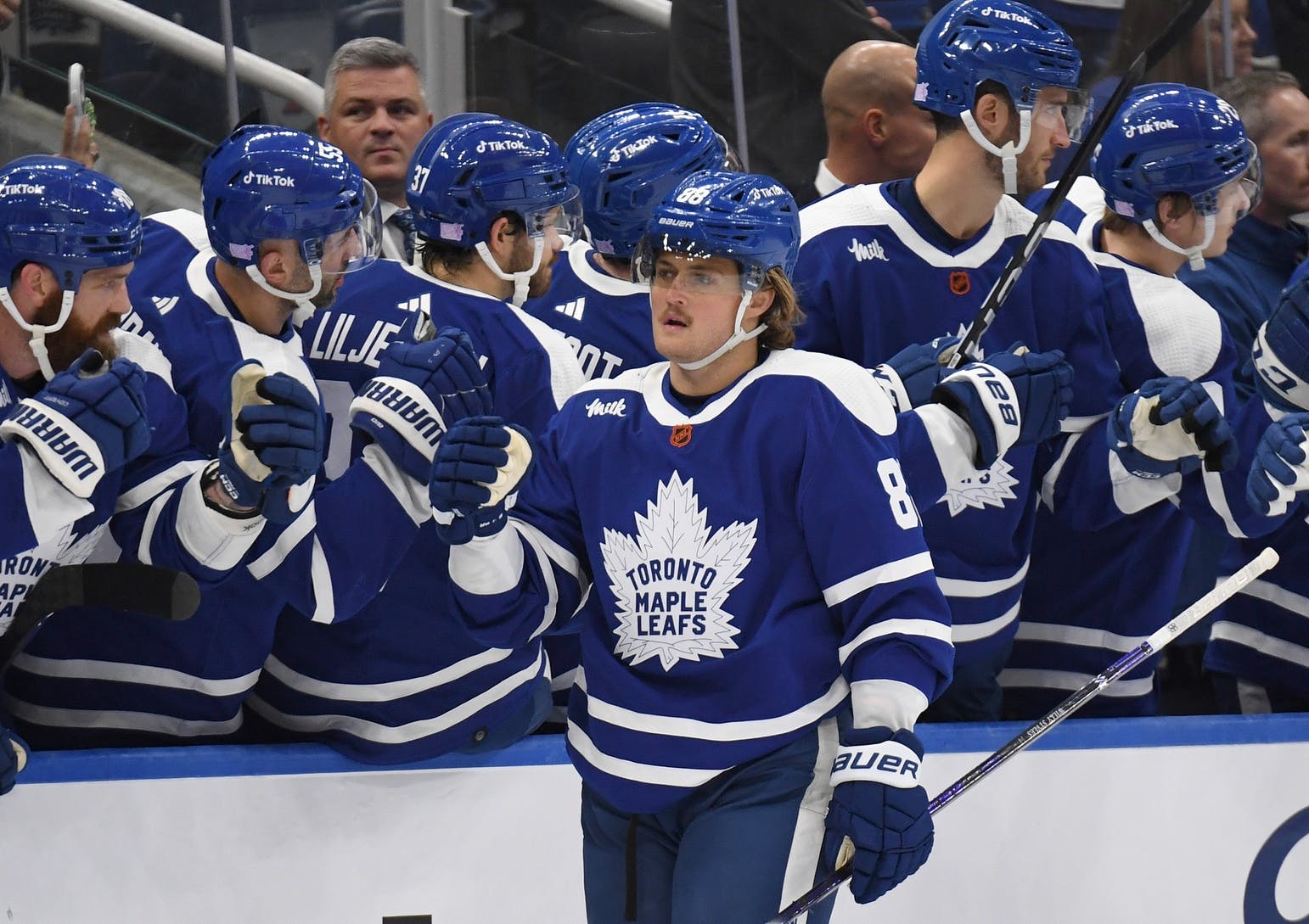 By Nick Alberga
2 months ago
You can make it eight straight losses for the Buffalo Sabres (7-11-0).
William Nylander scored twice while Mitch Marner notched two assists to extend his league-high point streak to 12 games as Toronto took care of business with a 5-2 win over Buffalo. The Leafs, who went 2-for-2 on the power play, improved to 6-1-2 in November and 10-5-4 overall. They’re 7-2-2 at Scotiabank Arena.
Meantime, John Tavares tallied a goal and two helpers as Toronto ended a three-game skid against Buffalo. Also, Matt Murray made 25 stops to improve to 2-1-1 on the season. Calle Jarnkrok (4) and Mark Giordano (1) had the other goals for Toronto.
Tough times for Don Granato’s squad, they haven’t won a game since November 2nd and have been outscored 38-18 in the process.
Muzzy’s Muzings:
IDEAL START
Now that’s the kind of start I’m talking about. By far, that was Toronto’s most dominant first period of the season. They sucked the life out of the struggling Sabres, something I felt was a big key to success. You don’t want to give a struggling team hope, and full credit to Sheldon Keefe’s squad, they came ready to play. Fantastic job.
PP BOUNCEBACK
If you read my pregame musings, I felt like Toronto’s power play had a chance to a be big-time story Saturday night and it didn’t disappoint. In fact, it played an instrumental role in this beatdown of the Sabres going 2-for-3 after a 1-for-5 showing against the Devils on Thursday night. They were really snapping it around; Buffalo had no answer. Coming into the night, Buffalo’s the Sabres PK ranked bottom-five in the league. Yeah, that didn’t improve much in this one.
WILLY STYLES
Quietly, Nylander is having himself a year. And, by the way, it’s coming at an opportune time.
Furthermore, the 26-year-old has really started to evolve as a player, he’s no longer one dimensional. I’ve really liked and appreciated his all-round game this season. Unfortunately, depending on the way you look at it, in addition to Auston Matthews, Nylander’s also eligible for a contract extension next summer. That’s going to be an interesting negotiation, that’s for sure.
REVERSE RETRO RATING
They’re cute! They’re sexy! They’re popular to boot. If you got that reference, you have my respect for life (Bring It On). It goes without saying but Toronto’s second crack at the reverse retro went much better than the first time around. Remember these? Yikes. For the life of me, I’ll never understand the grey and why that was a colour of choice. At any rate, I think the new ones are dope. And to clarify, dope means good in 2022. They didn’t try to overdo it this time, you can’t mess with the classic Leafs logo and colours, but that’s just my opinion. 10/10 from me.
Highlight of the Night:
WHAT’S NEXT?
The Leafs will wrap up their mini three-game homestand on Monday night when they host the New York Islanders. Toronto took all three meetings with New York in 2021-22.
PSA: Don’t forget to check out ‘Leafs Morning Take’ with yours truly, Nick Alberga, and Jay Rosehill every Monday to Friday morning LIVE at 11 a.m. ET on The Nation Network YouTube page.
Editorials
News
Recent articles from Nick Alberga