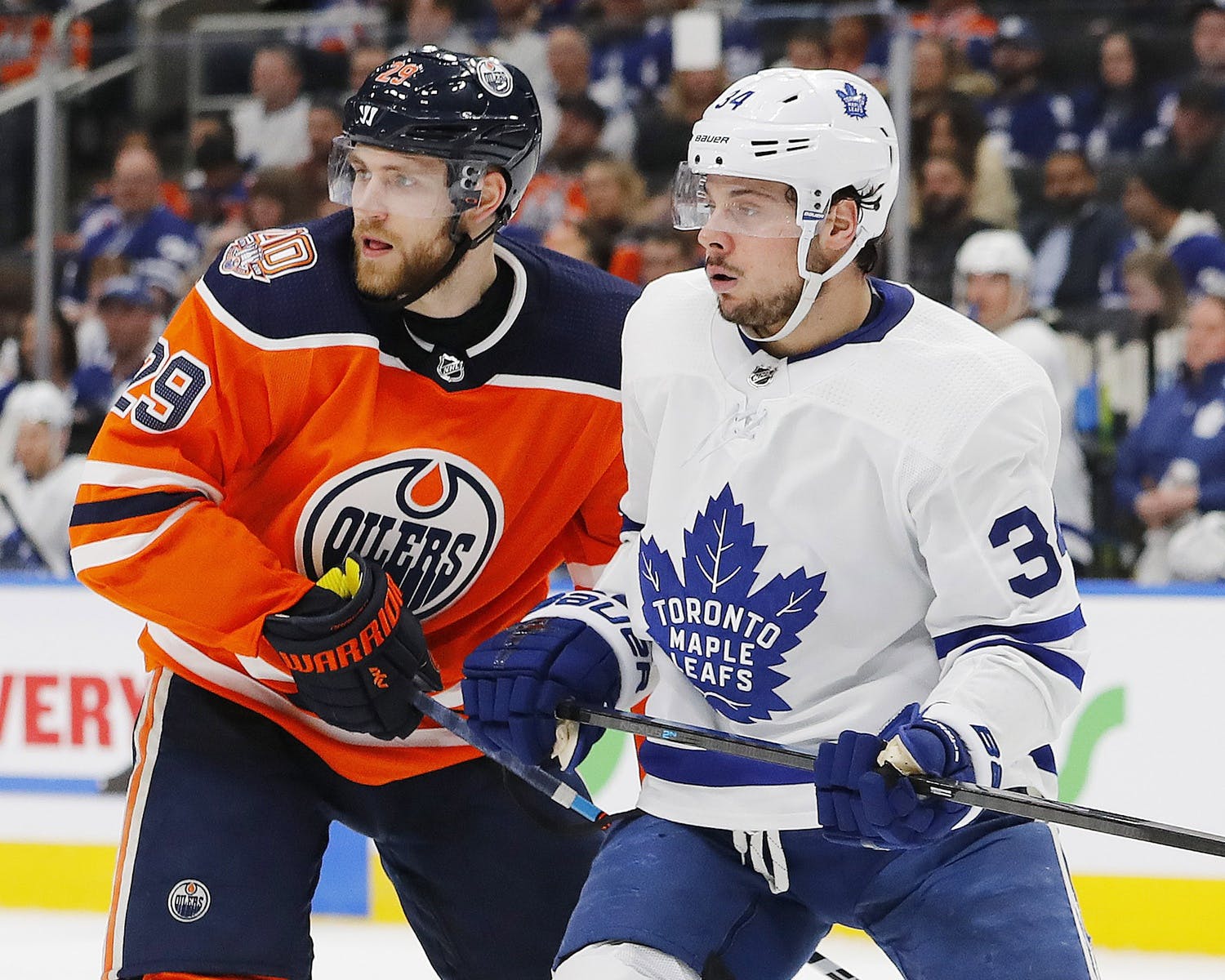 By Nation World HQ
1 year ago
by OddsShark (@OddsShark) – Sponsored Post
Something has to give between the Toronto Maple Leafs’ trend of flushing a bad home-ice loss and the Edmonton Oilers’ road-warrior ways in what seems likely to be a low-scoring game.
The Maple Leafs are -145 home favourites against the +125 underdog Oilers with a 6.5-goal total on the NHL odds for Friday at sportsbooks monitored by OddsShark.com. The teams played two nights ago, with Edmonton winning 3-1. But Toronto is 9-3 in its last 12 games as a home favourite (regular season only) with the total going UNDER in eight of those games.
Oilers vs Maple Leafs | OddsShark Matchup Report
The Oilers are an identical 9-3 in their last 12 games as an away underdog, and the total has also gone UNDER at betting sites in 13 of their last 20 games as an away underdog. The total has also gone UNDER in the Maple Leafs’ last three games.
The Oilers are 2-3-0, but as their 27th-place ranking in five-on-five shot-attempt percentage of 45.5 indicates, they are adopting a defensive posture in order to cover for their lack of a true No. 1 goaltender. Such a system will likely limit the number of attacking opportunities for star centers Connor McDavid and Leon Draisaitl, but it worked in the immediate term on Wednesday as Toronto had a season-low 0.75 expected goals for (xGF) in five-in-five play, according to Natural Stat Trick.
So far this season, Edmonton is 22nd in goals per game (2.60) and 20th in goals against (3.20). A power-play goal during Wednesday’s win pulled Edmonton’s unit up to 21st (14.3 percent), while the Oilers’ penalty killing unit is ranked ninth (87.5).
Mikko Koskinen, the Oilers’ only healthy NHL-seasoned goalie, is 2-3-0 with a 3.24 goals-against average and .906 save percentage. In four career games against Toronto, Koskinen has a 1-3-0 record with a 3.85 GAA and .869 save percentage.
The Maple Leafs are 3-2-0 in spite of their persistent issues with converting control of play – their five-on-five shot-attempt percentage of 57.8 is third in the NHL – into high-danger chances and goals. The chance to practice Thursday and make adjustments could lead to better puck luck in this rematch, although there will be some line adjustments. Center Auston Matthews (illness) was held out of practice but not ruled out of playing while left wing Joe Thornton (undisclosed) will miss the next several games.
Toronto is 13th in goal scoring (3.00) and 18th in goals against (3.00). On special teams, the Maple Leafs power play is ranked fifth (37.5 percent) and penalty killing is ranked 17th (80.0).
Frederik Andersen, who is scuffling with a 2-2-0 record, 3.01 GAA and .886 save percentage, might sit this one out in favor of backup Jack Campbell since teams typically rotate goalies in a two-game series. Campbell is 1-0-0 with a 2.01 GAA and .895 save percentage.
The Maple Leafs will make a four-game Alberta road trip next week, facing the Calgary Flames (Sunday and Tuesday) and the Oilers (Thursday, Saturday).
Check out OddsShark on Twitter and Instagram or head to YouTube for analysis on this week’s top games. As well, the OddsShark Computer serves up daily NHL picks for bettors.
Content
Odds News
Recent articles from Nation World HQ