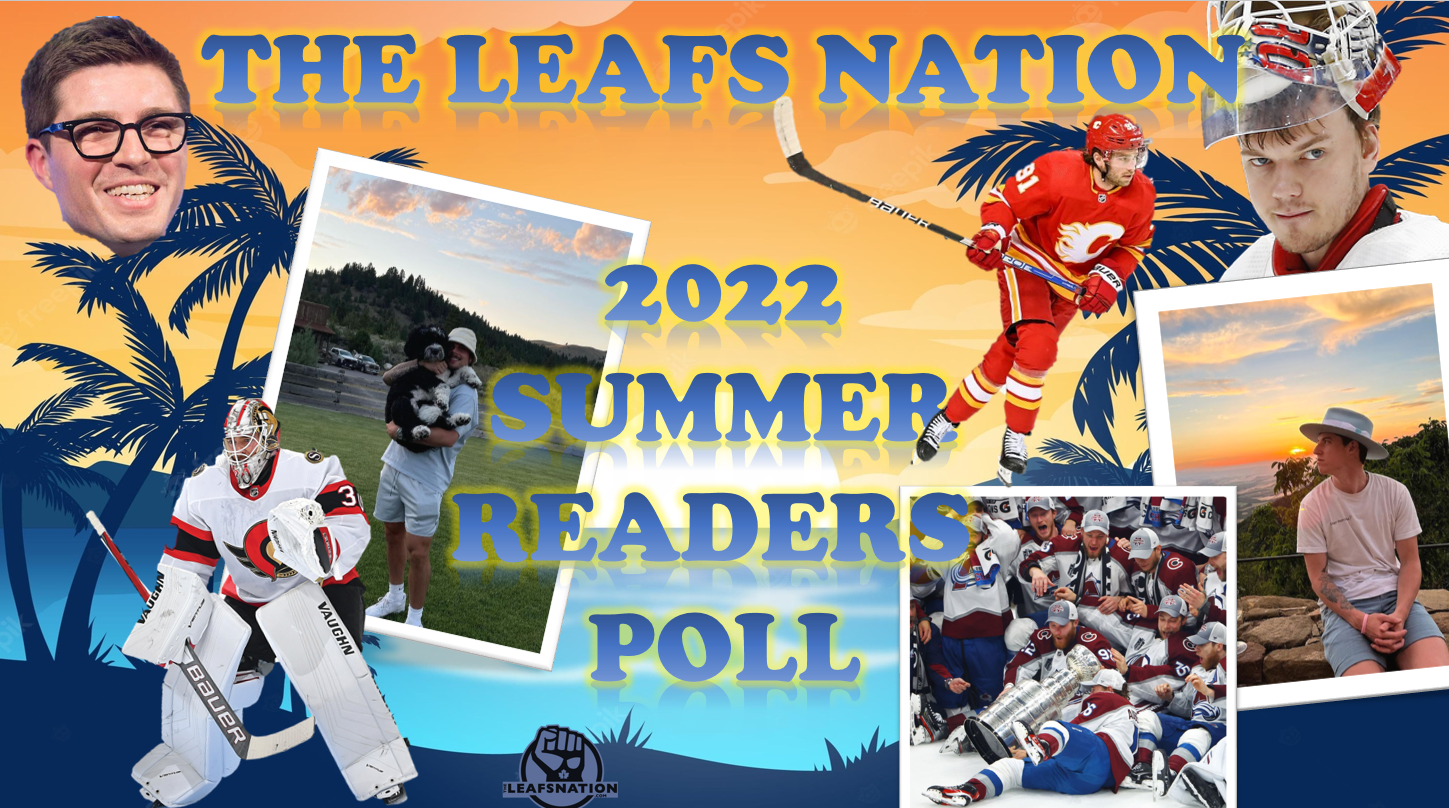 By Jon Steitzer
4 months ago
Before going into any of the results of the reader poll, I want to start by thanking everyone who participated, even those you who hilariously voted for yourselves to be the next GM, and those of you took the time to answer a survey but still felt compelled to write-in “I don’t care” as an answer. You’re the real ones.
I especially want to thank those of you who answered the last question about feedback on TLN. While the answers rolled up to equal a lot of contradictory stuff like more trade speculation vs. less trade speculation, more opinion vs. more reporting, less pessimism vs. and I quote “getting off of Dubas’ dick” there is value in all of that. I want there to be something for everyone and even at times when there is a lot of trade speculation that you can find something else worth your time on this site. I definitely hear you about getting podcasts back in the mix on the site, and we will continue fighting the war against grammatical errors. Thanks again.
Given the number of questions on the poll, we’re going to break this up into three parts, and today we’ll start with some opinions we received on Kyle Dubas and Sheldon Keefe, as well as some the Leafs contracts. And just for fun, we’ll start with a couple of light-hearted answers we couldn’t fit into our other themes.

When it comes to the Leafs goal song the runaway response was “I don’t care” which is probably to be expected. Interestingly enough letting each player have their own goal song, a long time favourite option of mine came in second.

I think this provides good context to who is answering these questions. Clearly you are a passionate bunch, but you might be a little too fired up. That seems like a good representation of Leafs Nation to me.
Now onto the front office/hockey ops questions…

When it comes to confidence in Kyle Dubas, it’s still pretty high up there. The fact that only 18% gave him a rating 5 or lower speaks to our readers still showing a lot of support for the GM, and while I question 8% that gave him a 10 as being too quick to gloss over some of his flaws, the median score of 8 seems fair.

If the Leafs were to replace Kyle Dubas it was interesting to see that Steve Yzerman is still the favourite option amongst the populous, with Jason Spezza, Hayley Wickenheiser, Brandon Pridham, and Brendan Shanahan all getting some love as internal candidates. The fact that there are still people out there thinking Mark Hunter would do something other than salt the earth is a little concerning to me, but this poll isn’t about what I think. Don’t blame me, I voted for Kodos.

That result was interesting given the high confidence our readers have in Dubas. While he seems to be well respected I guess there is also an acceptance that the results need to be better than a first round exit for the Leafs to stay the course with him beyond this season.

The results when it comes to confidence in Keefe really mirror that of Dubas. Keefe was a bit higher on the 9-10 combined percentage and didn’t have the significant lows that Dubas did, but his median score was 7.5. Again I think that’s fair while admittedly I find myself internally debating whether I view Keefe as a 6 or 7 for my personal scoring of him. Keefe to me is a good fit because he’s on the same page as Dubas and that matters. When it comes to Keefe as a standalone option that’s where I can see the lower scores, but I guess we’re not in that situation.

To me, the lower responses provided some of the more intriguing options, and the popular answers kind of steered us towards who is presently out there, the ones who got away, or those who have won recently. There also seems to be a desire for old school hard asses amongst a number of our readers, and some really want to see Jason Spezza take on a lot more responsibility right away.

I found it interesting that Keefe outscored Dubas on this question, but the numbers are close enough that I won’t overthink it. The vast majority see the duo back next year and that seems fairly likely unless the results are unfortunate this season.
Now onto some contract stuff…

When it comes to the Tavares contract the largest cohort still stands by the decision. If you combine the next two responses, 41% are now showing some hesitation, and 10% asserts they have always hated this move. I’m assuming the people who wished Tavares hit more also fall into that “always a bad idea” crowd as there isn’t much in JT’s history that supports a desire to throw a check.

Try as I might to open old wounds about the Marner contract, the majority seems to be supporting it, and even those who might not like it have become indifferent towards it. This is the most lukewarm Leafs fans have ever been on this and I’m scared.

81% said that Auston Matthews will be re-signed next summer

Honestly, yeah, he probably will be. NHL players aren’t players that typically rock the boat. Matthews could be one of them because most North American players also don’t play their pre-draft season in Switzerland, but you know what, having confidence in a deal getting done is a reasonable thing.

35% said that Rasmus Sandin is signed before training camp

This was the most pessimistic response of all our yes/no rapid fire questions in the poll. We’ve been through the Lewis Gross negotiation song and dance before and maybe that’s why it’s reasonable to assume that neither Gross nor Dubas are willing to bend. It might also be why we should start planning now for William Nylander hitting free agency in the summer of 2024 because there isn’t a lot that points to things being done swiftly.
We’ve managed to get through 12 responses in this article and we’ll have some more coming your way tomorrow focusing on trades and roster needs. Let us know what you think of your collective responses in the comments below.
More From TheLeafsNation.com