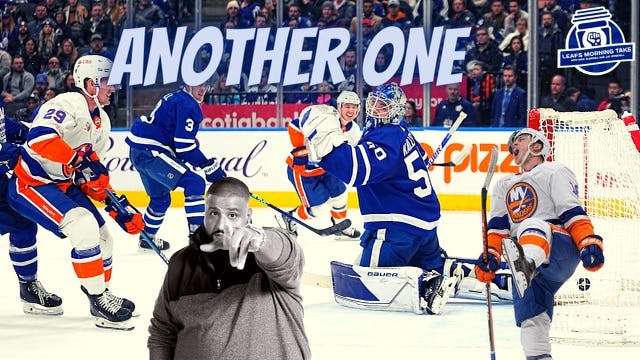 By Nick Alberga
2 months ago
Time flies: The Leafs played their 20th game on Monday night.
Crazy, right?
With that in mind, on today’s edition of Leafs Morning Take, we offered up a quarter-mark review of the season to-date. Hell, we even submitted a grade score (Note: I’m a hard marker). It’s all about the Stanley Cup Playoffs for me, I could care less about the regular season.
At any rate, we kicked off today’s show by discussing yet another OT loss, 3-2, against the New York Islanders. Anthony Beauvillier potted the game winner as Toronto fell to 1-5 in OT this season. That said, the Leafs notch at least one point for the 10th time in the past 11 outings. They’re 6-1-3 in November, and through 20 games, they’re a very respectable 10-5-5.
After that, we hit on the Morgan Rielly injury.
By the way, Rielly was placed on LTIR after we went off-air, so we’ll have more reaction coming up tomorrow. Also, Frank Seravalli will drop by as well to discuss what Toronto does now in lieu of the big injury.
Lastly, we wrapped with the PointsBet Canada bet of the day. Even though there’s only two games on tonight’s docket in the NHL, there’s a certain shot prop I’m feeling in Montreal.
We’ll be back with you on Wednesday at 11 AM ET for a preview of Leafs/Devils, plus Frank Seravalli will drop by. New Jersey hasn’t lost since October 24th, they’ve won 13 in a row.
Don’t forget to subscribe, like, and leave us a review wherever you’re checking us out!
Shows
Recent articles from Nick Alberga