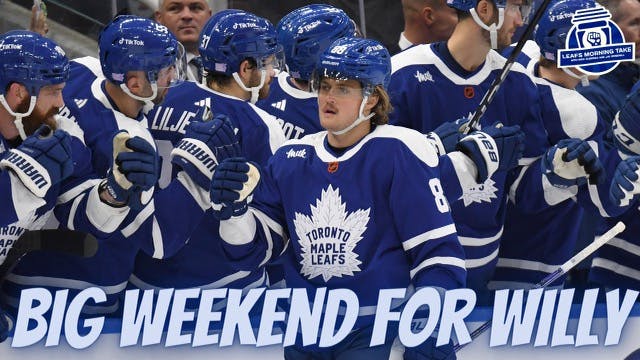 By Nick Alberga
15 days ago
And so, we’re off to the races for another week of Leafs Morning Take.
All in all, we tackled a bunch of different topics on Monday’s show. We started with the conversation stemming from Saturday night’s impressive 5-2 victory over the Buffalo Sabres. William Nylander scored twice, and John Tavares notched a goal and two helpers. After a 4-4-2 October, Toronto is 6-1-2 in the month of November. There’s no question about it, they’re feeling good right now.
After that, we touched on William Nylander. With 10 goals and 10 assists in 19 games, the 26-year-old is off to an incredible start. I know next summer’s all about Auston Matthews, but Nylander’s also eligible for an extension. Yeah, that’s not going to be an easy contract to do.
Lastly, we previewed Leafs/Isles tonight from Scotiabank Arena. The Leafs are wrapping up a mini three-game homestand while New York’s concluding a four-game road trip. It looks like Erik Kallgren will get the call in goal for Toronto.
Meantime, for my PointsBet Canada bet of the day, I’m looking at the captain to do some damage against his former mates. In fact, tonight’s game No. 300 as a Maple Leaf for John Tavares. Time flies.
We’ll be back with you on Tuesday at 11 AM ET for a full recap of tonight’s game plus much, much more!
Don’t forget to subscribe, like, and leave us a review wherever you’re checking us out!
Shows
Recent articles from Nick Alberga