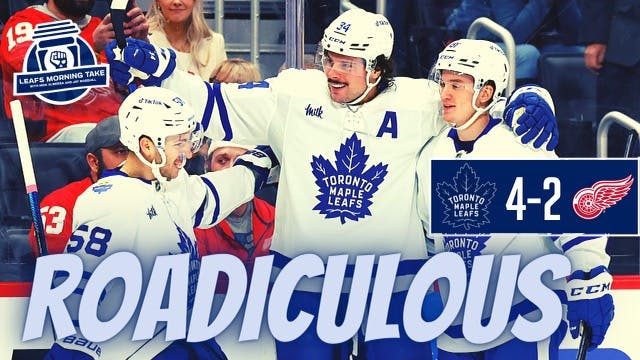 By Nick Alberga
2 months ago
For the second straight season, the Maple Leafs are having a November to remember.
In fact, after Monday night’s victory in Detroit, they’re now a combined 22-3-3 over the past two Novembers.
Rosie was back in the mix for the Tuesday edition of Leafs Morning Take. Of course, a big topic of the conversation was Mitch Marner. The 25-year-old, who’s currently riding a ridiculous 17-game point streak, will have a chance to tie the team record (18 – Darryl Sittler & Eddie Olczyk) tomorrow night at home against the San Jose Sharks.
There’s no way around it right now, Toronto is feeling it. They’re 10-1-3 in November and 14-5-5 overall. On top of that, they’ve won four in a row and are currently riding an impressive nine game point streak (7-0-2). Toronto hasn’t lost in regulation since the Hall of Fame Game against Pittsburgh 18 days ago —which is ridiculous.
Meantime, after nailing the Vikings pick on American Thanksgiving, Rosie took the wheel for today’s PointsBet Canada bet of the day.
We’ll be back with you at 11 AM ET on Wednesday as we preview Leafs and Sharks. Of course, Toronto will try to avenge that ugly 4-3 OT loss in San Jose from earlier in the season.
Don’t forget to subscribe, like, and leave us a review wherever you’re checking us out!
Shows
Recent articles from Nick Alberga