Weighing rolling four lines vs. three lines plus specialists for the Leafs 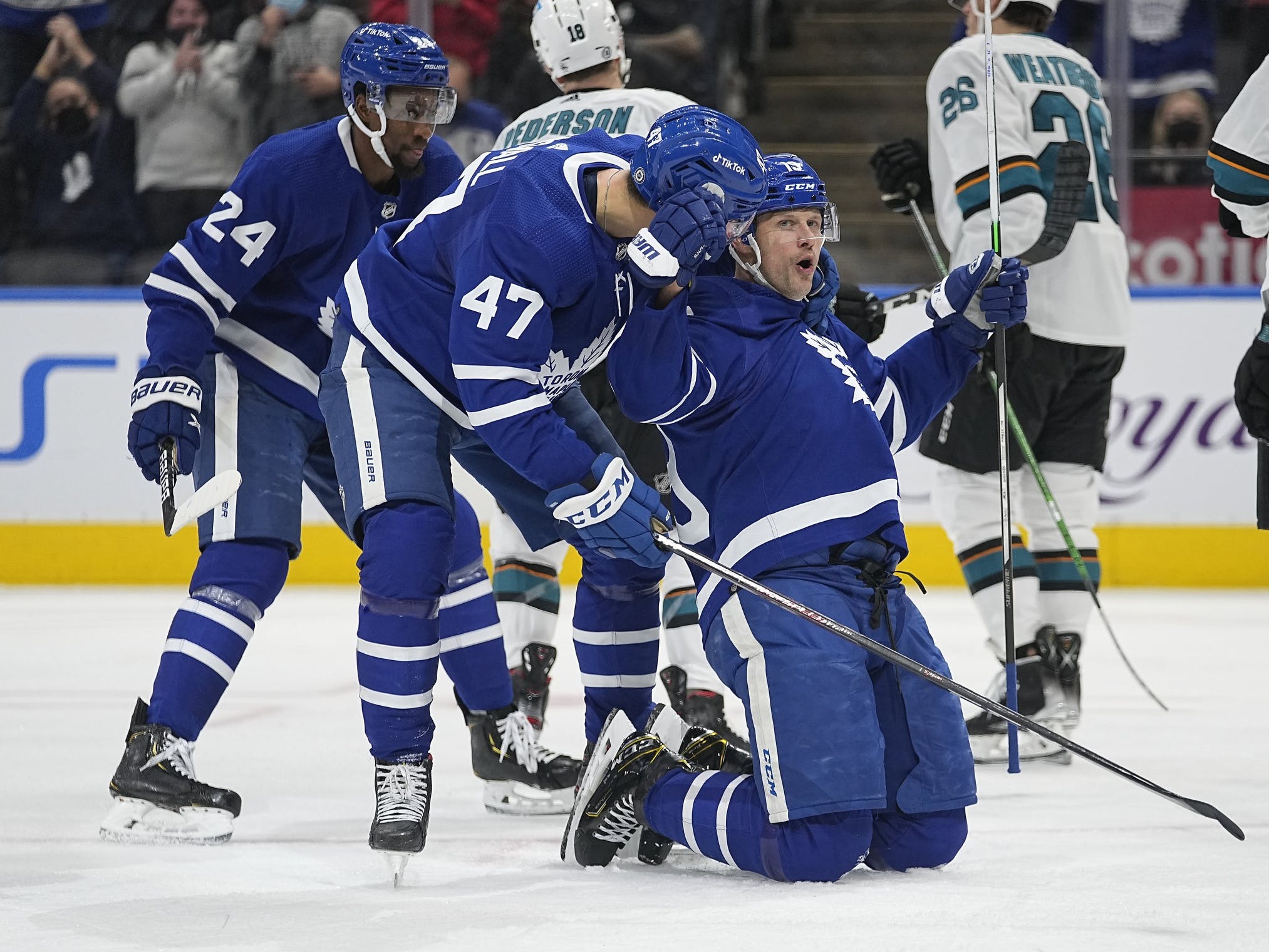 By Jon Steitzer
1 year ago
We’ve just passed the quarter of the season mark, there is a lot of hockey left, why are you making a case for a shorter bench?
One of the better parts of the season has been what Spezza and Simmonds have done on the fourth line, why would you take that away?
These are my primary arguments for no matter what seems like the better approach in the long run, in the short term the idea of sticking with rolling four lines at 5v5 makes a lot of sense. That being said, the season is long, and eventually playoff races will heat up, and there will come a time when the Leafs need to be a bit more focused about how they deploy their players, and under Sheldon Keefe, the fourth line does still find around 10 minutes of icetime a night at 5v5.
When it comes to 5v5, the Leafs peak usage is with Auston Matthews playing 16:37 a night since the beginning of last season. Marner is the only other player averaging over 15 minutes, and regular fourth liners like Simmonds and Spezza are at the other end of the scale still playing around 9 minutes a night of 5v5. The Leafs big four forwards are the only players presently on the roster that average more than 13 minutes of 5v5 per night, and the remaining eight forwards live in that 9-13 minute range, clustering largely around 11 minutes. Not to put too fine a point on it, but many of these players are capable of playing more if needed.
Rolling four lines has often been regarded as the best case scenario for a team, and in a regular season environment, I wouldn’t say the Leafs are wrong to do it, nor have they suffered because of it. Where I begin to question the approach is when we look in the long term towards what could benefit the Leafs in the playoffs, and is it part of what has gone wrong for them in the past?
When it comes to the last couple of playoff appearances for the Leafs, both Columbus in the return to play, and last season against Montreal, we see a modest spike in the 5v5 of the top line players. Matthews goes up to 19 minutes 5v5, Marner to nearly 18 minutes, and both Tavares and Nylander see their times increase by about a minute as well.
Now you could look at those increases and say, there have been four overtime games during that period which would impact 5v5 ice time numbers, and you’d technically be right, but when you look at the frequent fourth liners, you can also see that their numbers have dropped by about a minute each as well. The Leafs to some extent may have cut back the usage of the fourth line, but still a ways from being a three line team.

There’s nothing wrong with the fourth line

One thing that probably needs to be made clear in this is that the Leafs do have a good fourth line, and in the event of a comfortable lead, playing the fourth line with regularity makes a lot of sense. The Leafs present fourth line is also one that has a lot to often in the regular season, and could be a good beginning of a fourth line in the playoffs as well. As much as the Leafs can get their fourth line to a state where it’s 3 players who have something to add situationally, and are capable of coming over the boards together on long whistles, that’s the goal. To some extent the Leafs have strong makings of that with Spezza being a capable powerplay specialist and additional center and Simmonds being a queued up ball of energy ready to hit anything not wearing a Leafs jersey. The fourth line just seems to require a penalty kill specialist, and that seems like something Toronto has in abundance between whichever of Semyonov, Engvall, or Mikheyev fit the bill as the de facto fourth liner. Finding the fourth liners are easy, the challenge is identifying if the Leafs have a true top nine that they regularly want to put out on the ice together.

Matthews-Marner
Tavares-Nylander
Kampf-Kase
So far, so good with these players making up the group that you regularly want to see have elevated usage for the Leafs in games that matter the most.
Factor in that Alexander Kerfoot is certainly a capable top nine player with usage on any one of those three lines, and Michael Bunting’s value seems pretty clear as well, and we find ourselves in the situation where the real story is about how to make that final spot in the Leafs top nine justify this usage plan.
Right now the competition between Nick Ritchie, Pierre Engvall, and soon Ilya Mikheyev seems to warrant a wait and see attitude about who will establish themselves as the clear fit with this group. There is also reason to hope that one of Josh Ho-Sang, Alex Steeves, Nick Robertson, or Joey Anderson might also bring themselves into the mix as the season progresses, but while the Leafs have plenty of could be capable top nine players, the lack of a clear cut favourite pokes holes in the idea that a short bench is part of the Leafs salvation.
Where it gets interesting is when you start doing the salary cap math of the questionable forwards. With Engvall at $1.25M, Mikheyev at $1.65M, and Nick Ritchie at $2.5M, there might be some interest in trying to relocate the salaries of three players who have been inconsistent at filling a top nine role in favour of one $4.5M player who seems like a good bet to be successful in that capacity. Certainly an idea that falls into an easier said than done, but one that addresses the Leafs needs while still maintaining some form of usable depth with Semyonov, Robertson, Ho-Sang, Steeves, and Clifford.

Going with the short bench bucks the current trends

Looking at the Tampa Bay Lightning, and other recent teams with playoff success, the trend seems to be in support of rolling four lines, and in a copycat league, that has certainly become the standard. And honestly, for the Lightning, who were utilizing Tyler Johnson as a fourth line forward, the idea of rolling four lines wasn’t a bad one. Putting Tyler Johnson on the ice for 9 minutes a night at 5v5 seems low, when you consider the player, but when you consider the makeup of the roster and the overall team depth, the Lightning philosophy makes a lot of sense.
In fact it makes sense to some degree around the league. Arguably, even post expansion we are seeing some of the deepest rosters to ever exist at the NHL level, with the exception of whatever the hell the Coyotes are doing. It’s not a challenge to have capable fourth lines, especially with the “you must dress a goon” stigma a thing of the past.
The reality is that Spezza-Simmonds and mystery player certainly provides the Leafs with a line that they can be used in a rolling four scenario, but when the situation calls for leaning into the top three lines, there are still useable assets for versatile situations.
The Leafs find themselves in a situation where they are essentially auditioning a number of their current forwards for the last top nine forward position, and a quarter of the way through the year no one has grabbed it. That leaves the Leafs in a situation where it’s either relying on Ilya Mikheyev being the best option in that, a Marlie stepping up, and there will be a need to address that role through trade.
Rolling four lines seems like the route that makes the most sense through the regular season, and heck it couldn’t hurt as a starting point in the playoffs as well, but that notion that the Leafs benefit from a clear cut strong top nine and reliance on a fourth line of players with diverse talents remains in their best interest as well and could serve them well when consistently winning becomes more critical.
Uncategorized
Recent articles from Jon Steitzer