Rumours: The Leafs interest in Bear, keeping an eye on the Canucks, and more 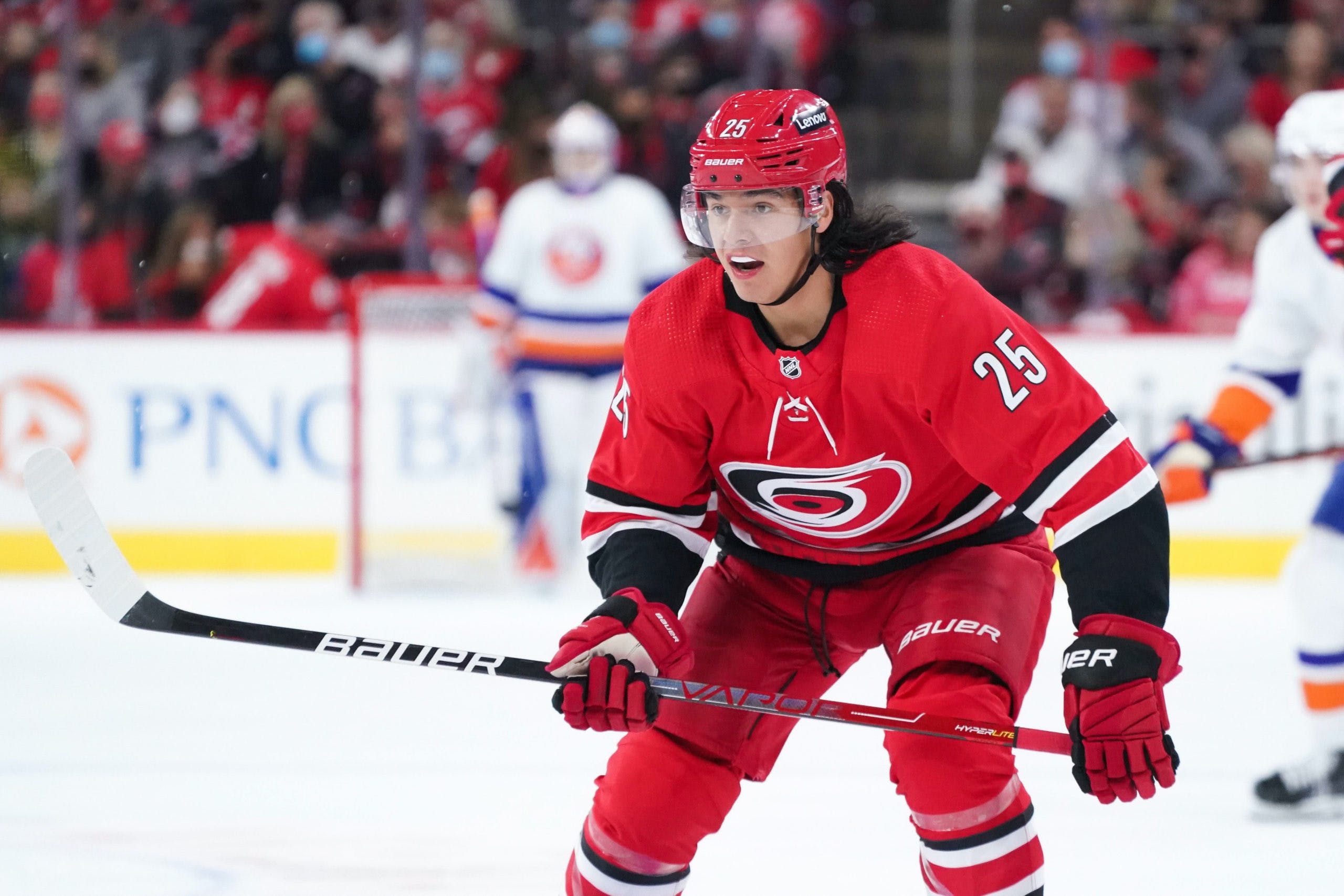 By Jon Steitzer
3 months ago
The Leafs have been just average enough that it’s time to dust off the weekly rumours column and rosterbate until our very souls are chafed. Yesterday we got the ball rolling with the somewhat (read: very) impractical idea of trading for Jakob Chychrun, and today we’ll shift gears towards a far more practical option.

Ethan Bear to the Leafs?

Elliotte Friedman and Jeff Marek opined on the Carolina Hurricanes defenseman who has been sitting so far this season. He wants to play, there has been a trade request, and Carolina is actively trying to move him and of course, whenever there is a right shot defenseman the Leafs are bound to be one of the teams that are speculated on.
Bear is a personal favourite of mine. Living in Edmonton, I had a chance to watch him a lot and think he’s been underutilized by the Canes because they are simply too deep on their blueline. If he had stayed in Edmonton, he’d probably be playing in the top four and that means he averages out to being a pretty darn good right shot option on the third pairing.
Friedman makes it clear that the Hurricanes aren’t interested in a lousy return or retaining salary in order to make a Bear trade happen and in fact that waivers might even be more appealing than an AHL grab bag.
The Leafs could essentially make a real offer for Bear now that it seems that LTIR will be a running theme for Murray and Muzzin, and while a contract would have to be moved for Toronto to make things work, the Leafs do have useable forward depth that might be desirable to the Canes.
Bear is primarily an offensive driven defenseman, but has some bite to his game. In his best year in Edmonton, when he was playing nearly 22 minutes a night he showed signs of being more of a complete player. The Canes have moved him in a specialist direction, but the Leafs could easily take the 25 year old and nudge him back towards being an all situation minute eater.
At $2.2M, Bear would be an affordable option, but not necessarily one that firmly establishes himself ahead of Justin Holl and Timothy Liljegren on the right side. If the Leafs goal is to upgrade in their top four, Bear isn’t that guy yet, just a good option to test to see if he can be fit.
While connecting the dots between Bear and Toronto is interesting, the Leafs might not be the best fit for either side, and the Canucks still seem like the best potential landing spot.

Vultures are circling the Canucks

Speaking of the Canucks it seems like everyone and their dog are calling for the Canucks to blow up the team completely, and here is a bit of an excerpt from TSN’s Insider Trading to that extent:

The Vancouver Canucks still believe that it is too early to do anything significant or anything that is overly drastic. But the Canucks also know, guys, that they are dangerously close to having to put everything on the table. So what does that mean, and what does that look like? Well, let’s start with a hefty renovation. That means moving out players, maybe key players, collecting draft picks, knowing that there is a very good draft looming in 2023.

When it comes to cherry picking what Darren Dreger said about the Canucks this should be the most interesting from a Leafs perspective. There are half measures like firing Bruce Boudreau (which might also be of interest to Toronto) or pulling off a minor trade to send a message, but a hefty overhaul with everything on the table is where the Leafs should be interested.
The everything on the table angle opens up three interesting options:
The first is pending unrestricted free agent Bo Horvat. Horvat would be huge for the Leafs center depth which is somewhat lacking as he could provide top six relief for Tavares and Matthews as well as being a top tier third line center this season. The price wouldn’t be cheap, but his $5.5M cap hit might be doable if Muzzin is truly out for the long term.
Conor Garland is much more of a nice luxury, but one on a reasonable contract. He’d add some feistiness to the lineup and allow the Leafs to push some offense down into their bottom six forward group.
Finally the player the Canucks should be most reluctant to move, but the one the Leafs should be prepared to pay an ungodly price for, Thatcher Demko. Demko’s slow start to the season has been part of the Canucks problem, but it’s unlikely that the 26 year old on a $5M/yr contract for the next four seasons is cooked.
Nothing major seems imminent with the Canucks, but they are certainly a team to watch in the coming weeks and months. (I think last year when I said this they turned themselves around under Boudreau.)

As long as the Leafs sit at 50 players contracts I’ll have the same anxiety I get when my iPhone battery bar switches to red. The Leafs are in a bad spot and it seems to be largely based on the assumption that someone should have been claimed off waivers in training camp, but it never happened. Now the Leafs have a pressing need for backup to Ilya Samsonov, could use someone to supplement the long term loss of Jake Muzzin as well, and a perfectly good forward with size was placed on waivers yesterday (Kieffer Bellows) that could have been an interesting fit for the third line.
Beyond Wayne Simmonds (pre-waivers) the Leafs haven’t really put any names out there, but I wonder if the Nic Aube-Kubel experiment has been going as well as they’d like, or if Pierre Engvall is too frustrating for Keefe, and if they will become players that are tempting to move. If Muzzin is truly done, I wonder if his contract will be on the move as its cap hit would be of value to a potential seller who wants to stay above the cap floor. Also, the returns of players like Mikhail Abramov to the Marlies would open up some warm-body moves like Pavel Gogolev or Mac Hollowell being included as throw-ins for the Leafs to pick up some additional SPCs.
The SPC thing seems like it bothers me more than it bothers Kyle Dubas, so it’s probably not going to be resolved on my time.
Editorials
Recent articles from Jon Steitzer