Seattle beats the KRAK out of Toronto: Muzzy’s Muzings 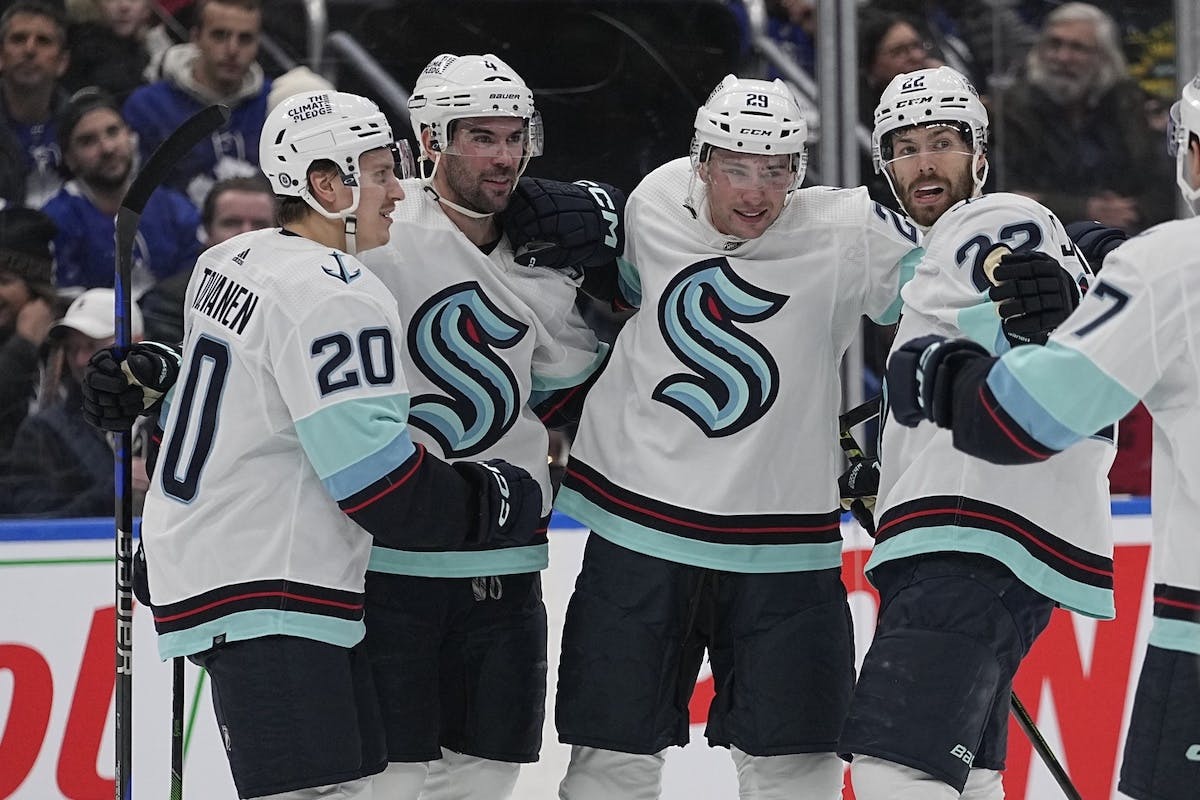 By Nick Alberga
26 days ago
Another stinker.
For the first time since November 11th against Pittsburgh, the Leafs (23-9-7) dropped a home game in regulation on Thursday night.
But whatever, Canada won Gold at the World Junior.
Vince Dunn tallied a goal and two helpers as Seattle (21-12-4) ran away with a 5-1 victory to snap Toronto’s 11 game point streak on home ice.
Former Leaf (for a cup of tea) Jared McCann had one and one while Martin Jones made 26 stops to improve to 17-5-3. Speaking of which, it was another tough outing for Matt Murray as he surrendered five goals on 26 shots. That’s now 11 in the past three appearances. Also, let’s settle a bit on the Bronx cheers. It’s a long season.
John Tavares scored the lone goal for Toronto, his 16th of the season. Also, Mitch Marner picked up an assist for career point No. 499. He’s now one away from becoming the second fastest player in franchise history to 500 points.
Granted it was just the third meeting between the two squads, that was Seattle’s first ever victory against Toronto.
MUZZY’S MUZINGS:
PARK IT
Let’s call a spade a spade, it’s been an ugly start to 2023 for the Maple Leafs. In two outings, they’ve surrendered 10 total goals. After a solid first, the game went downhill in a hurry in the second period as the Kraken opened up a 4-1 lead. From there, it was a formality. Firstly, I think Seattle deserves a lot of credit for their in-game adjustments. They were really good after the Leafs dominated the first. For Toronto, it’s been a mixture of a lot of things recently. Yes, the goaltending hasn’t been great, but defensively speaking, they’re just out of sorts a tad. They’ll figure it out.
GOOD START
All things being equal, I thought the Leafs were fantastic in the first period. They limited Seattle to just three shots on goal, which was a vast improvement defensively from previous outings. Unfortunately, the second period was a bit of a different story. Having said that, I decided to look at some positive notes from this dreadful loss. They’ve had bad starts lately, and weirdly enough, that was not the story in this one. They came ready to play.
SOMEONE MAKE A SAVE
I won’t lie, I’m getting a bit cranky when it comes to the goaltending. Simply put, both Matt Murray and Ilya Samsonov have not been good enough lately. Luckily, more times than not, the Leafs have been able to outscore their issues, though —not on Thursday night, however. Having said all that, it’s a long season. I will continue to give them the benefit of the doubt until further notice. There’s no need to panic, folks. It’s a long season. All I’m strictly saying is that they need to be better —that’s it, that’s all. For what it’s worth, the Leafs have now surrendered four goals or more in four the past five contests.
HIGHLIGHT OF THE NIGHT:
WHAT’S NEXT?
0-1-1 through two outings, the Leafs will finish off their brief three game homestand on Saturday night against the Detroit Red Wings. In fact, Toronto and Detroit will play twice in five days to finish off their three game season series. Back on November 28th in Detroit, the Leafs took the opener 4-2.
PSA: Don’t forget to check out ‘Leafs Morning Take’ with yours truly, Nick Alberga, and former Leaf Jay Rosehill every weekday morning LIVE at 11 a.m. ET on The Nation Network YouTube page.
Editorials
News
Recent articles from Nick Alberga