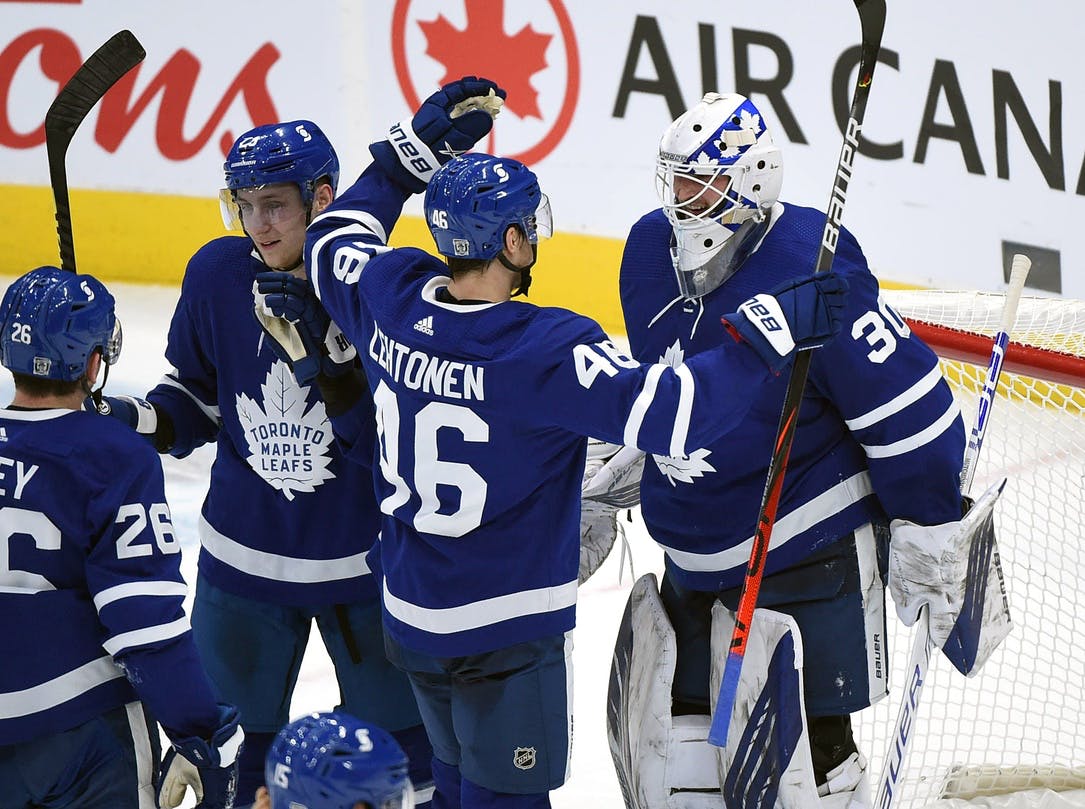 By Scott Maxwell
1 year ago
After a blown lead on Monday and a game that was closer than it needed to be last night, the Leafs finally had the kind of game we expected against the Sens, as all of the big guns would show up in a 7-3 blowout. There were a lot of goals to cover, so let’s get right into it.
It was a high scoring first period as the Leafs made sure to get a quick lead to support Hutchinson’s season debut. They got a couple powerplays to start the game, and capitalized on the second one with another Auston Matthews goal, who gets his 15th of the season, and extends his point streak to 15 games as well.
The Sens ran into a bit of goalie trouble after that, as Marcus Hogberg got hurt and Matt Murray, who played last night. Don’t worry, there was no David Ayres in this game to give the Leafs any trouble.
The Matthews goal was the only goal for most of the first, but the floodgates opened up late. First, the Leafs made it 2-0 as Joe Thornton deflects a Jake Muzzin a slap past from the point past Murray.
Then, Michael Hutchinson reminded us that he was Michael Hutchinson and allowed… this.
And with just a bit over 20 seconds left, Matthews gets another goal as Marner fooled Murray with a pass behind the net, and left Matthews with a wide open net to stuff the puck in.
The Leafs would carry that momentum early in the second period, as just a few minutes in, Ilya Mikheyev’s wrist shot from the point would find a way past Murray to make it 4-1.
And shortly after, Marner would make a nice move around Mike Reilly and wire it top shelf to give the Leafs a dreaded 5-1 lead against the Sens.
The former Leaf Connor Brown would cause panic in Leafs Nation as he scored to make it 5-2 Sens with plenty of time left still…
But, William Nylander, our saving grace, would release any of that tension by burying a rebound and making it 6-2, and also ending a somewhat lengthy drought (and potentially silencing the critics for now).
The third period was about what you would expect for a blowout, but there were still a couple more goals. It started with a Drake Batherson… pass?… that deflected off of Mikko Lehtonen and into the net.
And to wrap it up, John Tavares joined his linemate in ending a lengthy drought and got a goal himself to make it 7-3, and that would be the score that holds.

He had two goals to extend his league lead in goals by four, and four points to move him up to fourth in scoring. His name keeps getting tossed around for Hart consideration, and he’s shown us exactly why he should be considered again tonight.

I couldn’t really decide between the two, but they both had pretty rough nights, although not entirely their fault. Lehtonen has been scratched for the last four games, and Dermott was playing on the right side for the first time all season. It’d be nice if they got a bit more time to play together to get more adjusted to both of their styles, but the Leafs have had a solid enough blueline that it’s hard to experiment there.

Remember when it seemed like we had depth scoring problems.

It’s another Hockey Night in Canada showdown as the Leafs face the Habs for the fourth time this season. Puck drop is at 7pm on Saturday, and the game can be found on Sportsnet.
Uncategorized
Recent articles from Scott Maxwell