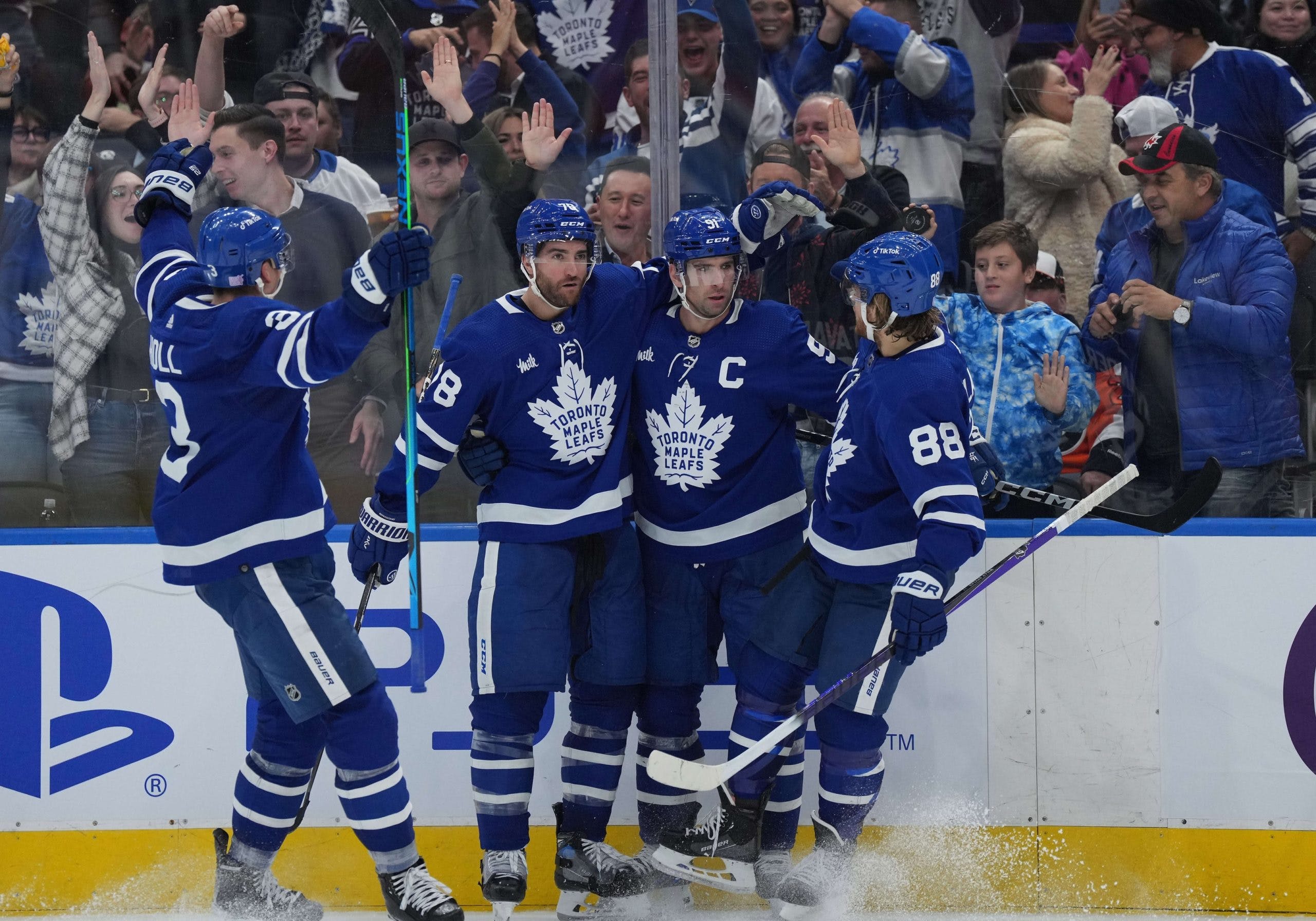 By Nick Alberga
2 months ago
It was 3-1. Again. But this time, the Leafs persevered.
And what a night for the captain, what a start to November.
John Tavares netted his 11th career hat trick and added an assist as Toronto snapped a four-game winless skid with a 5-2 victory over the Philadelphia Flyers (5-3-2). The Leafs improved to 5-4-2 on the season.
After a dismal five-game road trip (1-2-2), this was just what the doctor ordered for Toronto, who were back on home ice for the first time since October 20th. Don’t look now, but Auston Matthews now has three goals in his past four outings. The reigning Hart Trophy winner had one goal and one assist on the night. Meantime, Mitch Marner tallied two helpers, so did Morgan Rielly.
Ilya Samsonov made 23 stops to improve 5-2-0 on the season.
MUZZY’S MUZINGS:
JOHNNY TORONTO
By far, he was Toronto’s most consistent skater in October, and that continued to start November. John Tavares was fantastic tonight and deserved every bit of that four-point night (3 G, 1 A). In 11 games this season, the captain now has seven goals and 14 points. Considering what he’s been through the past few years, you love to see it.
BIG BOYS CAME TO PLAY
In general, Toronto’s big boys led the way all night. They played with pace, passion and urgency.
Something tells me Toronto’s offence is ready to erupt, it could be time to start hammering those overs.
BOTTOM SIX FIX
Kudos to Sheldon Keefe, his changes to the bottom-six got them going a bit. To that point, it’s amazing how different this team looks when they’re getting contributions from their depth players. More specifically, I thought Denis Malgin and Zach Aston-Reese looked really engaged tonight. Let’s see if they can string a few outings like that together.
CLEAN EXITS
For the first time in a while, all in all, I thought the zone exits tonight were much cleaner. When the link between the defence and forwards is crisp and tight, it allows Toronto to play with so much more pace and speed. And naturally, that should create more time and space for the big boys to do their thing. One look at the box score would say mission accomplished. Great development.
DISCIPLINE ISSUES
If there was one negative to pull from the night, it was the parade to the penalty box. Unfortunately, the theme of taking ill-advised penalties carried over to November as Toronto took SIX minors tonight. For me, it’s the o-zone ones that really grind my gears. More times than not, there’s no need for them. Put it this way, how’s a team going to score a goal from their own end? Unless Vesa Toskala is your goalie, of course.
When you’re struggling the way Toronto has been, getting into penalty trouble will only amplify the stress level for all parties involved. In that respect, the Leafs got lucky tonight, they need to clean things up. Also, full credit to the PK. They were excellent.
HIGHLIGHT OF THE NIGHT:
WHAT’S NEXT?
The Leafs will be back in action on Saturday night when they host the red-hot Bruins (9-1-0). Toronto took all three meetings with Boston last season.
PSA: Don’t forget to check out ‘Leafs Morning Take’ with yours truly, Nick Alberga, and Jay Rosehill every Monday to Friday morning LIVE at 11 a.m. ET on The Nation Network YouTube page.
Editorials
News
Recent articles from Nick Alberga