Ranking the Leafs prospects prior to the draft 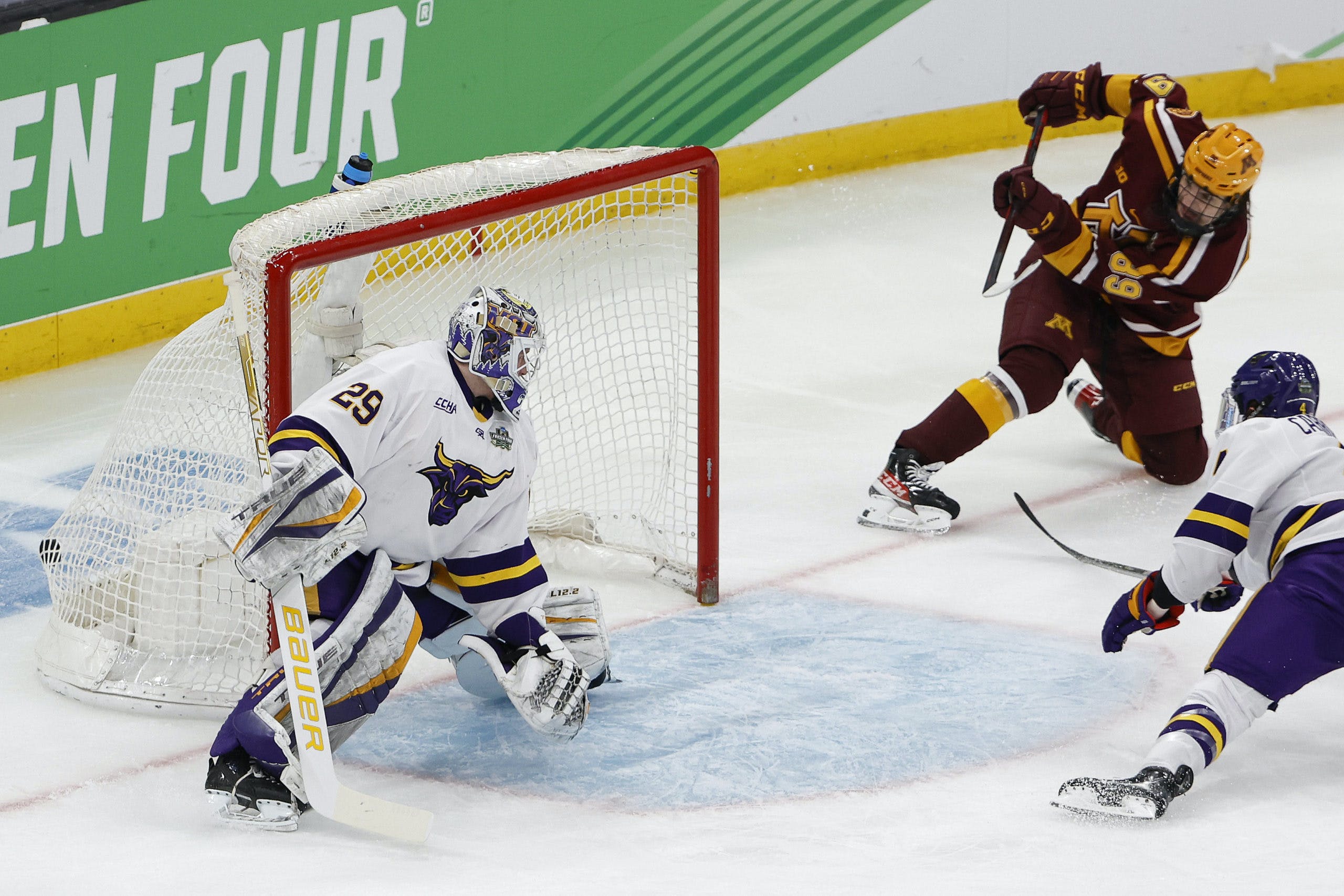 By Jon Steitzer
7 months ago
One of my favourite things about June is cramming for the NHL Entry Draft like it’s a college final, and I’ve spent the majority of the semester hungover. Whether it will be more or less than the three prospects the Leafs are slated to draft over July 7th and 8th that enter their system, it seemed only fitting that we take a look at who is in the Leafs system right now so we can better get a sense of what are the areas of need (I know, I know, take the best player available, but it’s really not that simple.)
I’ve enlisted the help of TLN’s prospect experts Kyle Cushman and Nick Richard, along with our Marlies reporter, Nick Barden, to help me assess who the top ten prospects are in the system. For the purposes of TLN Prospect Rankings, we generally stick to the rule of presently being under the age of 24 and having less than half of a full season of games to their credit (read: 40 games or less). This means Rasmus Sandin, Timothy Liljegren, Joey Anderson, and Kristians Rubins are not prospects. They are all good young players, but they are not prospects. Calder eligible old timers like Bobby McMann are also exempt from this.
We’ve also decided that at this point including Rodion Amirov would at best be unfair and at worst be in poor taste. Nothing matters beyond his health right now, and I hope when we get around to ranking prospects in 2023 he’ll be a part of it.
Here are our rankings:
Here are our thoughts on the players we ranked.

Matthew Knies propelled himself to the top of the Leafs’ prospect pool with an outstanding freshman season at Minnesota, as well as with his appearances representing Team USA at the World Juniors and Olympics. His combination of high-end offensive skill and physicality make him a truly unique prospect with a relatively safe floor, and not just in Toronto’s system.
It may seem like a step back for Nick Robertson but he had a great season of his own after returning from a broken leg suffered in just the second game of the season, scoring at a 40 goal pace in the AHL in what would have been his first professional season under normal circumstances. It hasn’t translated to the NHL just yet but his performance – especially down the stretch – with the Marlies is a pretty good indicator that it will, and he should be given plenty of runway to carve out a spot with the Leafs next fall.
After bursting onto the scene at last year’s World Juniors, Topi Niemelä put up historic numbers for a U20 defensman in Liiga this past season. He was a consistent driver from the back end for Kärpät and took on more responsibility as the season wore on.
Hirvonen made the move to HIFK in Liiga this season and though he started slow, he had a solid season that was interrupted only by his appearance at the World Juniors where he captained the Finnish squad.
Pontus Holmberg is the biggest riser among this group after he had a career year in the SHL, following up a strong finish to the 2020-21 season where he earned SHL playoff MVP honors. He may be the most NHL ready player in the pipeline outside of Knies and Robertson, and though he lacks the offensive upside those two possess, his well-rounded game could see him playing fourth-line minutes in the NHL as early as this coming season.
Nick Abruzzese went through an adjustment period after turning pro late last season but it seemed like he was starting to figure it out with each passing game. His intelligence and skill as a playmaker are legitimate but he will have to improve his overall pace in his first full season of pro hockey next year.
Alex Steeves is another guy who could stand to add a step to his game but he had a really impressive first season of pro hockey, scoring 23 goals and 23 assists for the Marlies despite missing significant stretches due to injury.
Ryan Tverberg and Ty Voit are a couple of late-round picks who really elevated themselves this past season. Tverberg is a hardworking, energetic player with some goal-scoring upside and he should take on an even more prominent role at UConn next fall. Voit doesn’t represent the same level of NHL certainty that Tverberg does but he has great offensive vision and outperformed his fifth-round draft slot in a big way this past season for Sarnia in the OHL.
Joseph Woll rounds out my top-ten, based on the outside chance that he becomes a serviceable NHL netminder in some capacity. He dealt with injuries for much of the season but when he was healthy, his play looked like it had taken a step forward and a couple of solid performances at the NHL level showed that he still has the potential the organization saw when they selected him in the third round of the 2016 draft.

Matt Knies, Nick Robertson, and Topi Niemela are the unanimous top three for a reason. In a Leafs prospect pool that has a lot of intriguing players 15-20 names deep, that group of three stands above the rest as having legitimate top-six/top-four upside.
I debated how to rank Roni Hirvonen, Alex Steeves, Nick Abruzzese, and Pontus Holmberg a fair bit. Hirvonen’s age combined with the step he took in 2021-22 to drive results in Liiga puts him over the rest for me at the moment. He ranked top ten league-wide in Corsi-for and generated a significant amount of shots. Assuming he gets more ice-time and continues to drive play the way he did last year, I can see him breaking out offensively in 2022-23.
It’s easy to overlook as Steeves came in as a collegiate free agent and already has his first professional season under his belt, but he’s actually younger than Abruzzese by a few months. While I still believe Abruzzese has the higher upside, Steeves’ projectability to an NHL bottom-six just slightly edges him ahead in my rankings.
Holmberg rounds out this group coming off of a great season in Sweden. Comparing him to two other somewhat recent late-round draft picks out of Sweden for the Leafs, Holmberg doesn’t have the same scoring upside that Andreas Johnsson possessed and doesn’t have the same physical tools as Pierre Engvall. He’s also coming over to the AHL at a later stage in his development and will need to make an impact quickly with the Marlies to stay on his current trajectory.
Rounding out my top ten are current Marlies players Semyon Der-Arguchintsev, Mikhail Abramov, and Joseph Woll. This group ranks just ahead of the younger tier of Ryan Tverberg, Ty Voit, and Veeti Miettinen for me as they are closer to contributing in the NHL and have a sample of results at the AHL level.
SDA remains a fascinating prospect, bouncing back from a tough start to finish the year with pretty solid numbers all things considered. Abramov drops three places on my list after his disappointing rookie season with the Marlies. Even though Woll was limited to just 19 games combined in the NHL and AHL this year, he finally started to show a bit more consistency. He’s not ready for regular NHL minutes, he still needs to have a full season with the Marlies while posting good results, but he showed enough this year that I can see him becoming a backup at the NHL level in a couple of years to grab the last spot in my top ten.

Breaking down the Leafs prospects, I feel there are a few tiers here. The first three are the premium guys and interestingly enough they should all be entering the NHL full time in different seasons. Robertson’s time is now, Knies will get next season, and Niemela likely follows the year after that.
The next tier at 4-6 are at least ready now to be bubble players for the Leafs and will be competing with each other for a final roster spot. Whichever one can be a capable fourth-line center likely has the biggest advantage.
Roni Hirvonen is his own thing and it seems like the Leafs will be patient in developing someone they could view as their future 3C. I might have him a bit lower than then the other contributors here, but that is based on NHL readiness and without a top six upside it’s hard to move him ahead of that block.
Ty Voit and Ryan Tverberg and two young players to be excited about and Mikko Kokkonen isn’t exactly exciting, but instead, a steady safe blueliner who could be a great fit for an offensive defenseman (read: future D partner of Niemela.) The recency of Ty Voit’s invite to the USA Hockey World Junior evaluation camp probably had me jumping him a bit higher than he should be, but he also took big steps forward this season and looks to be a steal. Tverberg, well, anytime the Leafs are developing a physical forward my ears perk up and the fact that Tverberg was at least considered in the early stages of the Hobey Baker process wasn’t lost on me either. I was very dismissive of his selection when he was drafted and love to be proven wrong.
Considering the number of draft picks traded away in recent years the Leafs should be fairly happy with their depth of prospects, but with a number of these players ready to graduate, there will be a need to refill the prospect pool. The areas of need right now for the Leafs seem to be players that blend size and skill, as well as a focus on centers to address the lack of a blue-chip option at a hard to fill position.
What is interesting about the Leafs prospect pool is that good options like Veeti Miettinen, and Vyacheslav Peksa didn’t even factor into our top 10, nor did promising options like William Villeneuve or Dmitri Ovchinnikov who are still early-ish in their development and could climb our rankings fast. There’s also newcomer Max Ellis who we might be overlooking in the exact same fashion we all overlooked Alex Steeves last year. With the exception of Dave Poulin, the University of Notre Dame has been good to the Leafs and Ellis could emphasize that.
We’ll be back with a much more thorough look at the Leafs prospects in August after some new faces have been added to the mix.
More from TheLeafsNation.com