The latest on Boeser, Chychrun, and Karlsson and if there is a Leafs fit: Rumours 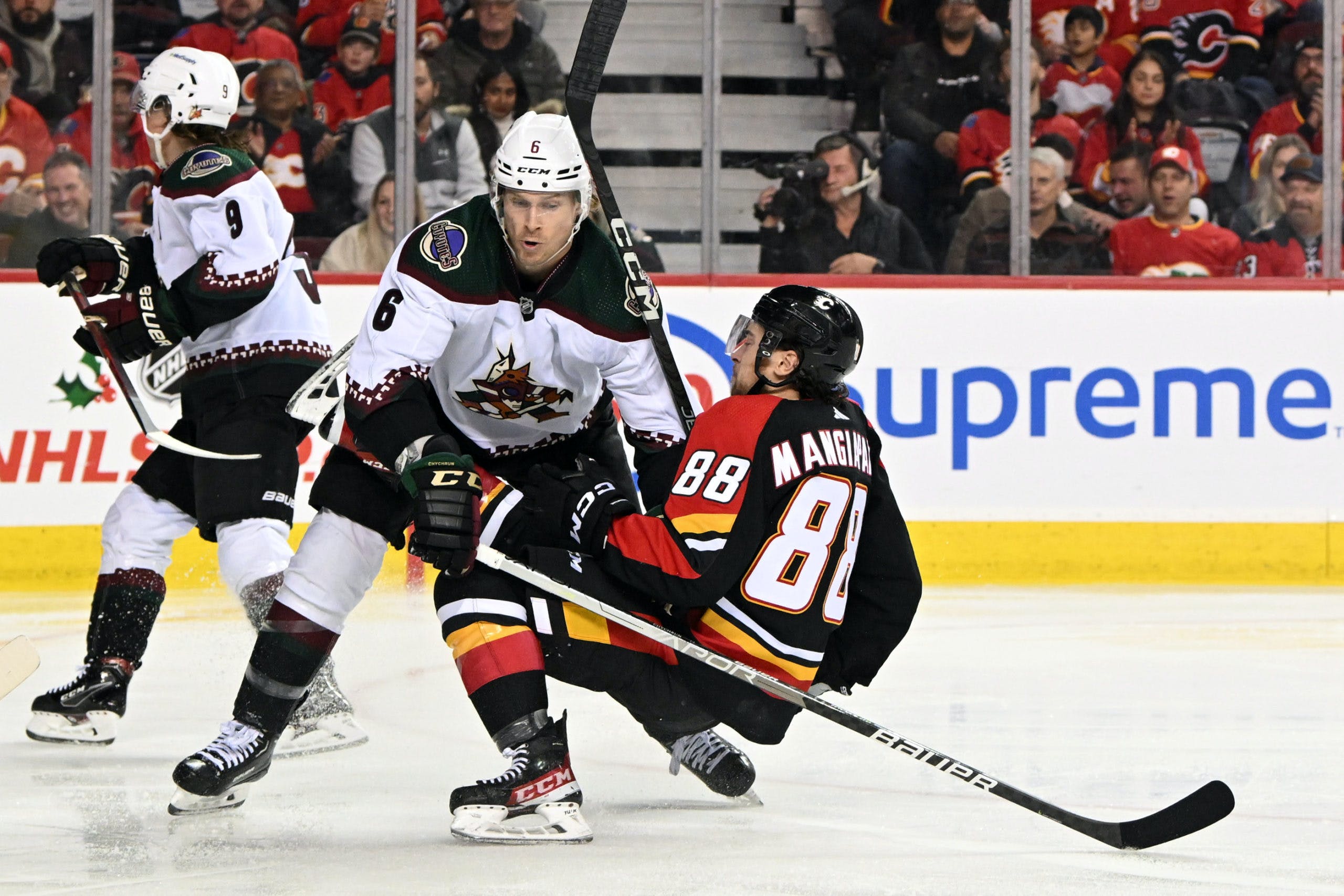 By Jon Steitzer
1 month ago
Another week, another rumours column. The Leafs aren’t particularly vocal about what they are doing, so let’s recap what is going on with some of the bigger names on the market…

Erik Karlsson for pennies on the dollar

Karlsson has been on absolute fire for the Sharks this year and if they are truly moving on from him (they probably should be if they are doing a full tear down) there are 31 teams that should have some level of interest. That said, $11.5M is a lot of money and next to impossible to fit into the lineup during a season. And even at 50% retained, $5.75M for 4 years after this one is a large commitment on a 32 year old when you are really looking to add because of an in season need. The full no movement clause definitely makes things more complicated too.
All that said, the suggested offer in the Seravalli clip above is a tad ludicrous. Karlsson @ 50% retained for Puljujarvi, and an NHL executive is saying the Oilers are the team that says no. So no one around the league is taking Karlsson for a middle six winger on a higher than they should have contract.
The idea that the Sharks get nothing back in exchange for no retention on Karlsson makes sense. The fact that Karlsson has such little value at 50% retained seems insane to me. I’m pretty sure most people can agree he exceeds a $5.75M value today and can likely deliver on that value for at least a couple more seasons as well. There’s also the fact that Karlsson can come in and add value for a team as a rental this year, and if they are willing to eat some salary or flip him in the offseason when teams have more cap flexibility they could very easily gain assets out of this deal as well. In short, nothing about this makes sense.
It’s for the reason that Karlsson is being horrible undervalued both in the short and long term that I’d hope the Leafs are exploring some options here. Karlsson burns through a lot of the Muzzin cap relief, if not all of it if the Leafs are jettisoning a contract (Pierre Engvall, hello) in the process, and offensive defensemen aren’t a primary need for the Leafs. That said, Karlsson does fit the Leafs defensive system well and Sandin gaining Karlsson as a defensive partner/mentor might be the best Christmas present a Swedish blueliner ever received.
I wouldn’t hold my breath on the Leafs coming through here, but some team is going to look very smart when they add Erik for pennies on the dollar.

Brock Boeser has been shopped to six teams by his agent

Pierre LeBrun reported on Insider Trading this week that Ben Hankinson has talked to six teams about adding Boeser to their lineup. This is interesting since it by no means is the Canucks talking to those teams and things have been far more quiet on that front other than the Canucks expressing some reluctance to retain salary unless they absolutely had to.
Boeser has very much been middling as a 20 goal scorer, potential 50 point guy over the past few seasons on a Canucks team that has been varying degrees of bad. It’s safe to say that most teams can find 20 goals for a lot less money than that, but Boeser is a 25 year old who has shown the flashes of brilliance that earned him that contract. It’s a big dollar amount to take on as a risk, as Boeser’s cap hit is $6.65M in two years beyond this one, but like Karlsson there has to be a lot of appeal in not having to give up high picks or top prospects in order to acquire a higher end talent. And like Karlsson, if a team were to eat a bit of salary on a deal over the summer, it seems possible to flip Boeser for a worthwhile asset.
While we don’t know the six teams that Boeser’s agent talked to, Cheryl Pounder of TSN speculated that the Flames, Oilers, and Bruins should all be interested in Boeser. The idea of Boeser ending up in Boston is one that certainly bums me out and while that shouldn’t be the only reason the Leafs express interest, it doesn’t hurt.
While Boeser has only 4 goals so far this season, his 16 points in 21 games puts him on pace for a career year when it comes to points. The Leafs can certainly use some secondary scoring, although they should primarily be looking at available centers, not more wingers to achieve that. Boeser would offset some of the offensive drop off from Bunting and Kerfoot, and take some of the pressure off the development of Nick Robertson, potentially allowing offensive talent to filter onto a third line for the Leafs. And like I said, spending limited assets to acquire him is also a perk and potential to flip him over the summer if needed is also advantageous.
Like with Karlsson, Boeser represents more of an interesting name to kick tires on rather than a primary trade target for the Leafs, and Kyle Dubas’ history shows that he prefers to go after his target with gusto rather than explore interesting names hitting the market.

Chychrun is back and he’s looking good

One of the cop out answers that people like me have been giving on Chychrun for a while is that no one should be interested in paying the Coyotes price until they know if Chychrun can still perform at a high level after his long hiatus. He’s looking pretty darn good to me and with that comes a lot of renewed interest in the player who arguably makes the most sense as a defensive target for the Leafs and pretty much every other team around the league.
From TSN:

“It seems like it’s picking up and there’s a couple of reasons to consider for that,” TSN Hockey Insider Darren Dreger said Tuesday. “Obviously we’re at a point in the regular season where the pressure on general managers and on owners have progressed.
“So, they’re feeling the heat, in other words.
“Then you have to push that aside and look at the game of Chychrun. Since he’s returned, he’s played seven games and has three goals and three assists. He’s a big man and he’s got a bomb for a shot.
“I still think there’s apprehension among clubs with the most interest to pay the price that Coyotes general manager Bill Armstrong is looking for, but I think there’s also a group of teams that are getting to a point that they realize they may have to.”
TSN Hockey Insider Pierre LeBrun reported last month that the price for the 24-year-old remains steep, with the Coyotes seeking first-round picks plus either a prospect or a young NHL player in return.

So yeah, Chychrun is good, and there’s a big asking price of two first round picks and a young roster player or top prospect. Let’s examine all of that from a Leafs perspective starting with the two first round picks.
This year’s first round pick is likely going to be used on acquiring someone at the trade deadline, so the question becomes is it better to be used on a rental option who will be one and done for the Leafs, or as part of a commitment to getting Jakob Chychrun for two more seasons after this one at $4.6M. I’d take the Chynchrun option all day every day.
The second first round pick is committing the Leafs to not being able to go rental shopping next trade deadline, but ultimately we know the Leafs draft picks end up being in the mid 20s. Let’s say the Leafs kept those first round picks, the odds of Toronto hitting the jackpot and drafting a top pairing defenseman with those picks is very unlikely, even with Toronto’s draft track record. Chychrun on a good contract is the better choice.
It’s with the top prospect or young roster player that complicates things a lot. At least for me, but there has to be some acknowledgement that to get Chychrun there will be someone it hurts to give up going the other way. If it is one of Liljegren or Sandin it feels like the Leafs are giving up a good cost controlled defenseman to get a great one. It’s an upgrade for sure, but it would hurt to see either of them go, but that’s probably not who Arizona is dialed into anyway.
If the Leafs were willing to part with Matthew Knies it feels like the deal would be done by now but Toronto very much not only sees Knies as part of their future, but sees him as an important late season addition this year. The fact that he’s doing well in Minnesota is only feeding into the desire for the Leafs to keep him, but for Arizona grabbing a player native to their state playing on a line with their recent star draft pick, Logan Cooley, would be the next best thing to landing Auston Matthews. It’s a hard one for Arizona to take off the table and I’m sure all the Nick Robertson and Topi Niemela offers in the world won’t change their mind.
Chychrun is a player I very much believe that Kyle Dubas is putting in some work on, but the asks of Arizona and the Leafs likely looking to also find ways of dumping some salary in the process has to complicate things to some degree. Given the Coyotes interest in getting something done and Dubas’ preference to make moves sooner rather than later this is something to keep an eye on and hopefully there will be more of a tangible connection rather than ongoing speculation linking these two teams.
I’ll close with a question for you to answer in the comments, if the Leafs had to give up 2 1sts as well as Matthew Knies to bring in Jakob Chychrun, would you do it? I think I’ve reluctantly come around to answering yes.
Editorials
Recent articles from Jon Steitzer