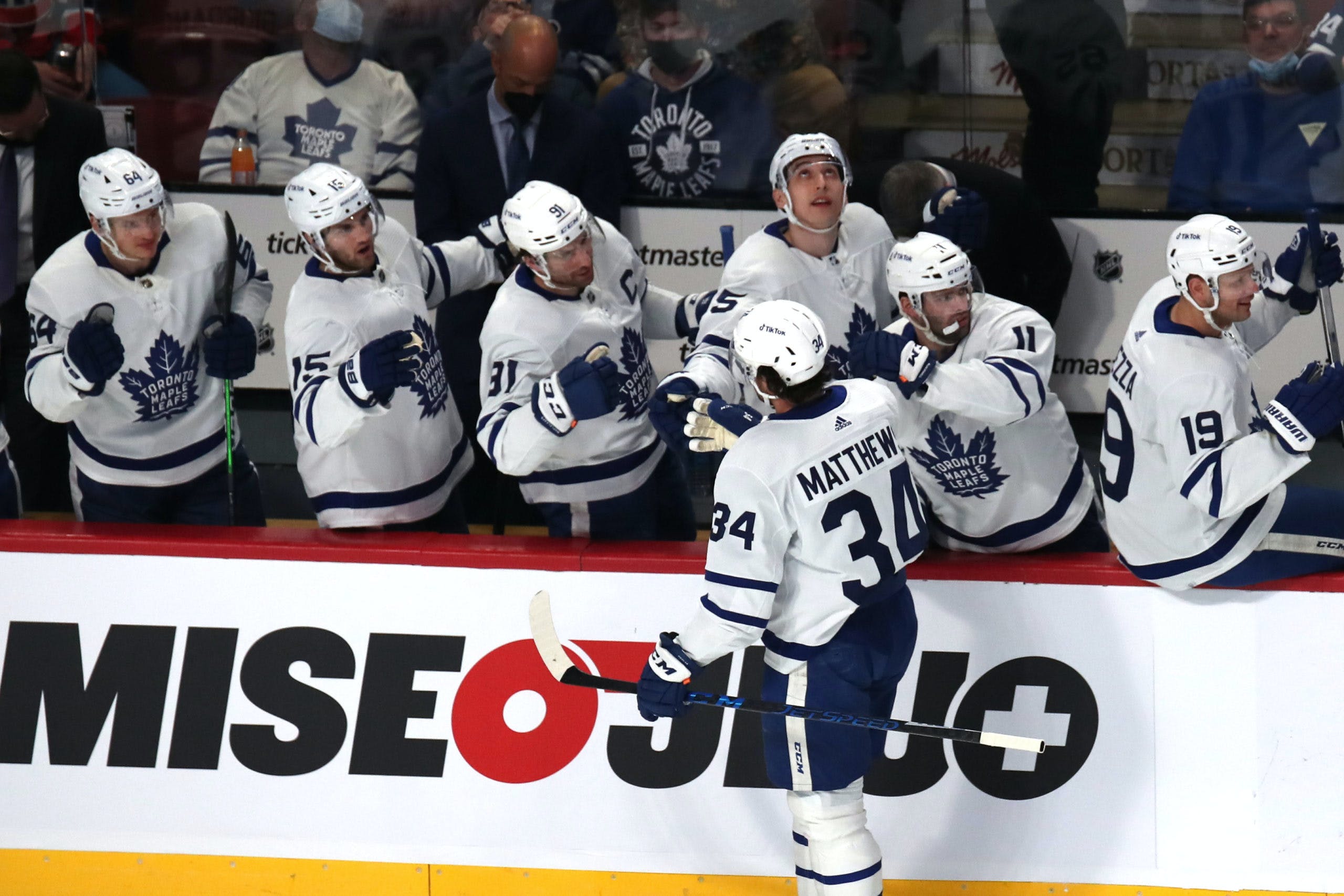 By Joseph Zita
8 months ago
Now that the NHL’s trade deadline has finally come and gone, this is the team the Toronto Maple Leafs will be rolling with for the remainder of the regular season and into the playoffs. After what was a pretty eventful week two weeks ago with Toronto playing four games – including the Heritage Classic – the Maple Leafs only had two games on their schedule this past week. One against the New Jersey Devils, and the other one against the Montreal Canadiens.
They opened their week last Wednesday night at home hosting the Devils in the ‘Next Gen’ game where the Maple Leafs were debuting their new jerseys that featured an all-black look with a little blue as well. The ‘Next Gen’ game was originally supposed to be played against the St. Louis Blues back in December, but due to COVID-19, it was postponed and moved to a later date.
Not only were the Maple Leafs debuting new jerseys, but they also had two newly acquired players – Mark Giordano and Colin Blackwell – debuting for Toronto as well. Toronto came out of the gates flying and played another solid game as they picked up a very important win over the Devils 3-2, which put them in second place in the Atlantic division at the time. Petr Mrazek got the nod for this game and he actually played a very good game despite allowing two very weird goals.
After securing the two points against the Devils, the Maple Leafs were on the road to play the Montreal Canadiens Saturday night for the third time this season. However, it didn’t go quite as planned for Toronto, yet again against this Montreal team as they were on the receiving end of another brutal outcome from this game, despite heavily outplaying the last place Canadiens. Toronto came out in the first flying and grabbed the 1-0 lead early, and continued that for pretty much the entire game but a couple of unlucky plays cost them as they ended up losing a very important game for playoff position 4-2.

I decided to throw Petr Mrazek in here and give him the third star of the week from last week because of the bounce-back game he had on Wednesday night against the New Jersey Devils. After what was a pretty miserable game in the Heritage Classic for him and pretty much through 95% of the games he’s played in, it was very refreshing to see Mrazek have the game he had against the Devils.
Yes, I know he allowed two goals on 22 shots, but those two goals, you really can’t blame him too much given how they happened. The first Devils goal was on the power-play and yes, the Leafs left Severson all alone on the right side to Mrazek, but the initial shot wasn’t going towards the net. It ended up deflecting off of Lyubushkin as he was going down to block it but it eventually hit off of him and beat Mrazek. It was a tough goal nonetheless, but not one you can really hang on Mrazek for.
And for the second Devils goal, it was just a scramble in front of the net that eventually beat him. He was in position when the pass was made to the left of him but it was Justin Holl who blocked the initial shot. However, with Mrazek sliding over to the left and Holl blocking the shot, the puck bounced back into the crease and all the Devils had to do was poke it home and that’s what they did.
Other than those two unfortunate goals, Mrazek looked pretty calm, cool, and collected and made some pretty big saves for the Maple Leafs throughout the game. I know it was only 20 saves, but for someone like Mrazek to make 20 saves and just allow those two goals in a time where he was guaranteed to allow at least three or four, it was a pretty big night for him, in my opinion.

This man right here just continues his Hart Trophy type season as he had himself another point a game week last week against the New Jersey Devils, and the Montreal Canadiens. Coming into this week, Matthews was just one goal off tying his career-high in goals (47) and just one point of tying his career-high in points as well (80). Well, as we all probably know by now, Matthews was able to tie his career-high in points with an assist against the Devils and tie his career-high in goals against the Canadiens, and with his goal Saturday night, he ended up setting a new career-high in points with 81, so it was nice to see him do that.
As I mentioned above, Matthews got himself an assist Wednesday night against New Jersey, and with that, he tied his career-high in points while continuing his dominant season as he’s been by far the Maple Leafs’ MVP this season and arguably the league’s MVP this season too. It’s not just all about the offensive abilities that a player that Auston Matthews has, but it’s also about the defensive awareness, the ability to play in all three zones, the ability to win face-offs, and the ability to completely take over a game for your team and lead them to victory. That’s what Matthews has been doing this season for Toronto and that’s why he’s looked at as without a doubt a top-three player in the league to many and even arguably the best player in the world to some.
On top of his assist Wednesday night, Matthews – and the Leafs – came out flying Saturday night in Montreal as he scored his 47th goal of the season just 36 seconds into the game – which tied his career-high in goals – and set a new career-high in points with 81 in just 59 games, which is just flat out remarkable to me. He has continued, along with his linemates, to produce at an elite level this season and they are currently looked at as arguably the best line in hockey, along with the Flames’ top line.
Although it was a tough outcome Saturday night in Montreal for Matthews and the Maple Leafs, it was great to see him set a career-high in points and inch closer and closer to 50 goals on the year. The upcoming week of games is going to be very, very important to this team as they have Florida, Boston, Winnipeg, and Philadelphia on the schedule this week. Two at home and two on the road.

I honestly feel like a broken record every week when I have Mitch Marner as one of the three stars of the week. This past week, he yet again earns himself the first star of the week as he had another brilliant week of hockey games, both offensively, and defensively. Last week in the two games on the schedule, Marner potted home his 27th goal of the season against the Devils which set a new career-high in goals, as well as two assists Saturday night in Montreal to improve his season point totals to 71 points – 27 goals and 44 assists – in just 55 games, which would be a 106 point pace in an 82-game schedule.
We all know by now that Marner has been one of the best players in the league with his production since January 15th, which was his return to the lineup in St. Louis after being injured and placed on the COVID-19 protocol list. He has been a completely different player on both ends of the puck ever since then and completely makes people forget the type of season he was having to start the year, which was very, very poor as we all remember.
Last week in just two games, Marner continued his marvelous season and has been one of the Leafs’ most important players in the lineup along with Auston Matthews as both players have been having exceptional seasons thus far. It’s honestly really great to see Marner being rewarded with these goals because of the mentality he has had this season which is to shoot more and try to get into better scoring positions on the ice.
We all know Marner as a pass-first winger, but he’s also a winger that has a pretty good shot and can be really dangerous when he uses it to his advantage. With him setting his career-high in goals with 27, I wouldn’t be surprised if we see him get close to 35 as the season comes to an end soon and continue that into next season and beyond.
Uncategorized
Recent articles from Joseph Zita