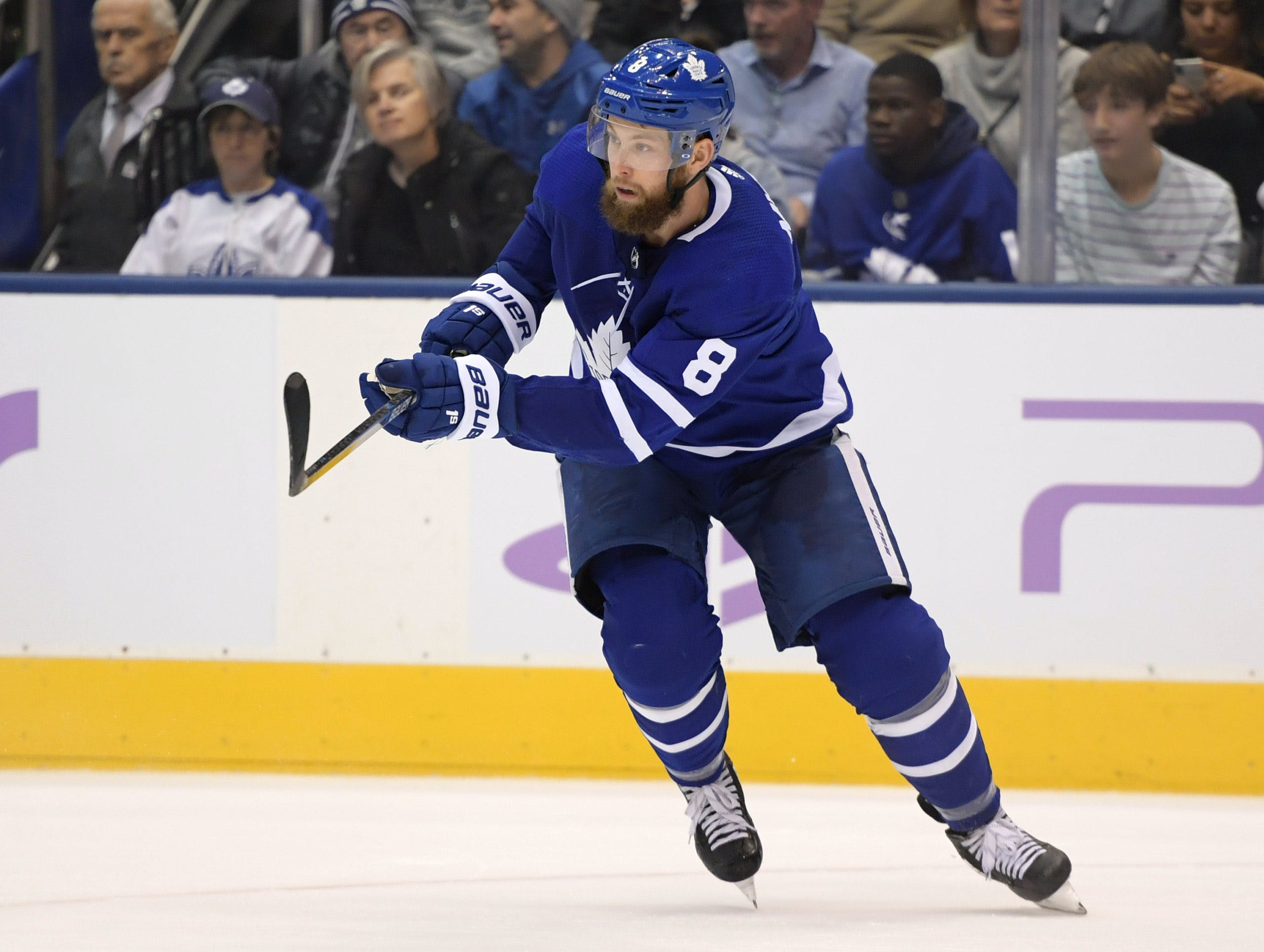 By Jon Steitzer
8 months ago
Yesterday Sheldon Keefe provided a bit of a non-update on Jake Muzzin, which certainly fits with the uncertainty of the Leafs surrounding the trade deadline. Will Muzzin be returning? Will he be returning in a month? After the playoffs? Will the Leafs have his LTIR salary cap space to work with? No answers are forthcoming and it seems likely that there will be a lack of clarity right up until the trade deadline.
From Keefe:

“I don’t think the nature of his injury is something you can put a timeline on. It’s just really how he feels. The fact that he continues to skate and workout everyday, we’re really encouraged by. But in terms of time, that will be up to him and the medical team.”

So that’s not exactly concrete and if you take the Leafs at Dubas’ word, the Leafs will be functioning off the $2M of cap space they can muster through demotions to the Marlies rather than tapping into the $5.6M of relief the Leafs would receive through keeping Muzzin on the LTIR. When you look at the Leafs’ needs, and the growing pressure to make a goaltender part of those needs there is understandably some frustration about taking the honest approach of bringing Muzzin back when he’s ready.
Related: The Jake Muzzin Situation
So the LTIR approach with Muzzin would certainly be the easiest to understand approach for how the Leafs would maneuver any excess spending between the trade deadline and the end of the season. That ignores that the Leafs can still take advantage of his contract giving them an expanded roster until he’s ready to return. With Robertson, Sandin, and Liljegren being the waivers exempt players and Kyle Clifford, Toronto can keep them up until Muzzin is ready to play. Having them sit or play with the Marlies until the playoffs is an option as well. The idea of Sandin and Liljegren spending time on the Marlies doesn’t seem fair to those players, but given the fact that shorter-term injury situations could keep them with the Leafs or return them to the Leafs quickly, it doesn’t seem like a big deal to operate in that fashion. That doesn’t free up any additional salary cap space, but it does speak to the Leafs having the $2M to spend that they’ve stated.
Beyond that, there is certainly the money-out option. The most obvious name when it comes to money out at the moment seems to be Travis Dermott. Sending Dermott out at the same time the Leafs have $2M initially to work with, already puts the Leafs in a situation where they can be considering a lot of options is salary retention is part of the discussion. If the Leafs are looking at other possible departures like Holl or Kerfoot that flexibility increases even further.
There’s also the possibility that someone like Ilya Mikheyev could be moved as a rental. Mikheyev has been a solid penalty killer and his speed is definitely helpful in playing an uptempo game, but after his 7 points (6 goals) in his first 8 games back from injury, his 8 points (2 goals) in his last 20 are far more telling of his abilities. That’s not to say judging a player like Mikheyev based on his offense tells much of the story, but his $1.65M expiring UFA contract that could also net a return does free the Leafs up to explore other options as well.
There is also the matter of if the Leafs plan on bringing in a goaltender, they’d likely want to remove one as carrying three goaltenders even with Muzzin on the LTIR seems a bit frivolous. Whether it’s selling Jack Campbell as a rental asset or paying a team like Seattle to make Mrazek’s contract disappear. Making Mrazek’s contract disappear might prove to be an expensive move if his performance doesn’t improve in the next 10 days, but certainly adds to the flexibility of what the Leafs can do.
So while Muzzin remaining on the LTIR seems like the easiest path forward for the Leafs, Toronto was dealing with the realities of a tight cap situation at the trade deadline long before the Muzzin LTIR situation made blockbuster moves seem more attainable. The notion of having Muzzin play, even a couple of games before the playoffs aren’t without its advantages either. With all signs pointing to Toronto prioritizing a defensive move, having Muzzin potentially working with a new partner before round one makes sense. And if it’s still either Muzzin-Liljegren or Muzzin-Holl, there’s a definite need to see if those situations are improved by a healthier Muzzin as well.
With 10 days to go until the trade deadline, there is still plenty of time for the Leafs to get the best information on how to proceed and in the process hopefully the best decisions are also being made for Muzzin’s long-term health.
More from The Leafs Nation
Uncategorized
Recent articles from Jon Steitzer