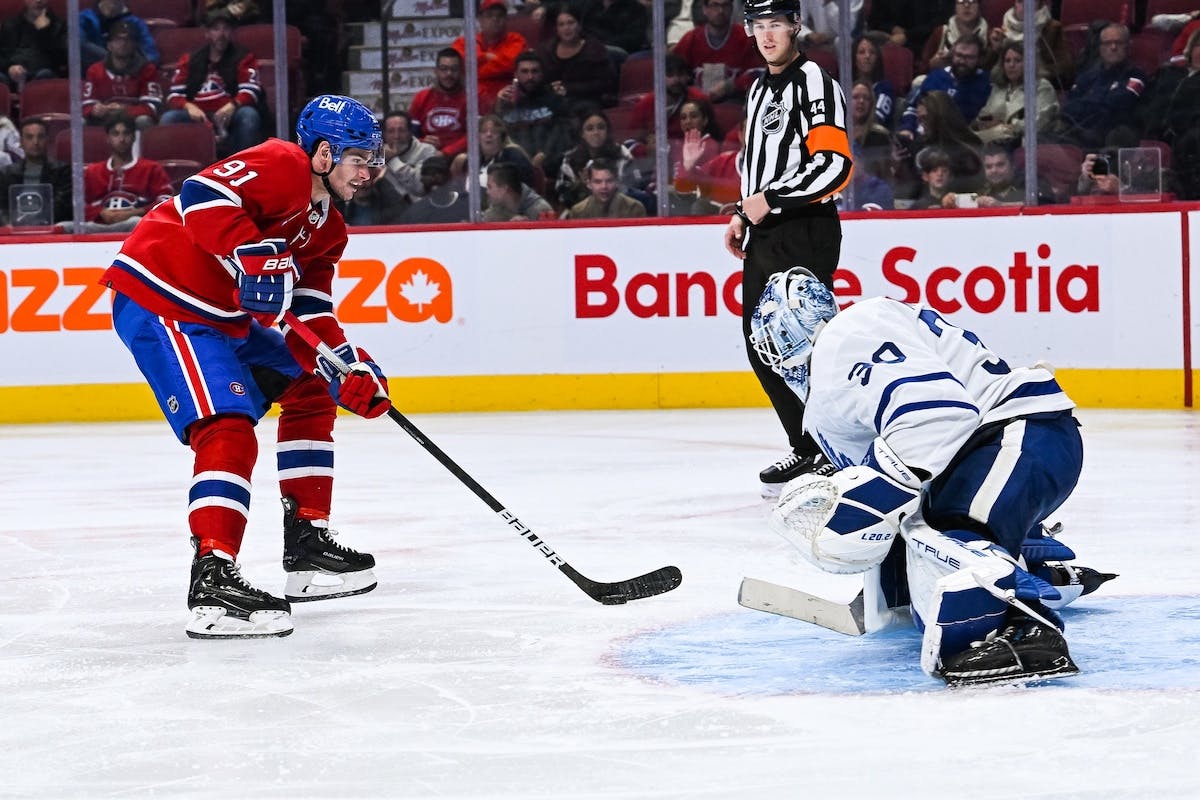 By Nick Alberga
3 months ago
Remember that dark and hollow feeling from back in May following another Game 7 loss?
Needless to say, it’s been a long 151 days since, but tonight, it’s go-time once again for the Toronto Maple Leafs.
Fresh off a solid 5-2-0 showing in the preseason, Sheldon Keefe’s squad are set to kick off their 2022/2023 regular season slate in Montreal at the Bell Centre. In total, four different players are expected to make their Leafs debut: Matt Murray, Calle Jarnkrok, Zach Aston-Reese, and Nicolas Aube-Kubel.
Meantime, the Canadiens are coming off a dreadful preseason where they went winless in eight games (0-6-2). Despite that, Cole Caufield could be primed for a breakout year. In 37 games under Martin St. Louis last season, the 21-year-old buried 22 goals. Also, the first overall pick from this past July, Juraj Slafkovsky, is expected to make his NHL debut. Let’s hope his first game is nothing like Auston Matthews’.
In 2021-2022, Toronto went 2-2-0 against Montreal.
Time: 7 p.m. ET (Sportsnet)
Starting Goalies: TOR Matt Murray (CONFIRMED) vs. MTL Jake Allen (CONFIRMED)
Projected Lineups:
Bay Street Banter:
Will the real Matt Murray please stand up?
Fresh off being acquired from the Ottawa Senators in the offseason, the two-time Stanley Cup champion will make his highly anticipated debut. In three preseason outings, Murray posted a 3-0-0 record to go along with a 0.970 save-percentage. Due to injury and inconsistent play, the former Soo Greyhound has only made 47 appearances over the past two NHL seasons. Simply put, the Leafs need Murray to be good this season —or else.
O Captain! My Captain!
After missing essentially all of training camp with an oblique strain, John Tavares is back in the mix and good to go for tonight’s season opener. In 79 regular-season games last season, the 32-year-old notched 27 goals and 76 points. Furthermore, he added three goals and three assists in seven playoff games.
What’s next for Auston Matthews?
It hasn’t been done in 28 seasons, but if someone can notch back-to-back 60-goal seasons again, it’s Auston Matthews. On route to a second straight Rocket Richard Trophy last season, the 25-year-old potted a ridiculous 60 goals in 73 contests. In fact, he’s tallied 101 goals over his past 125 regular season games. And that’s insane.
BETTING:
Courtesy our friends at PointsBet Canada, here’s tonight’s lines & odds:
(As of 11:40 a.m. EDT)