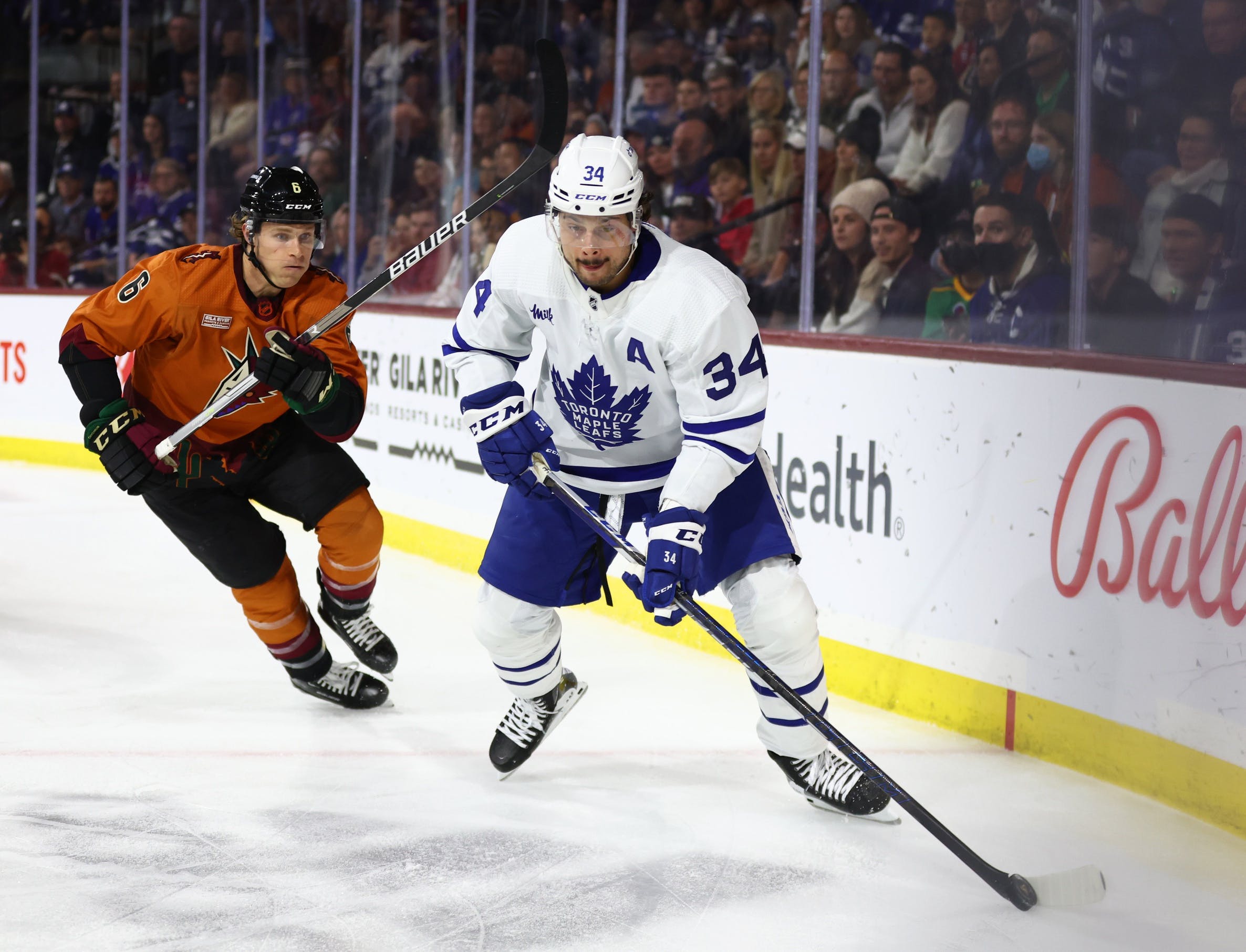 By Mike Gould
1 month ago
The Toronto Maple Leafs played four games against the Arizona Coyotes in the 2022 calendar year. They lost all four.
With their 6–3 win over Toronto on Thursday, Arizona completed its second consecutive series sweep of the Maple Leafs. They defeated the Maple Leafs 2–1 and 5–4 in 2021–22 and previously won 4–2 in Toronto earlier this season.
The Coyotes didn’t even need their two top forwards to chip in to defeat the Maple Leafs last night. Despite both Clayton Keller and Nick Schmaltz being held off the board, the Coyotes battled back from 2–1 and 3–2 deficits to win by a 6–3 score.
Vince Vaughn and Michael Phelps were among the fans in the sellout crowd at Mullett Arena for the Maple Leafs’ first-ever game in Tempe, AZ. The Coyotes celebrated the occasion by handing out free jerseys to every fan in attendance. And both teams put on a good show.
The game marked the return of defenceman Morgan Rielly to the Maple Leafs’ lineup, and he showed both good and bad signs in his first game since late November. He was on the ice when Pontus Holmberg scored Toronto’s first goal of the game, but he was also caught pinching in a tough spot when Coyotes forward Jack McBain scored what would go down as the winning goal in the third period.
Coyotes centres McBain and Barrett Hayton were the driving forces behind the team’s come-from-behind victory on Friday. Hayton chipped in three points (one goal, two assists); McBain scored back-to-back goals in the final frame to put the Coyotes firmly in the driver’s seat.
Former Coyotes defenceman Conor Timmins had a night to remember for the Maple Leafs, recording a pair of assists in 17:31 of ice time. He made his best play to set up Calle Jarnkrok for a go-ahead goal on the power play midway through the first period.
Finally, it’s worth noting former Maple Leafs winger Nick Ritchie recorded an assist, two shots on goal, and nine hits in 16:30 during Thursday’s game. That’s economical stuff.
The Maple Leafs no longer have to play against the Coyotes this season, and mercifully so. They’ll return to action at 7:00 p.m. ET on New Years’ Eve to visit the Colorado Avalanche at Ball Arena in Denver.
News
Recent articles from Mike Gould