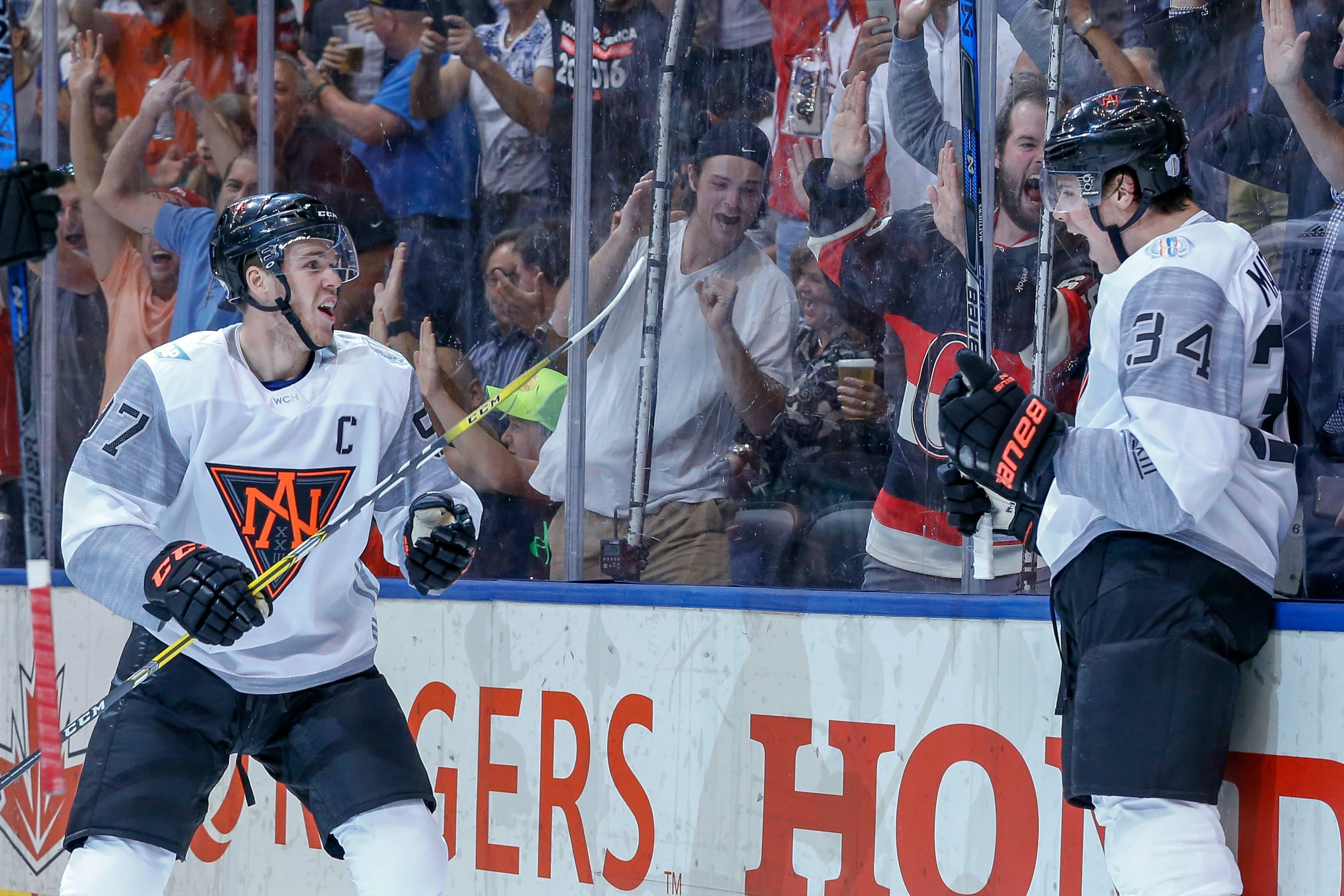 By Jon Steitzer
2 months ago
With NHL players being absent from the past couple of Olympics there really hasn’t been a best on best international tournament in a while. Even though the possibility of a best on best tournament even a year and a half from now could exclude Russia from the mix, it’s a gimmick the NHL is excited to bring back in the former of the World Cup of Hockey:
From NHL.com

PARIS — The NHL and NHL Players’ Association are moving forward with plans for a World Cup of Hockey in 2024, targeting a 17-day window in February to hold the tournament.

The World Cup of Hockey was last played in 2016, when all games were played in Toronto. There were also tournaments in 1996 and 2004.
“We’re moving full steam ahead and that means we’re continuing to have regular meetings,” NHL Deputy Commissioner Bill Daly said Wednesday during the NHL’s European Player Media Tour.
The 2024 tournament will feature at least eight national teams, with games played in North America and Europe, Daly said.
Meetings with the NHLPA and Luc Tardif, the president of the International Ice Hockey Federation, to discuss the World Cup were part of the trip to Paris.
“We’re out in market already moving ahead with plans for a February 2024 World Cup,” Daly said. “We’re still on schedule.”
Daly said the NHL and NHLPA are looking at a short list of markets to host games, including select European cities.
“We still want to play one pool in Europe, a preliminary round pool in Europe and a preliminary round pool in North America and move the semifinals and the final to a different city in North America likely,” he said. “I think that short list would universally encompass more traditional hockey markets.”
The tournament would likely take place across 15 days in February, with a day on the front end and a day on the back end built in for travel purposes.
Daly also said there are discussions about adding two nations to the tournament, bringing the total to 10 to create a qualification round to get down to eight teams.
“I think longer term, that’s our plan to have a qualification tournament at another time during the calendar,” Daly said. “Given the short timeframe we have between now and February 2024, if we have a qualification stage, I think it’s part of the tournament.”

At this point, it’s hard to imagine that we’ll be seeing Russians in the tournament, and at least for older curmudgeons like me, it’s nice to see that there won’t be the return of Team North America and Team Europe. While Team North America might have had the fun element of seeing rising stars playing together, Team Europe was a far more insulting approach as it pooled a number of players from countries like Slovakia, Germany, and others that would have been quite happy to play in uphill battles against other nations trying to pull off upsets. If you are going to have a tournament based on countries you should probably commit to that format.
As for Leafs involvement in the 2024 tournament, it’s safe to say we’ll see Toronto players on a number of the 8-10 teams.
@Auston Matthews is an absolute lock for Team USA, and he’s probably more of a lock for playing for them in 2024 than he is playing for the Leafs at that time.
@Mitch Marner will be on Team Canada, and I guess it will come down to injuries and how they are playing at that time for us to consider whether @Morgan Rielly and @John Tavares will still be Team Canada caliber at that point in their career.
@David Kampf seems perfectly capable of making the Czechia team.
@William Nylander is another lock for involvement with Team Sweden, and we’ll have to wait on the progression of @Timothy Liljegren and @Rasmus Sandin. @Calle Jarnkrok and @Pierre Engvall might also get some Swedish consideration, but given cap space and free agency, it seems very possible that Engvall won’t be a Leaf at that time.
Optimistically @Ilya Samsonov could be one of Russia’s backups assuming they play, and assuming things go as planned in Toronto for Ilya.
And last and probably in fact the least, @Denis Malgin could play for a Swiss team, assuming they are in the tournament.
Obviously, a lot can change over a year and a half, but there is the potential for the Leafs to be represented on a number of teams in the tournament that is still fairly light on details at this point.
More from The Leafs Nation: