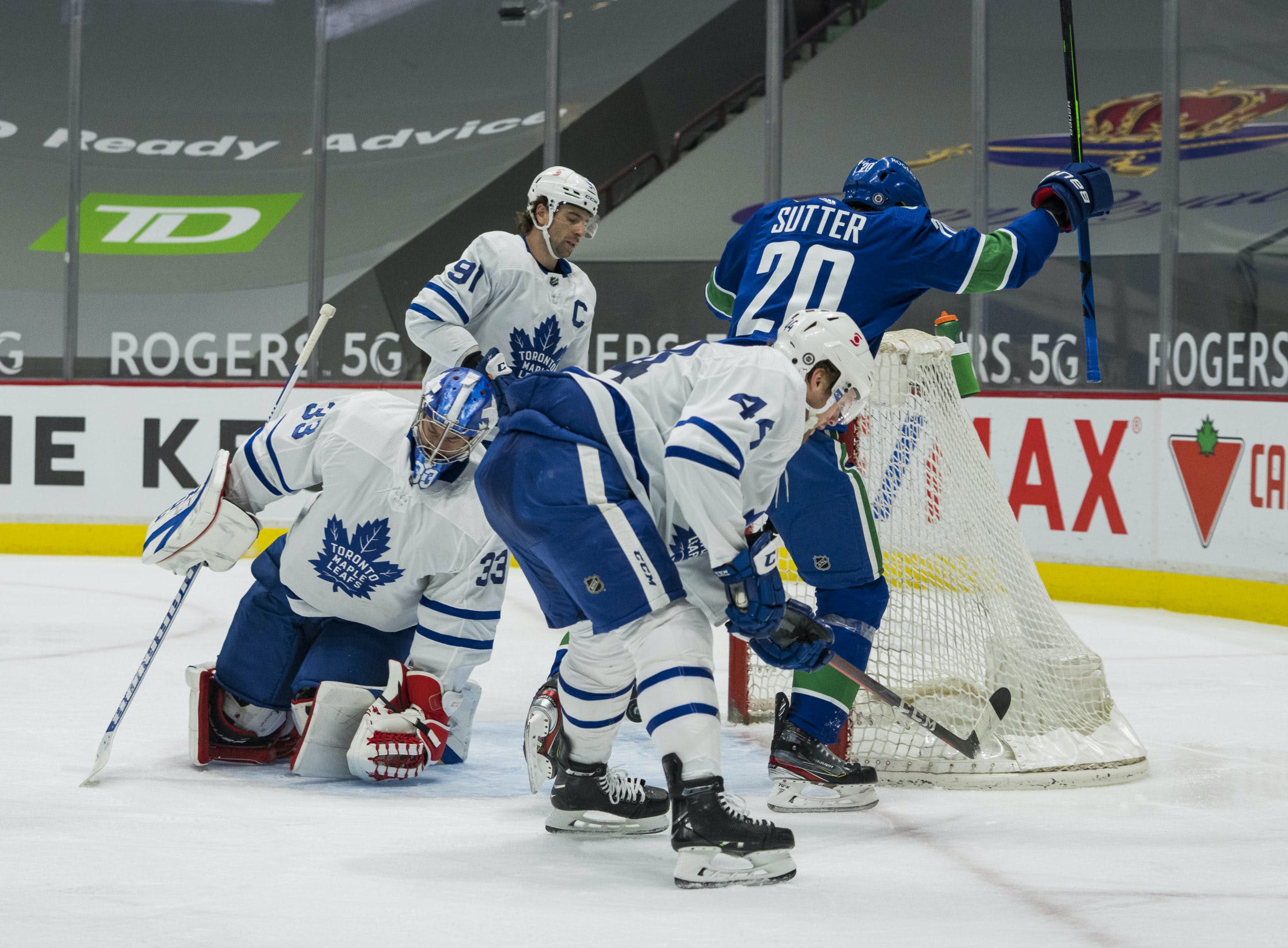 By Jon Steitzer
1 year ago
The Leafs lost 6-3 to the Canucks. Their second loss to Canucks following their return from COVID. The Leafs five loss in a row. If you are looking for silver linings and optimism in this post, you’ll be disappointed. I mean, we still can scrape together three worthwhile Leafs for the three starts, but to say that goaltending was an issue was an understatement. To say I want to see Morgan Rielly and Justin Holl on the ice together, who be a damned lie. To say I understand what Alex Kerfoot does on a nightly basis and get why he’s on the second line, will only be met with a confused look, followed by my desire to curl up in the fetal position. This game was unfortunate from top to bottom, and the Leafs have not inspired much confidence after Kyle Dubas boldly went all in by trading draft picks for depth.
The Leafs did pick up a powerplay goal, and Marlies callup Adam Brooks picked up a short handed goal, but even the high points tonight were quickly deflated. So let’s get on with it. We can salvage three stars tonight, so let’s do it.

Sandin playing his second game of the year for the Leafs, and it went well. I guess well-ish, given that he his partner (Bogosian) left the game with an upper body injury, and he was subjected to being a part of this mess, but much like Sandin’s other performances with the Leafs, he’s demonstrated confidence in controlling the puck, making calm plays, and generally looking comfortable in the more sheltered situations that Sheldon Keefe deployed him in. He certainly looks like he can play in the NHL every night, at least in bottom pairing situations, and he wasn’t out of place when given the opportunity on the powerplay late in the game after all was already lost either. One thing as Leafs fans we can always do is fall back on feel good prospects to pull us in off the ledge, and thanks to Rasmus for doing that tonight.

He might have played a big part of a goal going in against the Leafs, as he failed to pick up his man in front of the Leafs net, but John Tavares made up for it by scoring two goals of his own, including one on the powerplay, which right now seems like nothing short of a miracle. For a two goal night, it’s not one of the best ones I’ve ever seen, but you can’t fault Tavares when he was one of the big reasons the Leafs were in this game.

Apparently skipping meetings agrees with William Nylander because he stepped up and played like he had something to prove to his teammates. Nylander was the reason that John Tavares had two goals. Doing the heavy lifting on the first, followed by being a crucial net presence on the powerplay marker. If there’s one Leaf who truly gets a passing grade tonight it’s William.

Holy crap was he bad. At least two goals looked like they were from 1980s highlight reels that people point to in order to prove how far goaltending has come in the past 30-40 years. Rittich seemed to exist solely to let the air out of the Leafs whenever they seemed to be taking control of the game. There wasn’t a positive thing to say about Rittich tonight, and I’m not going to try. While it might be premature to write off a goaltender that you gave up a 3rd round draft pick for after one bad game, Rittich certainly has people thinking it. I know a lot of people say you can’t blame the goaltender. Tonight you can blame the goaltender. The fact that Holtby has stood on his head for the past two games for the Canucks only increases the outrage.

Let’s wrap this up because this was simply a miserable game to put even this amount of thought into. Tomorrow marks the debut of Nick Foligno at the Leafs practice, and with that comes some hope. We’re also now in the situation of waiting to see if Zach Bogosian is okay, and how long he’ll be out for. It could present an opportunity to keep Sandin in the lineup, and try Dermott on the right side, or we could possibly see the debut of Ben Hutton as a Leaf, or the highly anticipated return of Timothy Liljegren. I guess all of that can be worth looking forward to, and it’s probably enough for us to muster some optimism again for the Thursday night game against Winnipeg.
Uncategorized
Recent articles from Jon Steitzer