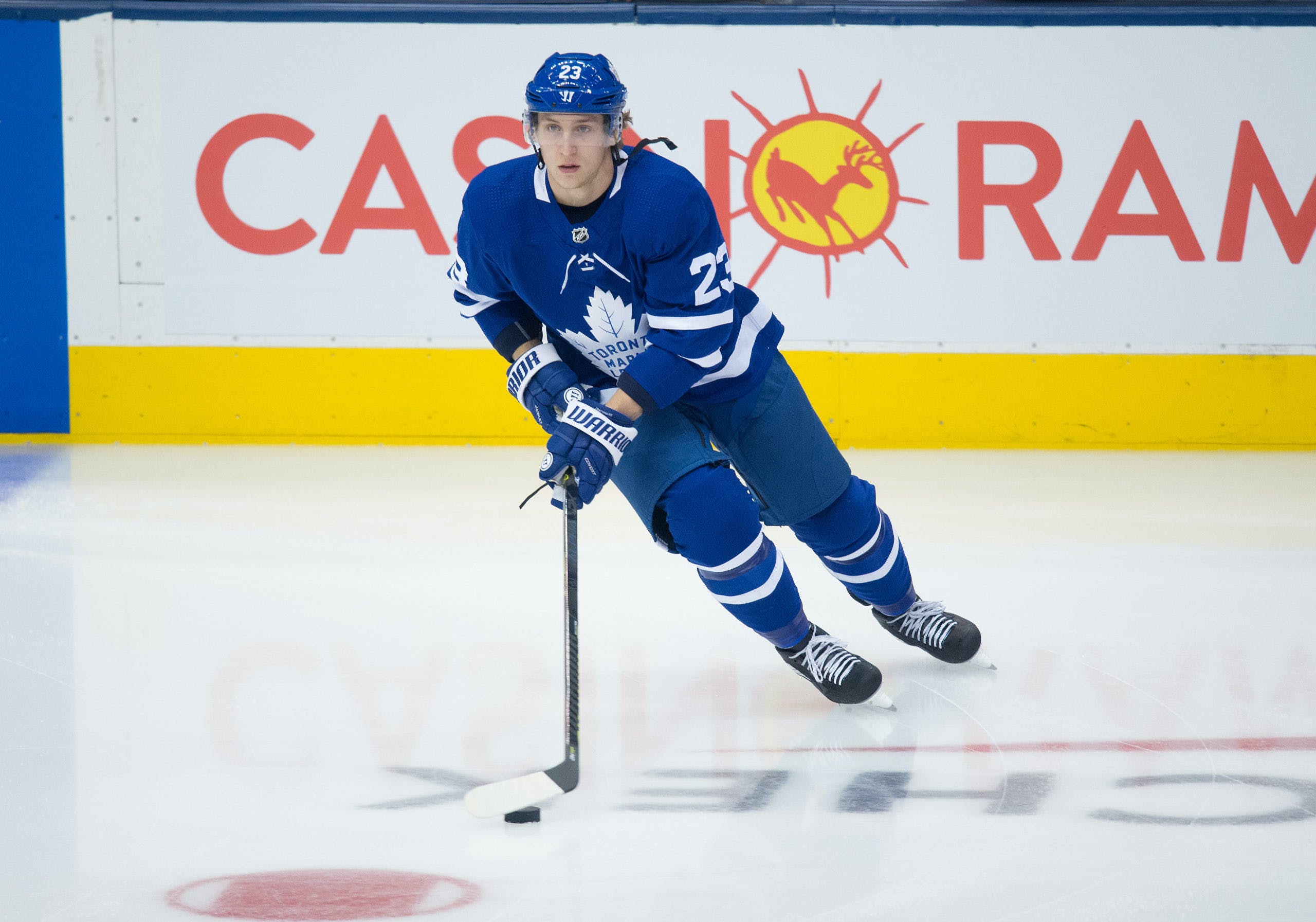 By Filipe Dimas
1 year ago
Travis Dermott may be one of the most divisive players on the Toronto Maple Leafs. It feels like every year that passes by, there’s a contingent of Leafs fans shouting out that this is the year Dermott breaks out and becomes the top 4 defenceman that his 34th overall selection status suggested he should be. Meanwhile others see Dermott as nothing more than a bottom line guy, one who could be taking away minutes from more deserving defenceman, or kids like Sandin or Liljegren who have a potential ceiling that far surpasses what Dermott has shown thus far in his young career.
That uncertainty about Dermott is reflected even within the TLN writing staff, where some had him ranked within the top 10, considering Dermott to be a valuable asset to this team while others had him barely making the top 20, dropping as low as 18th and thus seen as little more than a replacement player on the Maple Leafs roster. This will likely be the make or break year for Travis Dermott who is expected to be partnered alongside Rasmus Sandin for most of the season. If Dermott isn’t able to help Sandin reach his potential as the Leafs top ranked prospect, it may not be long before another young defenceman is taking his spot. That said, it is equally as likely that Sandin could be the offensive sparkplug of a partner Dermott needed to really excel his game by focusing on his defensive duties rather than being the bottom pairing’s lead puck handler.

Few things highlight the chaos that is trying to predict Dermott’s season more than seeing the steady decline of his production over his career. Despite the Leafs being one of the NHL’s most lethal offensive teams, Dermott’s points per 60 minutes (P/60) is less than half what it was during his rookie season. Some of that can be attributed to the fact that Dermott has plummeted down the Leafs depth chart with the acquisition of players like TJ Brodie and Jake Muzzin, as well as the breakout of Justin Holl. However, such a massive decline is still concerning, especially for a player whose had possession numbers also steadily decline over that time, indicated by his career Corsi For percentage (CF%) which has also fallen to just a hair over 50% over the previous two seasons after some very impressive numbers during his rookie and sophomore campaigns.
The numbers across the board, whether it be simple points or more complex analytics indicate Dermott has been steadily declining over the years. Leafs management seems to agree with this as indicated by a decreased role this past season that even saw Dermott getting scratched from the lineup during the playoffs. Leafs fans can only hope this serves as a wakeup call for the 24 year old who still has plenty of time to prove he belongs in the NHL, although that time with the Maple Leafs may be running out. As a young defenceman that has shown moments of brilliance and currently sits at 6th on the Leafs depth chart, he’s about as perfect a trade piece as it gets if the team finds themselves looking to upgrade their blueline mid-season.

As mentioned in the previous section, last season was a disaster for Dermott who saw his ice time drop from being steadily over 17 minutes per game throughout most of his career to just 13:13 through the 2020/2021 season. With only 6 points across 51 games and being credited with a mere 4 takeaways against 27 giveaways, Dermott seemed to have lost a step at both ends of the ice, and was little more than a warm body to plug into the third pairing for most of the season.
Unfortunately for Dermott, it seemed some heavy decisions were made against his favour coming right out of camp, with the defenceman not logging more than 15 minutes of ice time in a game until the 14th game of the season. Even then, that game in particular was a 7-3 drubbing of the Ottawa Senators where the Leafs spent much of the third period resting their star players.
Between a decreased roll, decreased production, and the chaos of the NHL’s season during COVID when stadiums were empty, the schedule was weird, and everything was just a little bit off, it’s easy to understand that Dermott’s frustration may have boiled over a few times leading to more harm than good.
The question now becomes whether Dermott can channel that frustration into motivation and have a bounce back season where his production and defensive game both rise to where they were earlier in his career. If Dermott is able to prove his fans right and once again show he has top 4 potential, it could mean the Leafs having some of the best defensive depth in the NHL and would alleviate the fears surrounding losing a piece like Rielly or Muzzin to injury.

Honestly… It’s anyone’s guess.
We know that Dermott will almost certainly be starting the season as the team’s number six defenceman on a line with Rasmus Sandin. What happens after that is entirely up to Dermott and Keefe. Should Dermott bounce back, we could very well see him move up in the lineup, perhaps taking Justin Holl’s spot, or even Morgan Rielly’s if the team decides to split up Rielly and Brodie at some point.
Unless Dermott really impresses out of camp, expect his ice time to once again be on the lower end at season’s start, especially after being scratched through most of the playoffs. But with Zack Bogosian gone, Dermott really has a chance to show he belongs in the lineup full time by being defensively responsible and helping form a strong partnership with the offensively talented Sandin on the blueline. If he plays a smart possession game and is able to get the puck up ice to the team’s talented forward group the points will come, but as a third pairing defenceman the priority for this season will be Dermott showing he can be relied on to step onto the ice and kill some time without error, buying an opportunity for the team’s star players to later take advantage of a mismatch against their opponents own third pairing defenceman.

This highlight shows exactly why despite everything said so far, many people still believe in Travis Dermott. He can carry the puck, he can thread the needle with passes, has some great speed, and isn’t afraid to rotate into crashing the net if the situation allows for it. Dermott has shown flashes of brilliance through his first four seasons in the NHL, and it’s left a lot of people hopeful of what else is to come.

Travis Dermott has said in the past he’s a Tim McGraw fan so what better goal song could there be for him than one of McGraw’s more upbeat party tunes?
Stats from Hockey Reference
Content
Recent articles from Filipe Dimas