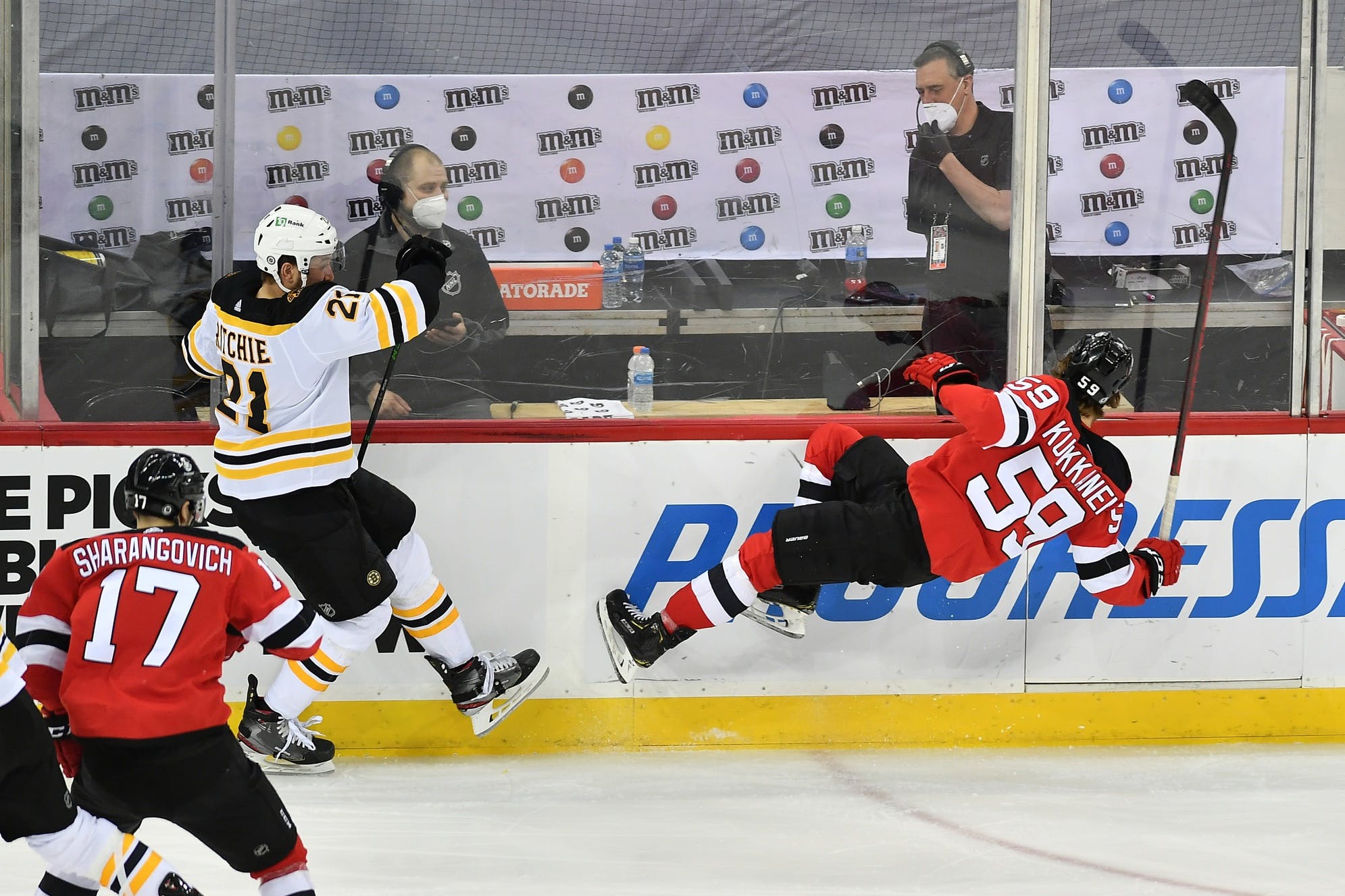 By Mark Norman
1 year ago
Flashback to the 2014 NHL Entry Draft — mercifully Dave Nonis’ last one at the helm of the Leafs’ draft table. The Leafs are up at pick number eight with an assortment of options on hand. There was @Nikolaj Ehlers; a 6-foot-0 skilled Scandinavian winger. There was @William Nylander; a 5-foot-11 skilled Scandinavian winger. Lastly, there was @Nick Ritchie; a 6-foot-2 power forward from Orangeville, Ontario.
Now, remember that at this point in time Brian Burke had brainwashed many in Leafs Nation that the key to success was through “pugnacity, testosterone, truculence, and belligerence.” It was a team-building view shared by his successor, Nonis, as evidenced by the Mikhail Grabovski-David Clarkson switcheroo the prior summer. For many, Ritchie was the obvious pick, the type of player this iteration of Leafs management dreamt about. There was no way he was getting past the Leafs here, many thought.
But then the funniest thing happened: the Leafs passed on Ritchie, choosing William Nylander instead. Factions of Leafs Nation were incensed to see a player with Ritchie’s package of size, strength, and shot slip through the Leafs’ fingers.
As we all now know, the Nylander pick has proven to be the right decision. But now those who wanted Ritchie seven years ago finally get to realize their vision of seeing him wear the Maple Leaf.

Here are some key metrics from last season (5v5 stats: 197 forwards with >600 minutes TOI | PP stats: 92 forwards with >125 minutes TOI)
Ritchie, who had a career-high shooting percentage last season, placed 66th out of 197 forwards in 5v5 goals-per-60 in 2020-21, scoring at a similar rate to players like @Artemi Panarin (0.88), @William Nylander (0.88), @Sebastian Aho (0.87), @Leon Draisaitl (0.86), and @Mark Scheifele (0.85). Widen that sample to the last three seasons and you’ll see players that are a little less surprising to be in his vicinity: Ritchie’s 0.68 goals-per-60 from 2018-21 places him in the same neighbourhood as fellow middle-six forwards @Jared McCann (0.68), @Phil Kessel (0.68), @Dylan Strome (0.68), @Cody Eakin (0.67), and @Eric Staal (0.67).
Keeping with 5v5, Ritchie placed 126th out of that same group of 197 forwards in primary points-per-60. Ritchie should never be confused with a playmaker: his primary assists-per-60 (0.35) ranked 165th last season.
Ritchie had a cushy position in front of the net on the Bruins’ top PP unit for much of last season, and he finished 83rd in powerplay TOI per game. His 3.20 points-per-60 on the powerplay landed him 78th among 92 forwards who saw more than 125 minutes of powerplay time.
Fans of the rough stuff will be happy to know that Ritchie is a hitting machine. He placed 8th in Hits For-per-60 at 5v5 in 2020-21, and is 7th in that same metric since he entered the NHL in 2015-16 (minimum 4500 minutes played). Surrounding him is a veritable who’s who of checkers: @Tom Wilson, @Leo Komarov, @Milan Lucic, @Adam Lowry, and @Zack Kassian. Leafs opponents will be leaving the arena with a few more bumps and bruises this year.
Lastly, Ritchie has been criticized for being undisciplined. One of the most glaring examples of that was in Game 4 of the Bruins’ 2020 second-round playoff series against Tampa Bay. The Bruins, down 2-1 in the series and 2-0 in the game, had to kill a five-minute major after Ritchie demolished Yanni Gourde with a very late hit. The Lightning would score once on that extended powerplay and go on to win the game 3-1. While the Bruins battled back to force a Game 7, it was the Lightning who ended up winning the series in that deciding game. Many Bruins fans look back on the Ritchie hit as a turning point in the series. Since entering the league, Ritchie’s -75 minor penalty differential leads the league among those with more than 4500 minutes played, 10 clear of second-place @Evander Kane.

It was a year of ups and downs for Ritchie in 2020-21. He started the regular season on a tear, putting up 14 points (7G-7A) in his first 17 games. Nine of those points came on the powerplay, where he spent the majority of the year playing alongside @Patrice Bergeron, @Brad Marchand, and @David Pastrnak, finishing fourth among Bruins forwards in PP TOI/GP.
In his final 39 games, Ritchie put up just 12 points (8G-4A), with no powerplay points. This included stretches of 8 and 10 games without a point. It was an inconsistent season in what has been an inconsistent career for Ritchie.
Ritchie was mostly deployed on the Bruins’ second and third lines, with his most common linemates at 5v5 being @David Krejci, @Charlie Coyle, and @Craig Smith. The arrival of fellow left-winger @Taylor Hall on April 12th resulted in a slight downturn in Ritchie’s ice time, and could have possibly negatively impacted his offensive totals during his final 17 games of the season:
His hot and cold play aside, Ritchie finished the season with a career-high 15 goals on the strength of career-best 12.4% shooting. His points-per-game was the second-best of his career.
However, Ritchie failed to make much of a positive impact in the playoffs for a second straight year as a Bruin. In 19 games over the last two postseasons, Ritchie scored just two goals and assisted on three while continuing to be on the negative side of the ledger in penalty differential.
Once considered the quintessential Bruins player, Ritchie was not qualified this summer, making him an unrestricted free agent.

Watching Ritchie play, there are flashes of @James van Riemsdyk. While he doesn’t have the wheels or offensive upside that JVR does, Ritchie effectively uses his frame to shield the puck from defenders, loves camping in front of the net, has a knack for scoring from in tight, and is excellent at deflections.
At minimum, Leafs fans can expect Ritchie to score goals at a second-liner’s rate and amass points at a third-liner’s rate, while probably missing 10-15 games due to various injuries or suspensions caused by his rough-and-tumble style. At maximum, he could be propelled to new heights if he nets himself a spot at left wing on one of the Leafs’ top two lines. 25 goals and 50 points would not be out of the question.
The most exciting thing about Ritchie’s addition is that he brings a unique combination of snarl and skill that has been missing in the Leafs’ top six. The Leafs added @Wayne Simmonds last year to address the snarl component, but his days as an offensive contributor seem numbered, and he is more well-suited for a fourth-line role at this point. They had @Zach Hyman’s tenacity and never-say-die attitude in the top six for years, but Hyman inspired panic through his dogged forechecking, not fear. Nick Ritchie is a different animal, a bringer of pain: on any given shift he will truck you through the boards, not give an inch in front of the net, be almost impossible to get the puck from in the corners, give you a bloody lip in a scrum, or shovel a puck into the net from a goal-mouth scramble. Sometimes he’ll do all five in one shift.
He will take a lot of minor penalties… but that is not necessarily a bad thing. For years the penalty-averse Leafs have had issues drawing powerplay opportunities of their own, as NHL referees fixate on evening up calls. Ritchie’s lack of discipline may have an unanticipated positive effect in the form of more 5v4 opportunities for the Leafs to capitalize on. Which version of the Leafs powerplay shows up is yet to be seen, however.
Check out this montage of Nick Ritchie highlights from last season. Watch for the goals and fights, stay for the cringeworthy Don Cherry rants.

If I were making a montage for Ritchie, this Saliva track would be my song of choice. Click (hit), click (punch), boom (twine).
(All stats courtesy of Evolving-Hockey.net and NHL.com)
Uncategorized
Recent articles from Mark Norman