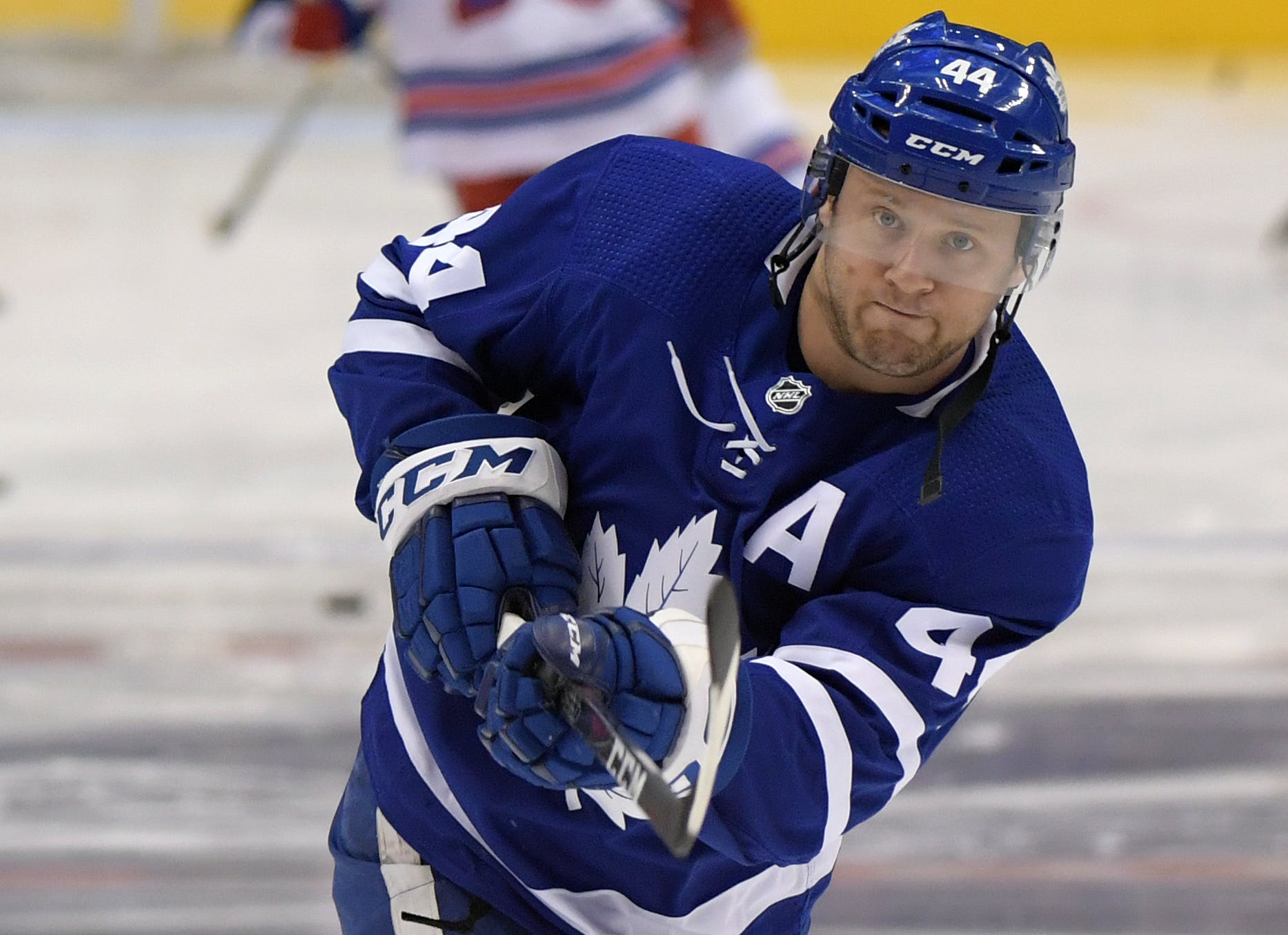 By Ryan Hobart
1 year ago
NOTE: TheLeafsNation is run out of Canada, on the traditional and treaty territory of Indigenous and First Nations peoples. We are posting this content today, the National Day for Truth and Reconciliation, while respectfully keeping our minds on what we each need to do for the betterment of our collective society between settlers, Indigenous peoples, and other non-Indigenous peoples in Canada and across North America. We recognize the racism suffered by Indigenous peoples to this day and the genocidal actions taken by the Canadian government against Indigenous peoples. Learn more at www.canada.ca and www.orangeshirtday.org.
After getting through the goalie tandem of Petr Mrazek and Jack Campbell at #9 and #8 respectively, we’re now getting into the core of the Leafs best skaters, beginning with Morgan Rielly. Some might consider him to be the Leafs’ best player on defense, others not so much. Generally, everyone can agree that he’s one of the better offensive defenders in the league, but depending on who you ask, his impact on the defensive side of the puck ranges from somewhat unimpressive to outright detrimental.
While Rielly is ranked 7th, he ranged from 5th to 9th in our group’s rankings.
While Rielly is enigmatic in terms of quality, he’s universally loved as a human being (except for a certain incident where it sounded as if he shouted a homophobic slur, though I’m fairly sure that wasn’t the case, and the NHL agreed, not that I’d put much stock in that). He seems to be a genuinely good person, and his relationship with Tessa Virtue (who doesn’t have a PuckPedia page but probably should!), multiple-gold-medal-winning ice dancer and national treasure, certainly doesn’t hurt.

We know that one of Rielly’s biggest strengths is producing points. From 2016 to 2021, he ranks 16th among all defenders (with at least 1000 minutes of TOI) in points per 60 minutes with 1.67.
He also ranks 11th in the same group for on-ice Corsi For per 60 minutes, which is how many shot attempts the team is flinging at the net while he’s out there, at a massive 62.7. That’s more than 1 attempt per minute of ice time, which is a good bar to clear.
However, reversing that, he’s 48th last (or 234th of 282) in the opposite category of on-ice Corsi Against per 60 minutes, which is how many shot attempts the other team is flinging at his net while he’s out there, at 59.18.
Doing some quick and easy math, we can see that Rielly is a net positive, with a Corsi differential (Corsi For minus Corsi Against) per 60 minutes of 3.51. That’s pretty good, but puts him 66th in the league, outside of the range of being a “top pairing” defender.
Instead of a differential, we can look at that as a percentage (Corsi For divided by (Corsi For plus Corsi Against)). That’s the very common statistic known as CF%, and Rielly sits 71st, again just out side of a “top pairing” billing.
It’s worth noting that last season, Rielly trended back toward a “balanced” set of Corsi For and Corsi Against as he got more experience, and especially as he was paired with a competent partner (we’ll get into that in a moment). Last year his Corsi For per 60 and Corsi Agaisnt per 60 both dropped dramatically, to ~54 and ~51.5 respectively. So from a percentages perspective, he’s just as good, but the amount events have gone way down, which is a sign of a more calm and procedural approach to the game.
All of the stats above are from Evolving-Hockey.com, and the Corsi stats all have Score and Venue adjustments. This means that we’re giving some adjustments to the Corsi/shot attempts depending on what the score was at the time (if your team is losing, shot attempts are worth less, because we know that a losing team is naturally going to generate more shot attempts) and what venue the game was played in (some of the scorekeepers at certain arenas have a tendency to be more liberal with what they define as a shot attempt).
The last stat I want to show for Rielly is ice time. We’ve noted above that his results haven’t been exactly representative of a top pairing defender. And yet, as I’m sure you could hypothesize, Rielly’s time on ice is that of a top pairing defender. In fact, he’s 23rd in the league in all situations, putting him in the category of #1 defender for ice time.
So, to summarize: Rielly appears to be a good second pairing defender in terms of on-ice play, that scores points and gets ice time at a #1 defender’s clip. He’s not a Norris-winning defender, but as long as the Leafs can maintain a balanced top two pairings like they have now, he’s perfectly well suited for this team.

The story of the 2020-21 season for Morgan Rielly can be summed up simply: TJ Brodie.
Over the years, Rielly has been tied to questionable defense partners in Nikita Zaitsev, Cody Ceci, Ron Hainsey, and Matt Hunwick, and that seemed to pull his results downward. Now, with Brodie having been brought in this past offseason and his history playing a top pairing role with Mark Giordano in Calgary, it seemed as if they had a real shot at a true top pairing that they’ve lacked since McCabe and Kaberle were here.
Rielly didn’t exactly perform better than in the past, but his results were much more balanced than the previous years. The pairing felt comfortable, allowing Rielly to be the main puck carrier, but it helped having Brodie being more than competent in that respect as well. Brodie’s ability to defend the blue line, an area Rielly struggles with, was very complementary.
Rielly scored 35 points in 55 games last year during the regular season, which is a really good showing for a blueliner. In the playoffs, he had some moments that were really impressive and others that left you wondering why he has such a big role. Obviously the series didn’t end as Toronto hoped, but that can hardly be placed on Rielly’s shoulders.

Being 26 last season, 27 now, means we’re no longer looking for growth in Rielly’s game; he’s a veteran on this team. However, his role changed with Brodie, and with the emergence of the Muzzin-Holl pairing as a shutdown pair, so if that role were to change, his results would probably change also. However, all indications point to them keeping the defense core pretty much the same as last season, so we can expect that balanced performance to continue.
Rielly’s contract expires at the end of this season, so he’ll be very motivated to make the most of the year.  Whether that turns into a jump into a true #1 defender or not is yet to be seen, but I would definitely be surprised. To make a decent-sized leap like that at this stage of his career would be relatively unheard of.

Here’s a pretty good highlight pack from Morgan Rielly’s career so far. I know I got chills when I watched it so I hope that you do too.

Morgan Rielly’s Goal Song Would Be…

A difficult choice, but since Morgan and Tessa appeared on Max Kerman’s Instagram story a while back, I have to go with an Arkells tune. They have a pretty big discography for a modern band, but I’m going to go with…
Uncategorized
Recent articles from Ryan Hobart

News
Liljegren ties it up late and Marner scores a beauty in overtime to beat the Rangers 3-2: Game Highlights
Do Not Sell My Info
Privacy Settings