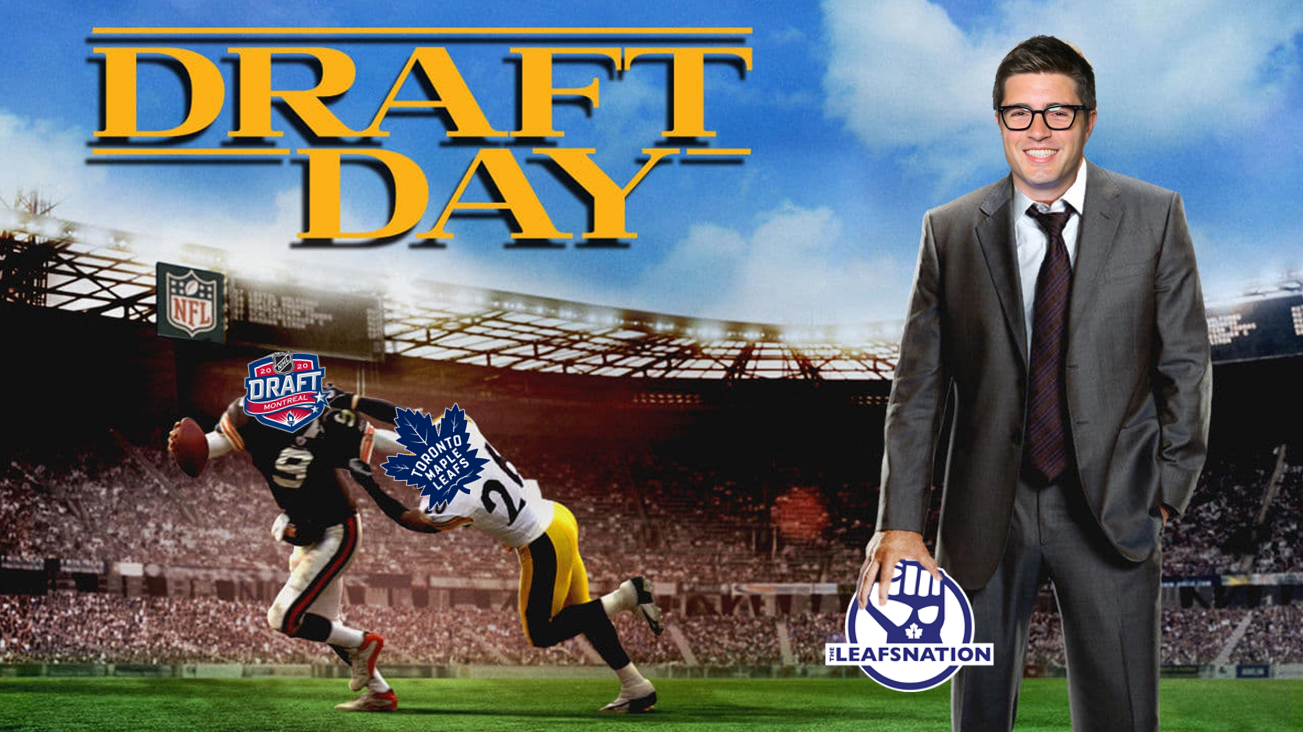 By Jon Steitzer
6 months ago
It’s draft day and Sonny Weaver better make a splash or else Anthony Molina is gonna have his ass.
It also means that our expectations are high and we are on the first day of the offseason where something is guaranteed to happen. The Leafs have a first round pick, at the very least they are trading down into the second round (please don’t do this, the draft is so insufferably slow, you can’t do this to us, Kyle.) A much more exciting outcome is that the Leafs actually make their pick or do literally anything in addition to making that pick. History has taught us that is probably asking too much, but with 32 GMs horny for upgrading their rosters, I want to believe something interesting can happen.
It’s in the spirit of that we have our TLN draft predictions post. We’ll have another one shortly looking at free agency. I feel like we are a bit all over the place in our opinions so let’s dive in. We had 9 writers participating, but only I gave the correct answers.
Who should the Leafs select with their first round pick?
Rutger McGroarty had a whopping 3 votes to lead the pack and not a single other player received two votes. Some of the other names out there include Lambert, Ohgren, Ostlund, Kasper, Miroshnichenko, and Mattias Havelid. I guess we really hate Canadians.
What should the Leafs do with their first round pick?
44% Select the player
33% Trade Down
11% Trade for a player
11% Trade Up
I fancy myself the fun one of the group with my trade up vote, but selecting the player is probably the most practical thing as there isn’t a whole lot of difference between who you will get with pick 11 and pick 30 this year. My anti-trading down belief is just due to the pain of waiting and we’ve already done a lot of that this offseason. My personal philosophy is that I’d rather the Leafs be entertaining than good, so take that for what it is worth (not much.)
How many times will the Leafs make picks at the draft?
The entire team of TLN writers said they’d make between 4-6 picks, so definitely expect some trading. Obviously trading down gets you there instantly, but I wouldn’t doubt we see a 2023 pick go for a 2022 at some point as well.
What player likely to be taken outside the first round do you want the Leafs to draft?
With two votes, Nick Moldenhauer was the leader and that wasn’t a bad choice. Personally I’m counting on Russians sliding in the draft and hoping Toronto can snag Gleb Trikozov in the third round. That’s a lot of wishful thinking on my part. The other names were Christian Kyrou, Jordan Dumais, Ryan Greene, Owen Beck, and Tyler Brennan.
How many trades do the Leafs make during the draft (pick swaps count)
8 out of 9 of us said 1 or 2 trades. One of us was optimistic and said three or more trades. With pick swaps being an option, it’s possible.
Leafs player most likely to be dealt at or before the draft
56% Justin Holl
33% Petr Mrazek
11% Joseph Duszak
With Jacob Middleton signing a deal for 3 years at $2.45M AAV I am certain we are underestimating the trade value of one Justin Holl. The Petr Mrazek stuff will be interesting as well, especially with Dubas pumping his tires a bit today, and one way or another Duszak isn’t going to be a Leaf next year. Maybe someone thinks his rights are worth a 7th with some conditions.
Finally here are some of our boldest predictions for the day:
The last two are the kind of excitement I’m looking for. Maybe I’ll pretend to be a Flyers fan tomorrow because I don’t doubt they’ll try something crazy. As for the predictions, I hope they all come true and somehow the Leafs get Geekie and Savoie, trade for Puljujarvi, a goaltender, and lose Mrazek in the process. You’ve done things the cold calculated way long enough, Kyle. Let’s go crazy.
More From TheLeafsNation.com: