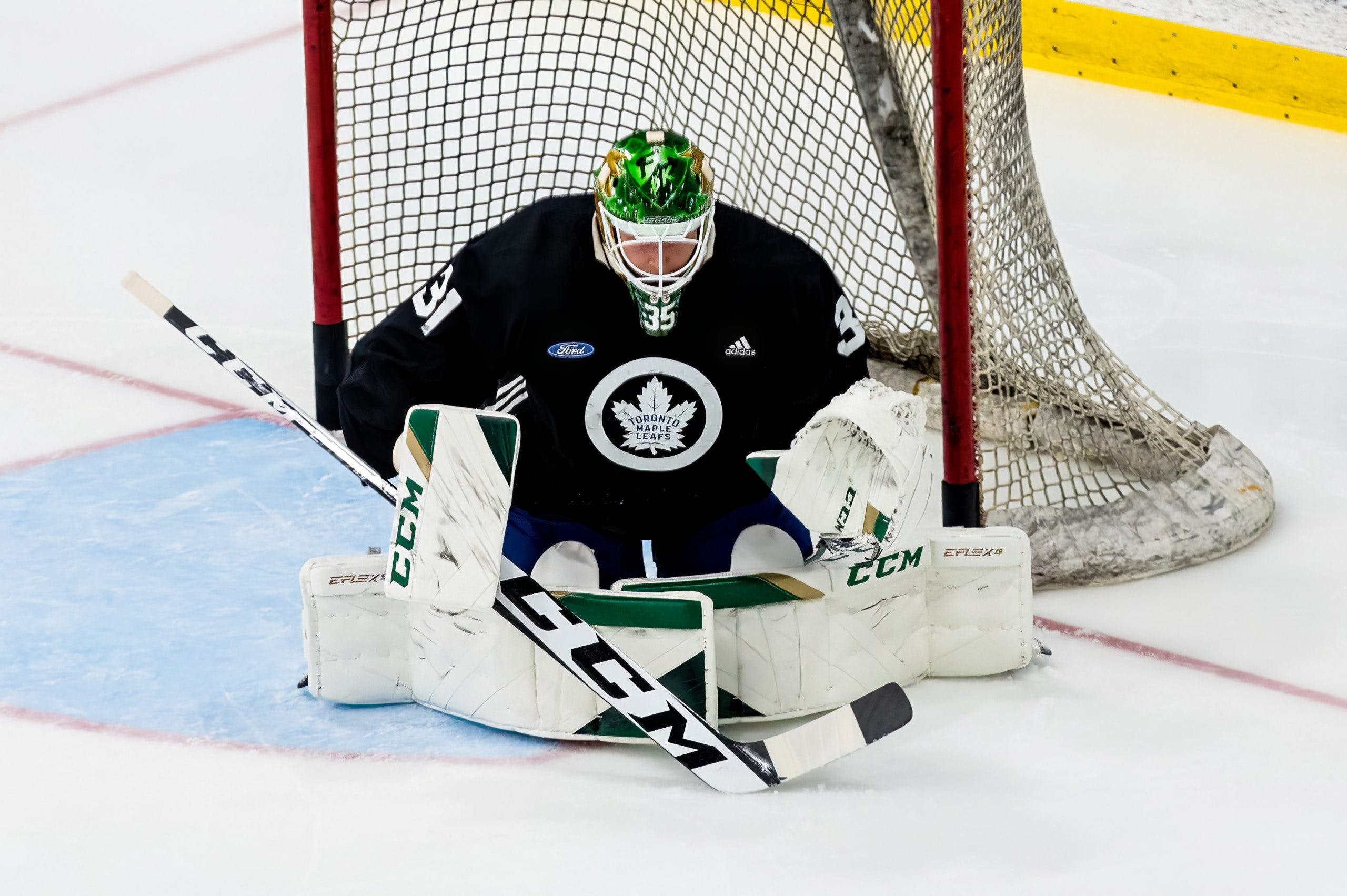 By Steven Ellis
8 days ago
Goaltending looked to be Toronto’s biggest weakness heading into the 2022-23 season. And, yet, it’s often been a big strength.
Ilya Samsonov has been excellent recently and could be on the verge of earning more time as a No. 1. Matt Murray has had flashes of brilliance, but he’s on a downswing right now and needs to find his confidence again. And then there’s Joseph Woll, who hasn’t lost a game at any point this season, and there’s some real hope in the crease.
In fact, there’s an argument to be made that this is the deepest the goaltending has been in quite some time. Erik Kallgren has some significant NHL experience, Keith Petruzzelli has had some great moments this year, and their three European goalies are statistically near the top of their respective leagues.
Today, let’s break down the team’s six contracted goalie prospects and what might be next for them. Three others– Dylan Ferguson, Luke Cavallin and Dryden McKay – are part of Toronto’s minor system, but the Leafs don’t hold their rights. So I won’t count them. It’s worth noting that still has a tryout deal with the Toronto Marlies but hasn’t played since November against Abbotsford, falling out of favor once Woll became healthy and Kallgren was sent back down.
So, let’s take a look:

Nov 26, 2021; San Jose, California, USA; Toronto Maple Leafs goaltender Joseph Woll (60) warms up before the game against the San Jose Sharks at SAP Center at San Jose. Mandatory Credit: Stan Szeto-USA TODAY Sports
Woll’s season has been absolutely bonkers, with the 24-year-old starting off with a Marlies-record 11-0-0 run. He missed the first few months of the season and only played 19 games between the NHL and AHL last year due to injuries, but he’s back on track and playing the best hockey of his career.
The timing is definitely interesting, given his lack of playing time the past few years. And with Ilya Samsonov an RFA this summer, how do the Leafs handle things moving forward? Woll is playing out of his mind right now and there’s a good argument for him to earn some NHL time sooner rather than later, and he has another two years left on his deal. So, really, there’s no rush, but he’ll be 25 next season, too.

Toronto, Ont. Toronto Marlies goaltender Keith Petruzzelli (#80) during a game at Coca-Cola Coliseum on Nov. 26, 2022. (Photo by Steven Ellis/Daily Faceoff)
Petruzzelli has felt all the ups and downs you could ask for from a goaltending prospect this season. He started the season with a 6-0 record before getting called up to the Maple Leafs, where they were forced to sign him to a contract due to injuries to Samsonov and Murray.
Petruzzelli then struggled in a few starts and has bounced around the AHL and ECHL over the past two months, killing any momentum he had early on. So while he has a solid 9-4-0 record, it’s tough sledding for Petruzzelli, especially with Woll dominating like he is right now. Petruzzelli essentially became a prospect by accident – one the Leafs liked to have in the system, but likely wasn’t going to be signed. Now, he has another year on his deal and likely will become more important next year, depending on the futures of Woll and Kallgren. Consistency is critical for Petruzzelli going forward.

Apr 12, 2022; Toronto, Ontario, CAN; Toronto Maple Leafs goalie Erik Kallgren (50) makes a save against the Buffalo Sabres in the second period at Scotiabank Arena. Mandatory Credit: Dan Hamilton-USA TODAY Sports
Does Kallgren have a future with the Maple Leafs? Or could he be a cheap deadline acquisition to help uncluster the goalie crop? Kallgren was called up when Woll and Petr Mrazek were hurt last year and had some bright moments with the big club. He then struggled in 10 games with the club this year, but did help the Leafs earn points in seven of his 10 games.
But a return to the Marlies has seen him slip with a rough .870 save percentage in 10 games. Juxtaposed beside Woll, or even Petruzzelli, has made Kallgren’s numbers look worse. He’s an RFA at the end of the season, and if Woll keeps excelling and Petruzzelli can find his groove again, there might be no reason to keep him. At the very least, his NHL experience is nice and is an easy call-up option if the Leafs need someone ready to go.

Etobicoke, ON – July 22, 2022: Toronto Maple Leafs goaltender Dennis Hildeby (#31) during a development camp scrimmage at the Ford Performance Centre in Etobicoke, Ontario, Canada (Photo by Steven Ellis/Daily Faceoff)
Currently, in his first full SHL season, Hildeby has turned some heads with Farjestad. He has an 8-5-0 record with two shutouts and a solid .927 save percentage, good for third in the league among goalies with at least 10 starts. He’s mainly backing up 2022 Canadian Olympian Matt Tomkins, but his numbers have been better from an overall experience.
Hildeby was drafted as an overage prospect last year, so he’s one that, in theory, should be farther along in his development compared to some others. Already under contract, Hildeby could come over to the AHL next year in hopes of making a good run at a full-time spot with the Leafs before long. Hildeby is a bit of a late-bloomer, but one that has played well enough to earn a shot at being a backup one day.

After doing a lot of heavy lifting with Bars Kazan last year, Akhtyamov moved to Neftyanik Almetievsk this year and has been excellent. He’s up to an 18-10-3 record with six shutouts and a .944 save percentage, making him one of the better goalies in the second-tier Russian league right now.
Drafted in the fourth round in 2020, Akhtyamov is mid-sized at 6-foot-1, which hasn’t hurt him in the slightest in Russia. A call-up to Kazan’s KHL team seems unlikely given their stacked goalie situations, but it would be nice to see him play against stronger competition. His contract in Russia expires this spring, and he could come over and fight in Toronto’s minor system. But unless that really starts to clear up, a short-term deal to fight for KHL playing time would be the best bet. So while it’s a bit tough to see where Akhtyamov fits in the team’s plans long-term, it’s good to see the progression, at least.

An athletic goaltender with good size, Peksa has shown some solid upside. He’s the starting goalie for Bars Kazan in the KHL and has some good numbers despite playing on a low-scoring team. He holds a 13-17-5 record with two shutouts and a .921 save percentage in his first season of pro play after crushing the MHL a year ago.
Just like with Akhtyamov, Peksa is playing in a league that doesn’t challenge goaltenders a whole lot. So it’s tough to get a really good read on his long-term potential, but the 2021 sixth-rounder is just 20 – there’s plenty of time. Peksa’s deal ends in a few months so it’ll be interesting to see what the Leafs decide to do with him. More time in Russia – preferably as a KHL backup – will be beneficial. Of all the prospects here, he’s probably the one with the most leeway time.
Editorials
Recent articles from Steven Ellis