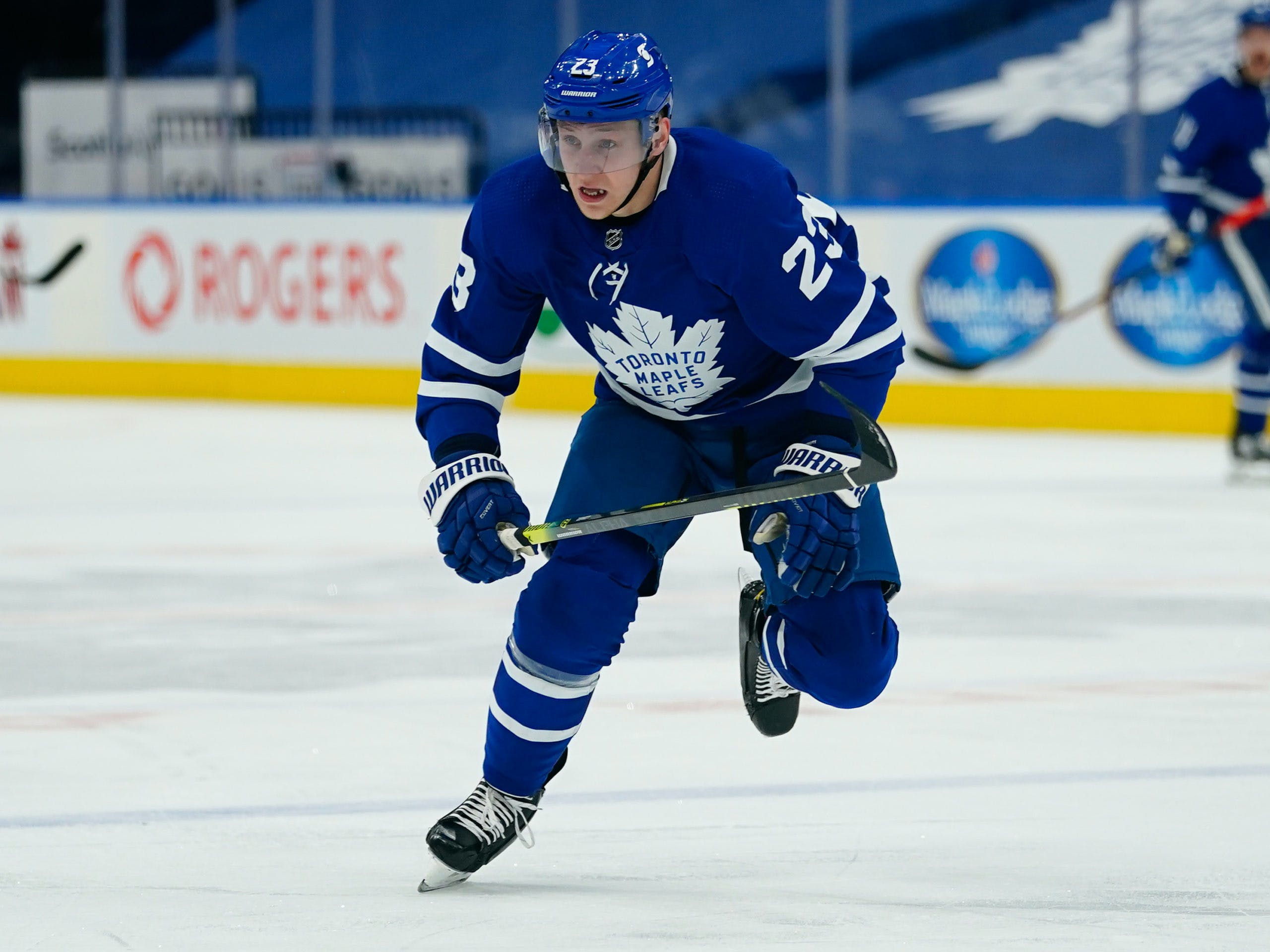 By Jon Steitzer
1 year ago
As we continue our march through the Leafs roster and pending free agents it seemed inevitable that once we got to @Travis Dermott we’d wind up talking about the expansion draft. There’s a good reason for that, and it’s the Leafs are likely to go with a protect four forwards and four defenseman approach and in that scenario the best Leafs defenseman available to Seattle is Derrmott.
With @Rasmus Sandin very much going to be a NHL regular next season, and @Timothy Liljegren at least making a strong case for platooning in and out of the lineup as a seventh defenseman to start, it seems that Dermott might be a bit more expendable and to that I say, yes, those players do make it so you don’t stress about losing Dermott as much, yes you might be excited to see what Dermott can do with more responsibility in Seattle, but no a cost controlled defenseman with upside is not someone the Leafs should be trying to lose.
To date the biggest hinderance in Dermott taking the next step is probably former Marlies teammate @Justin Holl. The fact that Holl found chemistry with Muzzin has locked him into the second pairing, a place that seemed that Dermott was being groomed for. The halt in moving Dermott up kept him locked in as the 3rd pairing LHD this season, and early in the year he was forced to platoon with @Mikko Lehtonen before he won the role, and later found himself replaced by Sandin, and found himself in a platooning situation with his former defensive partner @Zach Bogosian and then briefly @Ben Hutton. While this really only resulted in five healthy scratches throughout the regular season, the Leafs only played Travis Dermott in 3 games during the post season. Is this a telling tale of Dermott not being a part of the Leafs future or just the acknowledgement that Sandin was the hot hand heading into the playoffs and there is still nothing wrong with Dermott who is clearly a solid bottom pairing defender with middle pairing upside?
Perhaps the more telling thing about Dermott’s relationship with the Leafs, and in particular Sheldon Keefe/Dave Hakstol (this relationship will be an especially important one to consider) is the drop in his ice time last season. There really was no attempt to move Dermott up in the lineup from the 3rd pairing, and he played low third pairing minutes. Dermott averaged 13:13 ATOI last season, the lowest of his career. Even his rookie year he was averaging 16 minutes, and this is down four minutes from his ice time last season. Of course it was a better Leafs blueline. With bringing in Brodie, there isn’t a defenseman like Tyson Barrie that you are desperately trying to get off the ice as soon as the puck heads towards the Leafs zone. It’s also inline with what his frequent partner, Bogosian, was playing. He was over a minute lower in ATOI than Zach, but given that Rielly and Muzzin are both left side minute eaters, Dermott was bound to draw the short straw.
A lot of Dermott’s numbers can be attributed to usage and level of competition. He wasn’t drawing top line matchups, and was either matching against bottom six opposition or catching top six players in on the fly or long whistle situations, still what you want Dermott to do, he did. He had the team best xGA/60 of the regulars, same can be said of high danger corsi, and corsi in general. The goals against/60 is probably the biggest bone to pick, and while Dermott and Bogosian might not receive the most elite group of forwards to be on the ice with most of the time, the defensive responsibilities do fall on them, and they deliver with the same success that they did for taking away opportunities.
Looking at the situational usage, you can see where Dermott has the potential for more, but essentially his bad outcome luck seems to be holding him back. Against the top competition around the league Dermott has an unfortunately high number of goals against, even if he was consistent, and in fact a little better than Holl at reducing the opportunities, and that comes with Holl working with Muzzin as a partner.
Perhaps the biggest issue the Leafs seem to have with Dermott is his lack of a standout ability. He can penalty kill, but he’s not a standout penalty killer. He can be physical, but it is not an element of his game that he uses nearly enough. He can move the puck, but doesn’t seem to have the green light to do much more than safe breakout passes, and doesn’t often play in the situations that are about driving offense. While the talent seems to be there, the fact that Rasmus Sandin is available on the left side as an upgrade, and there is no guarantee that Dermott can transition to playing on his wrong side at the levels he’s performed so far, let alone take another step in his game.

So what do the Leafs do with him?

A couple of weeks ago Frank Seravalli reported that the Leafs are actively trying to move Dermott in advance of the expansion draft. This is probably the most telling information to go on when it comes to Dermott. While this occurred prior to the Kraken hiring Dave Hakstol there is a good chance that the Leafs knew that a Hakstol hiring was imminent, and knows that Hakstol would like to bring in one of the Leafs defensemen that he’s familiar with. This could very well be the Leafs having enough value on Dermott to know they don’t want to lose him for nothing, but aren’t willing to rock the boat enough in protecting him over Holl, who is five years older but has established his place in the Leafs roster.
I’d certainly hope that this move is being done with Dermott being treated as an asset and not just a find him a place where he can play type situation. The Leafs made moves like that for Josh Leivo, Mikko Lehtonen, and Alexander Barabanov, and in at least two of those situations a greater effort should have been made on getting a proper return instead of just finding them a new home. Keeping Dermott as a potential player to be selected by the Kraken might be more valuable than picking up C tier prospect or middle round pick, unless the plan is to shepherd Seattle towards selecting someone like Kerfoot which could help the Leafs from a salary cap perspective.
The other thing that hasn’t been touched on but needs to be considered is Dermott’s restricted free agent status. He is also arbitration eligible and there’s a very good chance that he finally wants to get some semblance of a payday. Dermott was a good team player last year and took a $875k qualifying offer to play for the Leafs, but with Evolving Hockey projecting that he could take a two year deal at $1.13M, he won’t be as cheap. That still seems like a hell of a price for Dermott, but there is probably some worry that arbitration could push that number significantly higher as there is no shortage of defensive overpayments that the Dermott camp could use as comparables in negotations. Still, I’d argue if he comes in at Holl’s price he’s still a bargain and not really someone the Leafs can easily replace unless you have total confidence in Rasmus Sandin putting it all together in his first full season.
While everything seems to be pointing towards Dermott having a new home next season, that still doesn’t sit right with me. Moving on from Dermott at a point when he’s entering his prime and able to take some responsibility away from some of the Leafs older defensemen like Holl and Muzzin seems risky. The up in the air status of @Morgan Rielly also needs to be factored in, as does the fact that there is no guarantees when it comes to what the Leafs have with Sandin and Liljegren.
The expansion draft is an absolute wrench in the Leafs plans. If it wasn’t happening it would be a no brainer that the Leafs would be trying to lock Dermott in for a cheap deal with term by now, but instead we’re planning on his departure. Personally, I’d protect Dermott and roll the dice on Holl instead. While the NHL has a fetish for RHD defensemen, I’d be willing to chance a soon to be 30 year old defenseman not being picked over the 25 year old who is ready for the prime of his career. Of course the Hakstol factor is one the Leafs know better than anyone else, and I’d expect their protection list and moves to reflect that.
Data sourced from Natural Stat Trick, Evolving Hockey, PuckIQ, and PuckPedia
Uncategorized
Recent articles from Jon Steitzer