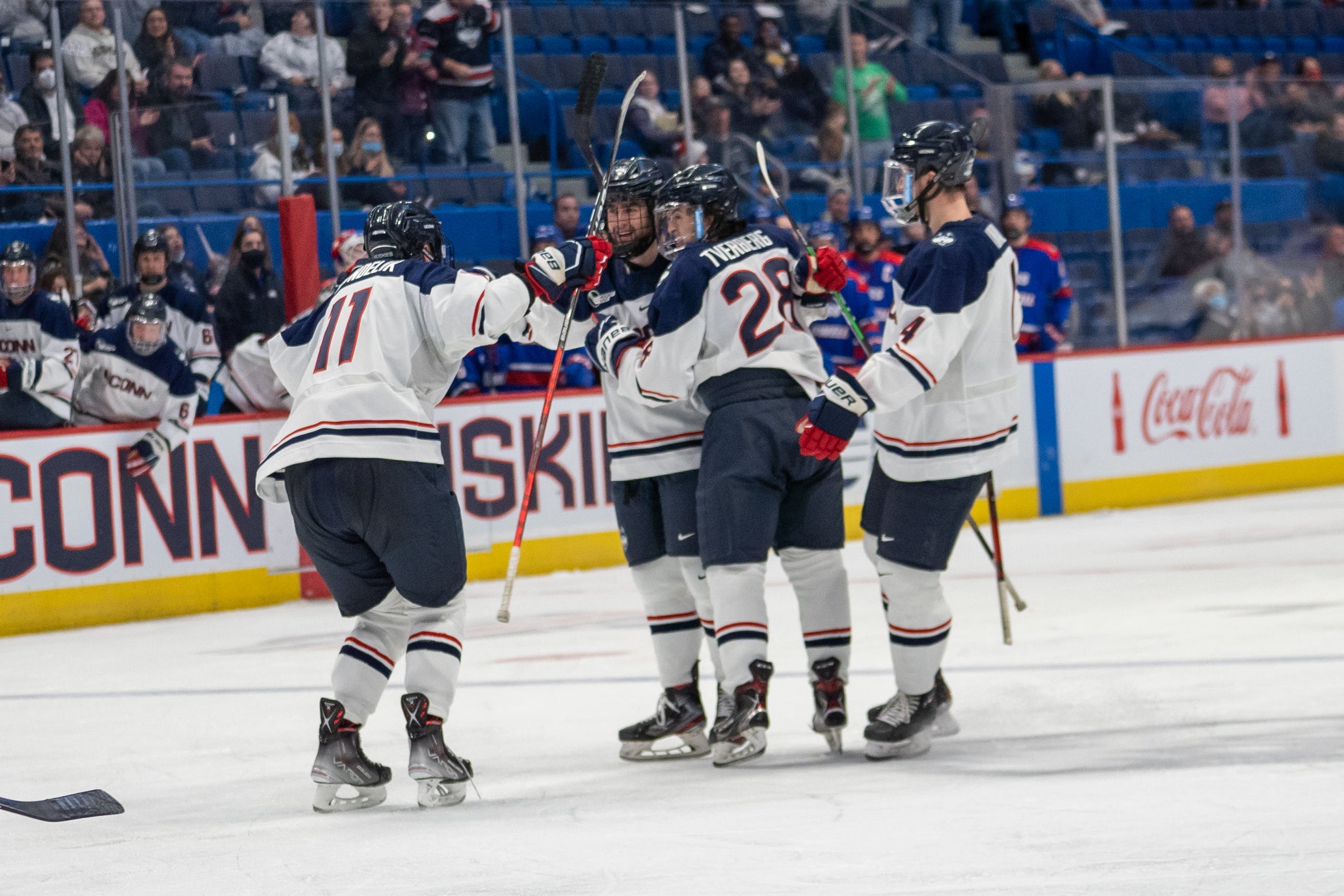 By Jon Steitzer
1 year ago
The Hobey Baker award is the most prestigious individual award in the NCAA. Every year there is a length process of creating a long list of nominees, and an initial round of voting takes place to get that list down to ten and the competition starts getting real.
Right now we’re still in the initial stages, and of the 77 (yes, 77) names on the list, there are two Leafs prospects in there. Ryan Tverberg of the University of Connecticut, and Nick Abruzzese of Harvard University.
Nick Abruzzese has had one hell of a week. The college junior started off by being named the ECAC Conference player of the week, and that was bested by being named to the US Olympic hockey team. After that the Hobey Baker long list probably seemed like a give, but it’s probably not an honour the 23 year old takes for granted.
Abruzzese has 21 points in 14 games this season, which is good for being 42nd in the league in scoring. Of course it’s the 14 games that makes that most impressive, and when you look at points per game, Nick’s 1.5ppg puts him as the top player in the country. That certainly makes him a strong contender for at least the next round of voting.
In the recently completed TLN midseason prospect rankings, Kyle Cushman said the following about the 5th ranked Abruzzese:

Since being drafted as a double overage prospect in 2019 by Toronto, Abruzzese has done nothing but score. Given his advanced age, he had to step into the NCAA and produce immediately, and that’s exactly what he’s done. A cerebral player, Abruzzese may not have the skating ability, but his use of deception and quick playmaking makes him a very interesting prospect for me. He likely won’t be a top-six NHL talent on his own, but his skill set could make him a strong complementary piece with the Leafs top stars in a couple of years.

Ryan Tverberg might not be as well known to Leafs fans, unless you’ve been reading Nick Richard and Kyle Cushman’s weekly Prospect Roundups regularly. There has been no shortage of love for the Connecticut sophomore.
Tverberg has struggled in his past five games with just one assist, but still has 17 points in 18 games, which still makes him one of the top offensive players in the country. He was one of the final cuts for the Canadian World Junior team, and perhaps that absence and disappointment of missing out is partially responsible for the recent drop in production, and he was sitting at 16 points in 13 games. Tverberg is presently tied for 36th in the NCAA for goals.
In his midseason rankings, Kyle Cushman ranked Tverberg as the Leafs 12th best prospect saying the following:

Tverberg is the biggest riser on this edition of the Leafs prospect rankings, and rightfully so. I’ve been a fan of his game since he join UConn in the second half of last season. His mix of speed, skill, and eagerness to drill someone through the boards made him arguably the most electric prospect in the organization. For Tverberg, the question was how long it would take him to adapt to the collegiate ranks coming from the OJHL. It’s a big jump to make and as a seventh-round pick with limited pedigree, he was going to have to earn every minute of ice-time he got. And boy has he ever.

A notable absence from the Hobey Baker list is Matthew Knies, but as a freshman I guess it’s understandable. I guess Knies will settle for being an Olympian. Knies’ undrafted linemate, Ben Meyers, is on the list and he will certainly be a name to keep an eye on once his hockey season comes to an end.
You can find the whole list of Hobey Baker candidates here, and vote for Abruzzese and Tverberg until March 6th. Shortly after that we’ll know who the final ten candidates are.
Data from College Hockey News
Uncategorized
Recent articles from Jon Steitzer