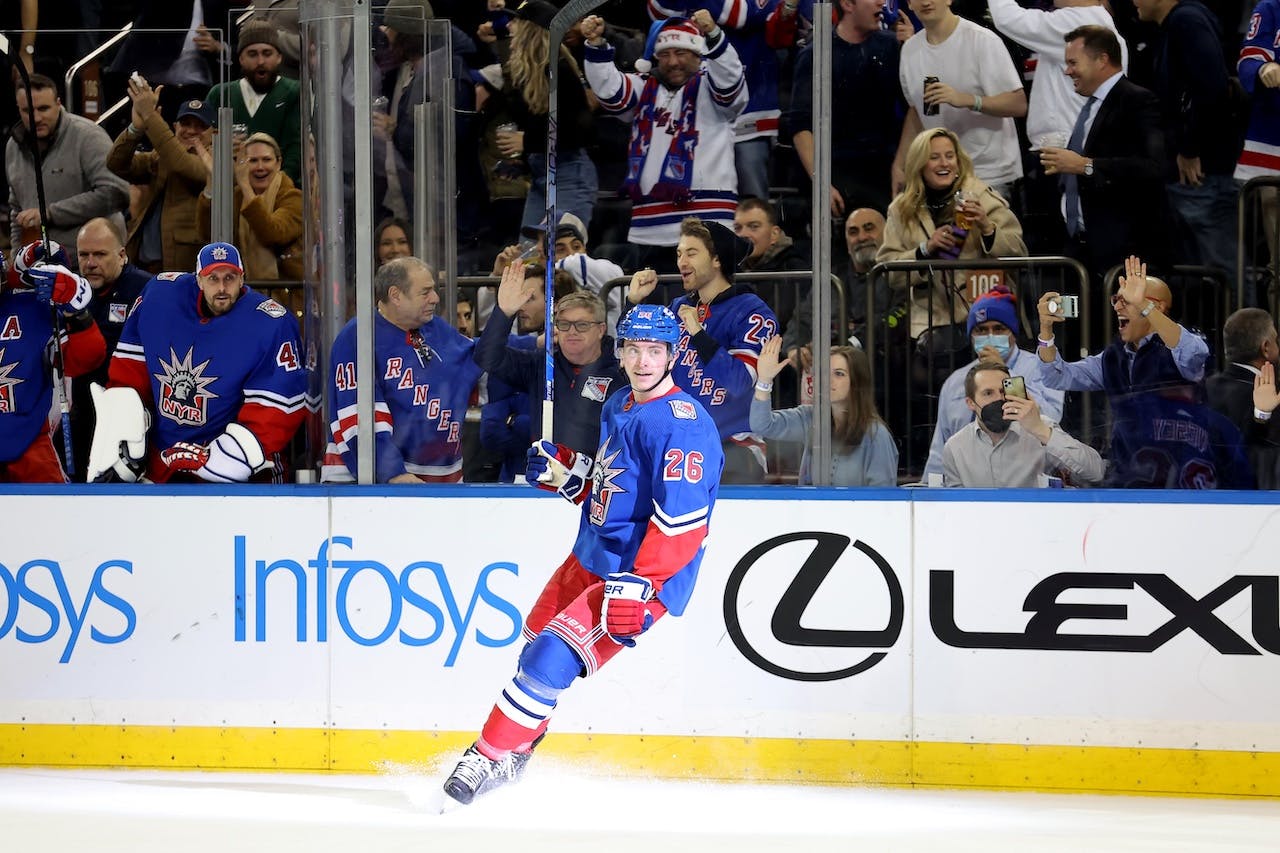 By Nick Alberga
1 month ago
Well, the duelling point streaks had to end eventually, right?
And coincidentally, it happened on the same night.
Former Leaf Jimmy Vesey scored twice – one of which was an empty netter – as the Rangers upended the Leafs 3-1 to snap Toronto’s incredible 15 game point streak.
That tweet says it all; what an unbelievable run for this team. Speaking of which, two point streaks may have ended, but another continued. With his first period tally, Michael Bunting extended his point streak to 10 games. Suddenly, we have a new narrative to document.
Filip Chytil had the other goal for the Rangers in the defensive battle. Igor Shesterkin made 22 stops for his fifth consecutive victory; Matt Murray turned aside 18 in the loss to fall to 7-2-2 on the season.
The Leafs went 0-for-3 on the power play.
Muzzy’s Muzings:
HATS OFF
Sometimes all you can do is tip your cap, the Rangers were just a bit better on Thursday night. That said, what an impeccable run for Mitch Marner and the Maple Leafs as a whole. For my money, both point streaks were equally as impressive. It’s hard to have it every night in this league and this game was a perfect illustration of that. In general, there are so many positives to grab from this team right now, it’s amazing to see. Hats off to everyone; that was a lot of fun. It’s time for No. 58 to carry the torch.
MICHAEL BUNTING
You can’t stop Michael Bunting, you can only hope to contain him —at least right now. The 27-year-old winger, who’s in the midst of a contract year, did his best Marner impression by extending his career-high point streak to 10 games with his first period goal. He’s now scored in three straight outings. Furthermore, since November 25th, the Scarborough native has tallied three goals and 12 points. All things being equal, Bunting could be playing his best hockey as a Maple Leaf right now. What a value buy by Kyle Dubas!
MISSIN’ ZIP
Undeniably, you’re not going to have it every night, and Thursday night on Broadway showed just that. From puck drop, the Leafs seemed a bit off. Simply put, they lacked the crispness that we’ve seen time and time again lately. It happens. All in all, there’s not much you can do, honestly. That’s hockey —onto the next one.
Highlight of the Night:
WHAT’S NEXT?
The Leafs will be back in action on Saturday night when Ilya Samsonov makes his highly-anticipated return to D.C. On October 13th in Toronto, the Leafs edged the Capitals 3-2 in Toronto.
PSA: Don’t forget to check out ‘Leafs Morning Take’ with yours truly, Nick Alberga, and former Leaf Jay Rosehill every weekday morning LIVE at 11 a.m. ET on The Nation Network YouTube page.
Editorials
News
Recent articles from Nick Alberga