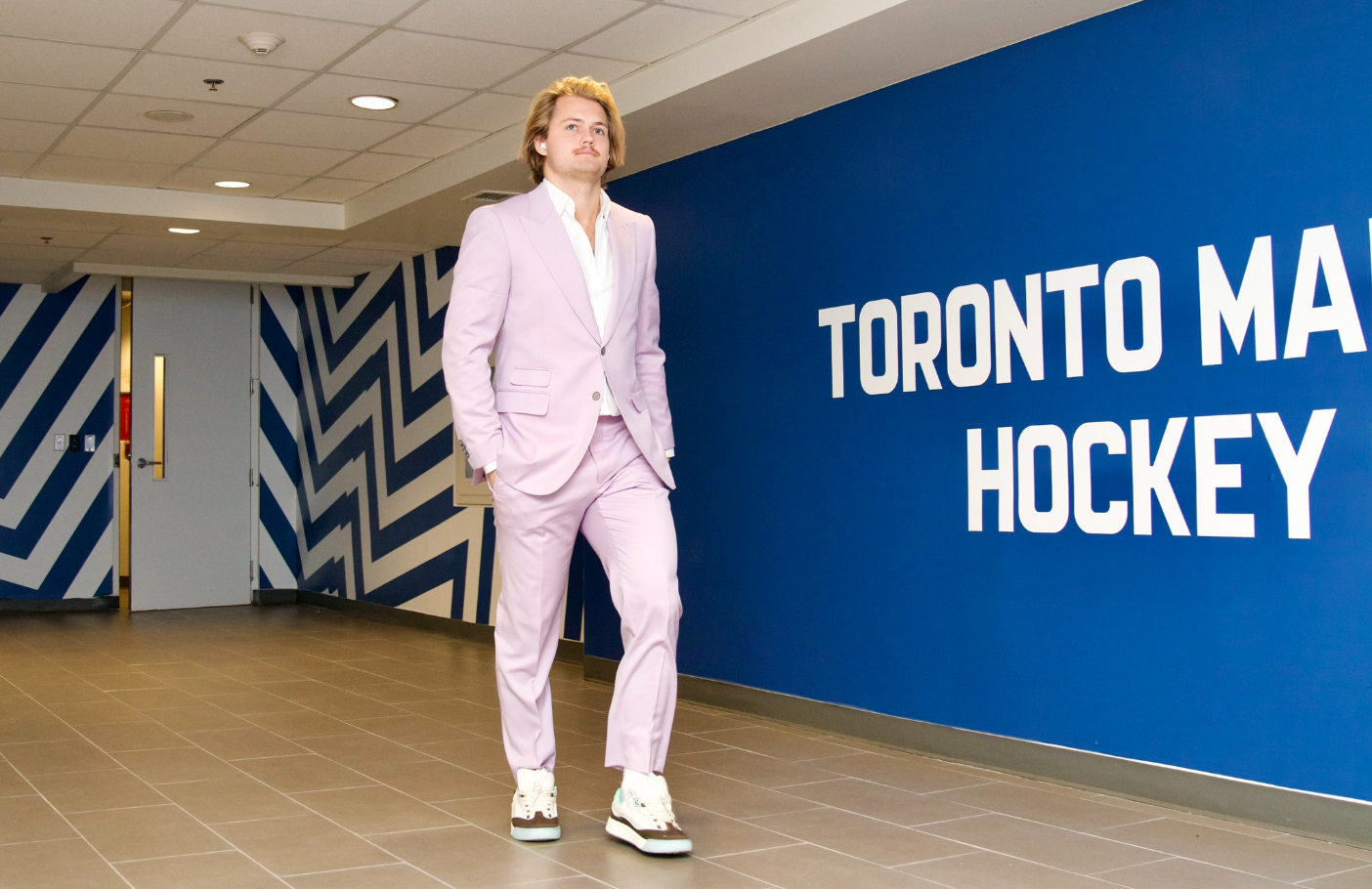 By Nick Barden
10 days ago
Welcome back to week six of the Maple Leafs Gameday Fit Power Rankings!
This week was an interesting one as Toronto had two home games which saw players’ fits posted to Instagram and Twitter. So with that being said, there was a lot more than usual to comb through and decide who gets into this week’s rankings.
Some fits were very creative, others weren’t but they made it into the top-5 anyways. The reason being: those players, specifically, could pull it off.
I’d say this is the best week for Maple Leafs fashion that we’ve gotten this season. So, buckle up, get your coffee, and enjoy the rankings!

I know I’ve said multiple times throughout this series that I’m not the biggest fan of plain suits, but somehow, Giordano can just pull it off.
It’s safe to say he can pull anything off at this point, right?
The thick tie and the dark (…maybe green) plaid make this suit come to life. Everything flows very nicely from top to bottom. There’s not much to say aside from that, so Giordano gets fifth spot.

Welcome to the power rankings, Calle!
This maroon suit is very nice, and when you match them with Chelsea boots, it’s chefs kiss. I’m not too sure what this type of suit is called, but William Nylander wore it a few weeks ago and I was a huge fan of it.
I’ll say the same about this one. The people from Sweden understand fashion maybe better than anyone else.

This looks like the most comfortable suit, ever.
There’s the longer suit jacket, the plaid pants, and the unbuttoned shirt that all flow together in a unique way. I really, really like this suit. I also like the hat.
One thing I’m not the biggest fan of, though, is the missing belt. When someone isn’t wearing a belt with a suit, there’s just something about it that makes it look weird.
It’s different, but a suit just makes sense with a belt. I don’t know, but either way, this is still a very nice fit.

The scarf — must I say anything else?
This is why we call Matthews one of the most stylish players in all of the NHL. He’s not afraid to step outside of the box, even when there’s a ‘business casual’ dress code.
I really appreciate his ability to throw on different shoes with a suit because you don’t see that often. Especially with high-tops. But aside from that, the blue plaid looks very nice, the hat ties this suit together, and the scarf just wins it for Matthews.
The best part about this fit (aside from the scarf) is the matching bag he has with his shoes. Just 10/10, man. He would’ve been number one if it wasn’t for who’s up next.

When I saw this photo for the first time, I just laughed. Not because of the pink coloured suit (I really like it), but because Nylander is the only player on the Maple Leafs who can pull this fit off.
After walking into Scotiabank Arena with this suit, the 26-year-old went and scored two goals. It’s safe to say this suit wins at everything.
We really need more of this from Nylander.
Now, this is the third time this season where the 26-year-old has finished atop the Maple Leafs Gameday Fit Power Rankings. I don’t have a prize, but I think we all can show appreciation to Nylander and his suit game because it’s quite unbelievable.
Editorials
Recent articles from Nick Barden