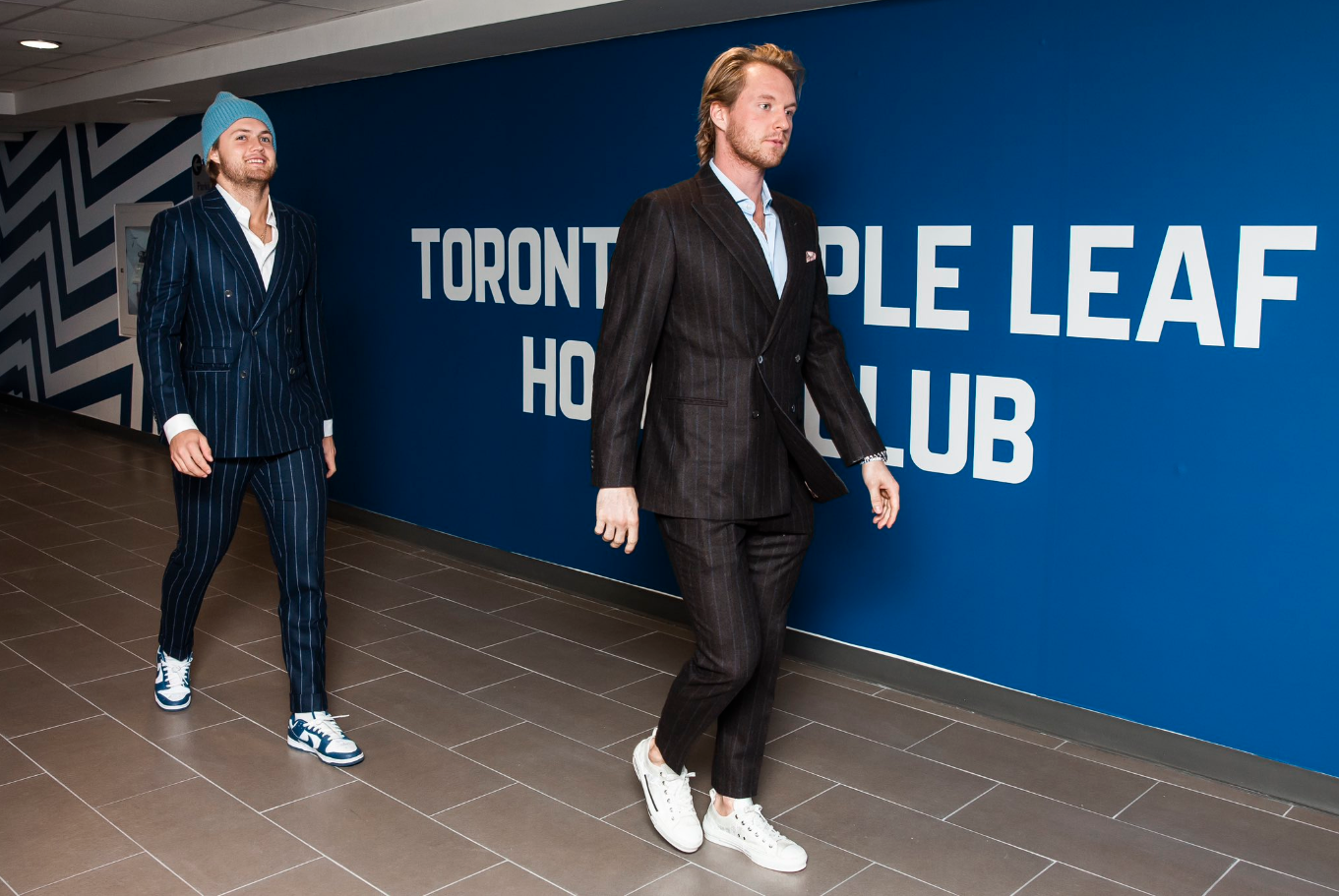 By Nick Barden
3 months ago
One of my favourite things about hockey, and all sports really, is seeing what the athletes wear walking into the arena.
Whichever sport it is — hockey, basketball, football, or baseball — players like to show their personality through what they drape themselves in before games.
Hockey, in particular, is no fun when it comes to fashion. It’s a sport where kids are told at a young age to wear suits to their games and they do that all the way to the NHL level, if they make it there.
It’s boring. Unentertaining. Monotonous. Dull. I could go on.
There are some NHL teams that have loosened their dress code a little bit, but for the most part each team still wants their players to enter the arena looking ready for business.
While it’s understandable, I still hate it. I love fun, and dressing different is fun.
Toronto has settled for business casual, which means still wearing a suit. However, they are allowing the players to spice things up a little bit. And as you may know, there are plenty of guys on the Maple Leafs who want to show off their gameday drip.
So, I thought I’d write about it. Maybe it’ll be a weekly series, maybe it won’t. It all depends on if the Maple Leafs continue to post photos of their players as they enter the arena.
The title explains it all. Gameday Fit Power Rankings. I hope you enjoy them!

These two both seem like great guys, but their fashion sense just isn’t there at the moment.
Bunting could make this look really good if he went no tie and undid the top button. If he were to do that, he should also go no socks and switch his shoes to loafers. Also, he’s got to take the phone out of his front pocket. That’s a no-no in my books.
Kerfoot looks like he’s off to a wedding dating back to 2010. I love the suit, but the tie looks like one he took out of my dad’s tie collection. I’d say he needs to change the tie and go no socks and loafers. Those just seem to work with everybody.

The first of three Swedes in the top five, Engvall is entering Scotiabank Arena full of style.
A very nice clean look. The blue-striped suit looks very good alongside his blue phone case. Hopefully he meant to do that. I would’ve liked to see him go with no socks while wearing white shoes, but that’s okay because it still works.
The Louis Vuitton wallet is also great touch and it helps round out the fit.

The Europeans just understand style.
This look by Sandin is just so simple and it works perfectly. White shoes with either no socks, or low ankle socks. Check. A clean suit with an unbuttoned shirt. Check.
I think Sandin will find himself closer to number one if this series continues throughout the next few weeks.

Marner always seems to have interesting suits he wears while walking into the arena.
This one, with the hat, the blue suit, and the mahogany Chelsea boots — everything comes together seemingly well making it a very nice look. Marner always rocks the hat, and I have to say, it really works for him.
He’ll take home third spot this week.

This one honestly came as a shocker to me, but I had no idea Giordano had this much style.
Part of me not knowing probably comes from the fact that I’ve never seen what he’s worn into the arena before. Now I have and I’m very impressed.
We’re so used to seeing players like John Tavares and Jason Spezza (when he was a player) dress boringly. Giordano, though, is coming in looking good and is taking second spot in this week’s rankings.

If there’s anyone who can show off their sense of style, it has to be Willy Styles himself.
From top to bottom, Nylander makes the fit work immaculately. The beanie makes sense on a chilly October evening. Pairing that with a slick dark striped suit and a shirt with the top two buttons undone.
And he tops it all off with some nice blue Nike Dunk Lows. If I knew the word ‘beautiful’ in Swedish, I would say it’s that.
Vacker.
*Note: All photos used in this article are courtesy of the Maple Leafs Twitter and Instagram accounts.
Editorials
Recent articles from Nick Barden