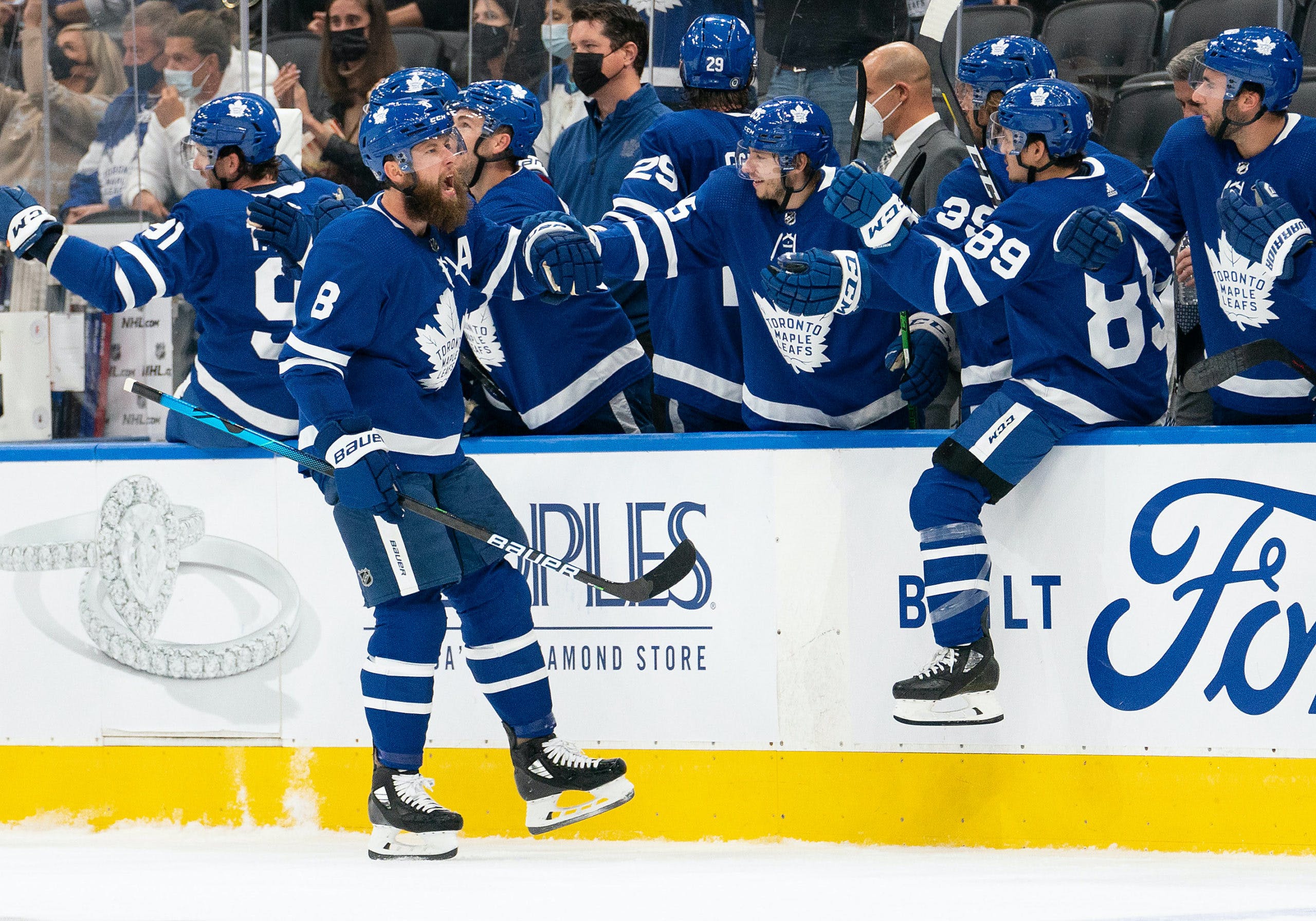 By Jon Steitzer
1 year ago
On Saturday night the Leafs had the luxury of icing a near full lineup, which seems like nothing short of a miracle given the current COVID situation. Jake Muzzin didn’t quite make the cut come game time and Timothy Liljegren remains in protocol until the Oilers game (assuming he’s symptom free). On the forward side of things the Leafs even managed to have Nick Ritchie in the pressbox, certainly a sign that the forward group is ready to roll.
Health is good, but in a salary cap era, there is a minor hiccup. That hiccup is the Leafs can’t afford to keep everyone.

A fully healthy Leafs lineup with Timothy Liljegren out of COVID protocol equals just over $81M, which it’s really a problem until you factor in the retained salary of Phil Kessel. That retained salary pushes Toronto to a $783k overage, and forces some decisions to be made.
The easy short term decision is what we’ll likely see to start, and that will be Toronto taking advantage of the waiver exempt status of both Timothy Liljegren and Rasmus Sandin. Ideally both of them would be in the lineup. Ideally both would be on a pairing together, but it seems in order to facilitate a move later on that doesn’t result in the Leafs losing an asset for nothing, the young blueliners will have to take one for the team and rotate in and out. Likely something they won’t forget when their contracts come up this summer.
If the Leafs are wanting to keep both their young defensemen in the lineup the other option is to consider trading or waiving one of the Leafs depth forwards. We’ll scrub trades from consideration here, as there is no reason to believe that anything is imminent, and if Toronto is going that route the return on the player would be underwhelming at this point to say the least.
So let’s talk waivers. When it comes to waivers there really are two options that standout at this point, and they are Pierre Engvall and Nick Ritchie.
On one hand you have Pierre Engvall, who is cheaper, younger, can play center, and has a contract that expires this season as a RFA. Arguably he has done more than the Leafs organization has expected from him this year, but arguably he is not a player the organization is overly attached to and they might see more value in unlocking what Ritchie brings to the table. If the Leafs put Engvall out there, he would very likely be claimed.
On the other hand you have Nick Ritchie. Ritchie has struggled throughout the year as he adjusts to the Leafs. He was gifted a first line spot to start the year and now he’s struggling to hold onto the fourth line gig with a healthy forward group. He hits, and on the Leafs that is not an unimportant attribute, and despite his scratch last game he was playing better of late. He carries a $2.5M cap hit for this season and next, and that cap hit would likely make clearing waivers a lot easier for him, but with a trade off. Does Ritchie, who has played like he has lacked confidence all year, suffer a setback and slide further into a funk as a result of the Leafs putting him out to the league for free? I’m not going to make any additional assumptions on the psychology of a player, but admittedly right or wrong the thought entered my head. There’s also the possibility the Leafs could be exploring a trade for Ritchie, and this would certainly tank that value.
For now the short term plan is the reality, it’s just a matter of how long the Leafs will accept that reality. There is also the fact that injuries will occur again, and despite the high number of Leafs that have already been in COVID protocol, it’s also likely we haven’t seen the last of that either. So for now it’s one of Liljegren or Sandin, but not both and the completely optimal lineup card will have to wait. Changes will come, but with a later trade deadline, there’s no reason to expect Kyle Dubas to rush anything, especially in a season where depth is king.
Uncategorized
Recent articles from Jon Steitzer