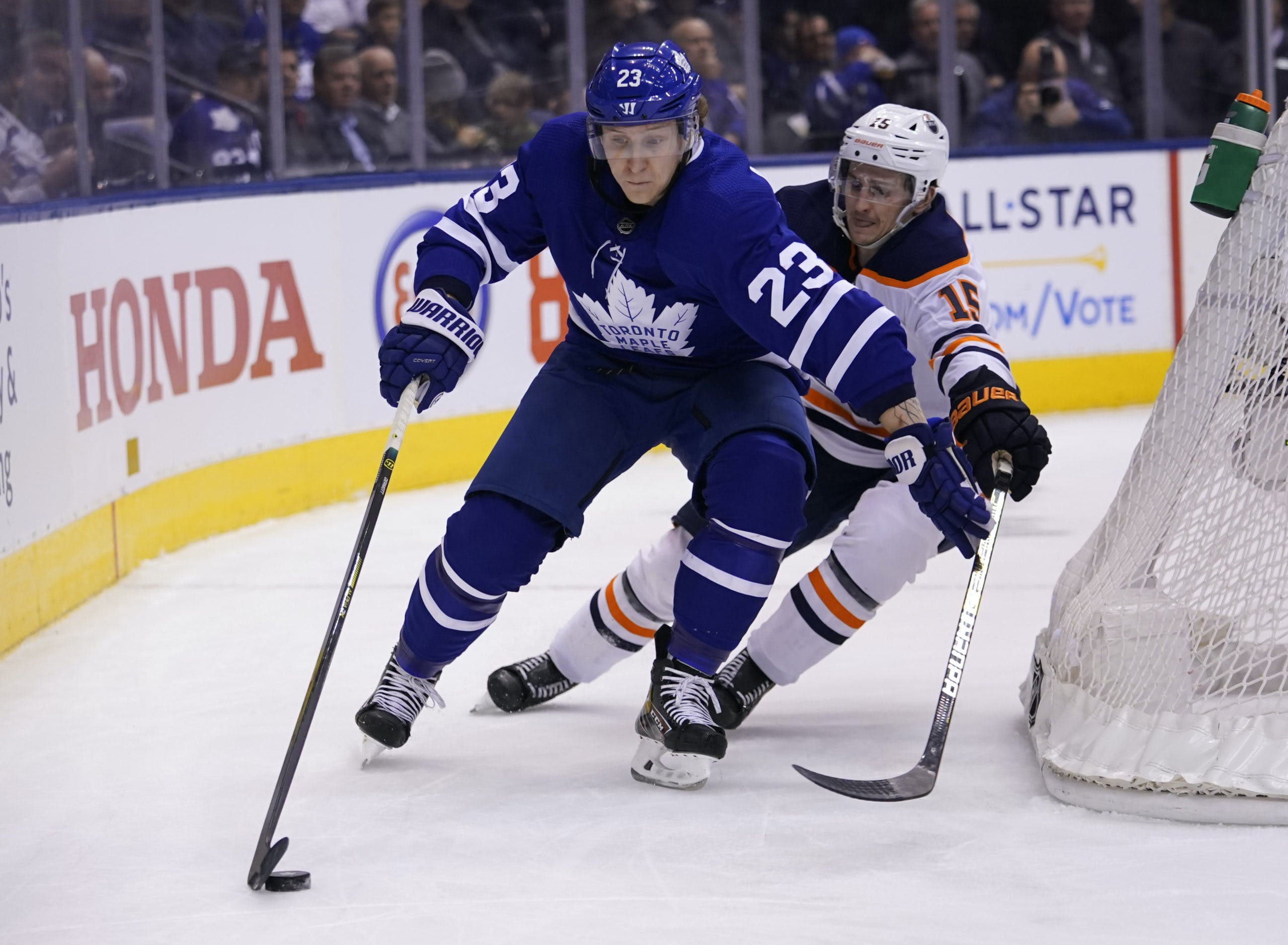 Photo credit: © John E. Sokolowski-USA TODAY Sports
By Jon Steitzer
1 year ago
Comments
Second day of the on ice portion of training camp is now complete, and we are now ready to anticipate the first preseason game tomorrow. Maybe anticipate is the wrong word in a year when so many Leafs fans are already planning on treating the regular season like the preseason, but anyway, the point is (for good or bad) tomorrow we get to watch Leafs hockey again, even if it’s a Leafs/Marlies/etc. grab bag making up the lineup card.
As we did with Day one, we’ve got a few noteworthy things to takeaway from the day, and we’ll start with the line rushes:

The first thing to takeaway is that they are pretty much the same. The return of @Wayne Simmonds meant that he needed to be inserted somewhere, but other than Simmonds joining the Engvall and Semyonov line, there isn’t a whole lot to see here.
Presumably one of these two groups will make up the lineup against Montreal tomorrow night, and as much as I’d say I’m more excited to see some of the PTO folks in Group 2, the fact that one is before two leads me to believe Group 1 could be the first ones up.

Some notes and quotes:

Travis Dermott on playing the right side to start out at camp.

A new defensive coach is a nice fresh start for @Travis Dermott, and he couldn’t pick a better mentor than Brodie to learn how to play the right side as a left handed shot. It would be nice to see Dermott get that level of comfort and to be able to play with @Morgan Rielly this season as they’ve been paired because Sandin and Brodie is a wonderful idea as well.
Advertisement
Ad
Advertisement
Ad

New #Leafs forward David Kampf on his focus this season: “My goal is to shut down the best players in the NHL.”

Well that’s great when they play the Lightning, but Kampf knows he has to still show up against the Sens, Sabres, and Red Wings too, right? I kid, I kid. Really, I’m just really interested to see how things shake out here as he could be the most interesting acquisition of the summer even if he was initially panned. Remember a lot of people weren’t big on the Bogosian acquisition last year either and he won a lot of people over.

Robertson on the left-wing battle: "Competition never hurt anyone. This organization has taught me that nothing's given to you, no matter where you are and what you've done." #Leafs

This is a real uphill battle for Nick Robertson, so I hope he doesn’t get too beat down if he doesn’t make the Leafs roster out of camp. The fact that he doesn’t require waivers will really work against him, as does the fact that he also has to compete against Ho-Sang and Gusev in addition to Ritchie, Mikheyev, and Bunting for a job, not to mention Kerfoot, Simmonds, Engvall, and you know what, I really hope he’s okay with starting on the Marlies.
Advertisement
Ad
Advertisement
Ad

Marner on how new coach Spencer Carbery will help the power play: He's got a creative mind and he's willing to try new things and so is our power play.

He's already talked to us a bit about what his idea is, and I guess you guys will see.

It looks like Marner will now be playing the bumper role, and Nylander will be taking up residency on the half wall. Potentially there is an opportunity for Marner to be more creative with this change and Nylander provides a stronger shooting option on royal roads passes or when crashing the net on a rebound. In theory. As long as there is more room for creativity, the powerplay should improve.

I know just from the past that he's a guy that isn't afraid to throw his body around. He brings a lot of excitement to our team and another big body that is not afraid to be around that net and put some greasy goals in.

Finally, that has to be comfort food for a lot of people who have been asking for this for years. It will be interesting to see what it looks like on the ice for this iteration of the Leafs.