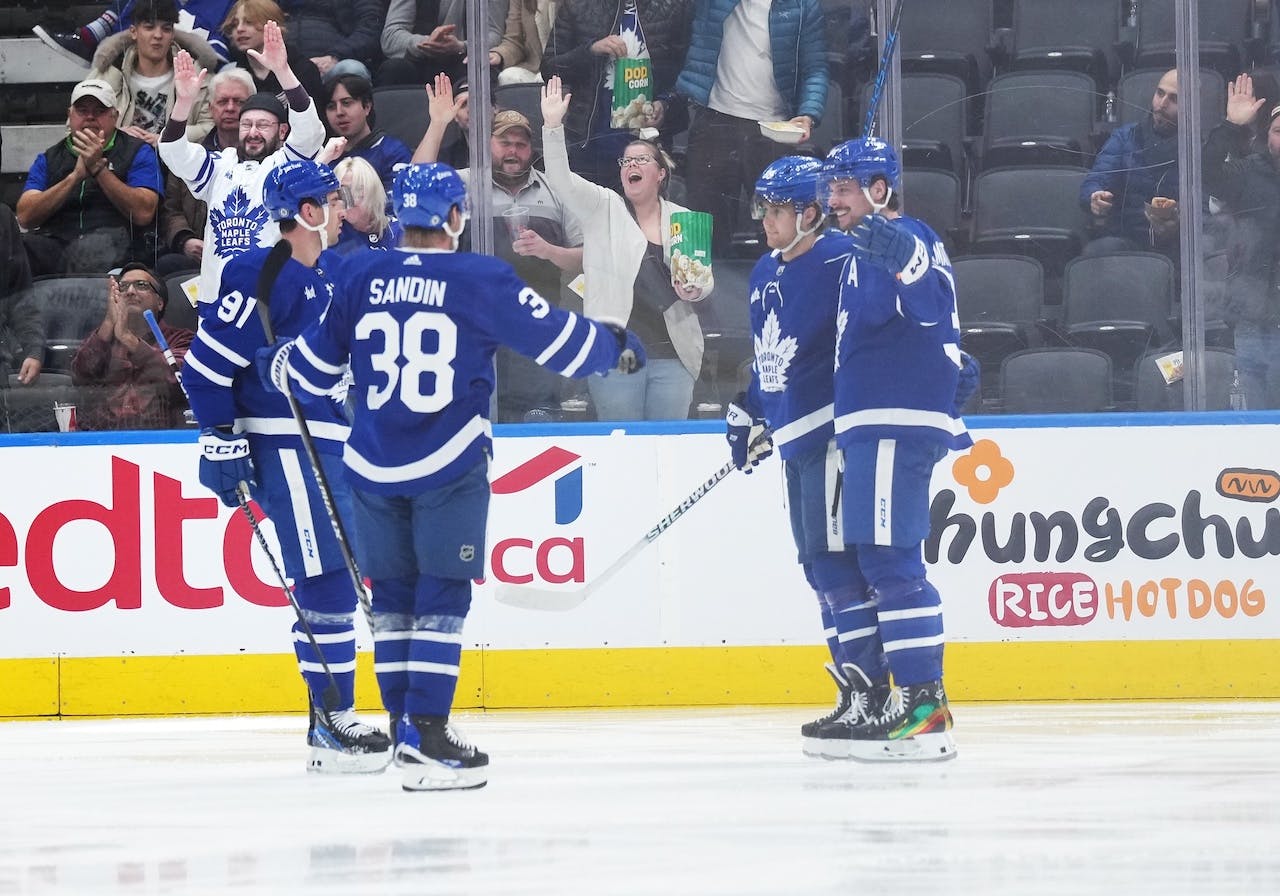 Photo credit: Nick Turchiaro-USA TODAY Sports
By Nick Alberga
1 month ago
Comments
What a dominant performance.
Michael Bunting scored his fourth goal in the past five games and Auston Matthews’ 17th of the year stood as the game winner as the Leafs snapped Tampa’s five game win streak with an impressive 4-1 victory.

Toronto, who improved to 20-7-6 overall, is now 1-0-1 against Tampa this season and have picked up three of a possible four points. Additionally, they’re now five points up on the Bolts for second in the Atlantic Division. Yes, it’s important to add that the Lightning do still have two games in hand on them.
Let’s be honest, the only reason this game was close was because of one man: Andrei Vasilevskiy. The future Hall-of-Famer made 36 stops as Toronto outshot Tampa 40-19 on the night. Furthermore, it was a 2-1 game until late when the Leafs tacked on a pair of empty netters via Pierre Engvall and William Nylander.
Advertisement
Ad
Advertisement
Ad

Calle Jarnkrok notched an assist in his return to the lineup after missing seven games with a groin injury.
Meantime, Matt Murray made 18 stops to improve to 8-2-2. By the way, the Leafs extended their home point streak to nine games. Their last regulation loss at Scotiabank Arena came way back when on November 11th against the Pittsburgh Penguins.
MUZZY’S MUZINGS:
BETTER START SET THE TONE
After two rocky first periods against the Rangers and Capitals, the Leafs were ready to go against Tampa. Truthfully, the biggest difference from the past two games was their puck management. They were quick, efficient, and smart, and most importantly, they took the game to the Lightning from the get-go. Furthermore, they limited their turnovers, something that plagued them big time against New York and Washington. Additionally, the cherry on top was scoring first. What a shot by Bunting! The numbers don’t lie; Toronto is a significantly better team when they play with the lead (13-3-3 when scoring first). Well done!
Advertisement
Ad
Advertisement
Ad
DAN KELLY/MICHAEL BUNTING?
Seriously, what the hell was that?

Yes, obviously, my first instinct was to laugh. After that, I started to wonder if Kelly went too far with his forcefulness. Bunting was off balance a bit, but there’s no need for an official to be that physical with a player, especially in a scenario like that one when they’re merely just trying to break up a skirmish. More times than not, those don’t go anywhere —just let it play out next time. Curious to see if anything further comes of that situation..who knows.
BUNT MAN GETS PAID
Personally, I’m at a point where I think the Leafs should do everything possible to try and re-sign Michael Bunting. And I wouldn’t wait; do it now. In general, that Bunting-Matthews-Nylander trio has been fantastic lately. As has been the case over the past few weeks, Bunting was around everything on Tuesday night; he’s been extremely noticeable. All in all, I love what he brings to the table. After losing Hyman, it would stink to lose another local product who plays with a bit of bite. We’ll see what happens.
Advertisement
Ad
Advertisement
Ad
SANDIN INJURY
Another game, another defender down for the Maple Leafs. Lather, rinse, repeat. Honestly, this is getting ridiculous. Sandin left the game in the second period with an apparent neck injury. Hopefully it’s nothing serious, because he’s looked really good lately, specifically alongside Timothy Liljegren. As a unit, they’ve really come into their own this season and finally look like full-time NHLers. At any rate, next man up, right? Despite all the injuries on the back end, Toronto hasn’t skipped a beat. It truly is remarkable. In some positive news, it sounds like Morgan Rielly is getting close to returning, so that’s good at least.
HIGHLIGHT OF THE NIGHT:

WHAT’S NEXT?
In their final outing before a four-day holiday break, the Leafs will host the Philadelphia Flyers on Thursday afternoon in the annual Next Gen game. That will be the second of three between the two squads this season. Back on November 2nd also in Toronto, the Leafs drew first blood in the season series with a 5-2 victory.
Advertisement
Ad
Advertisement
Ad