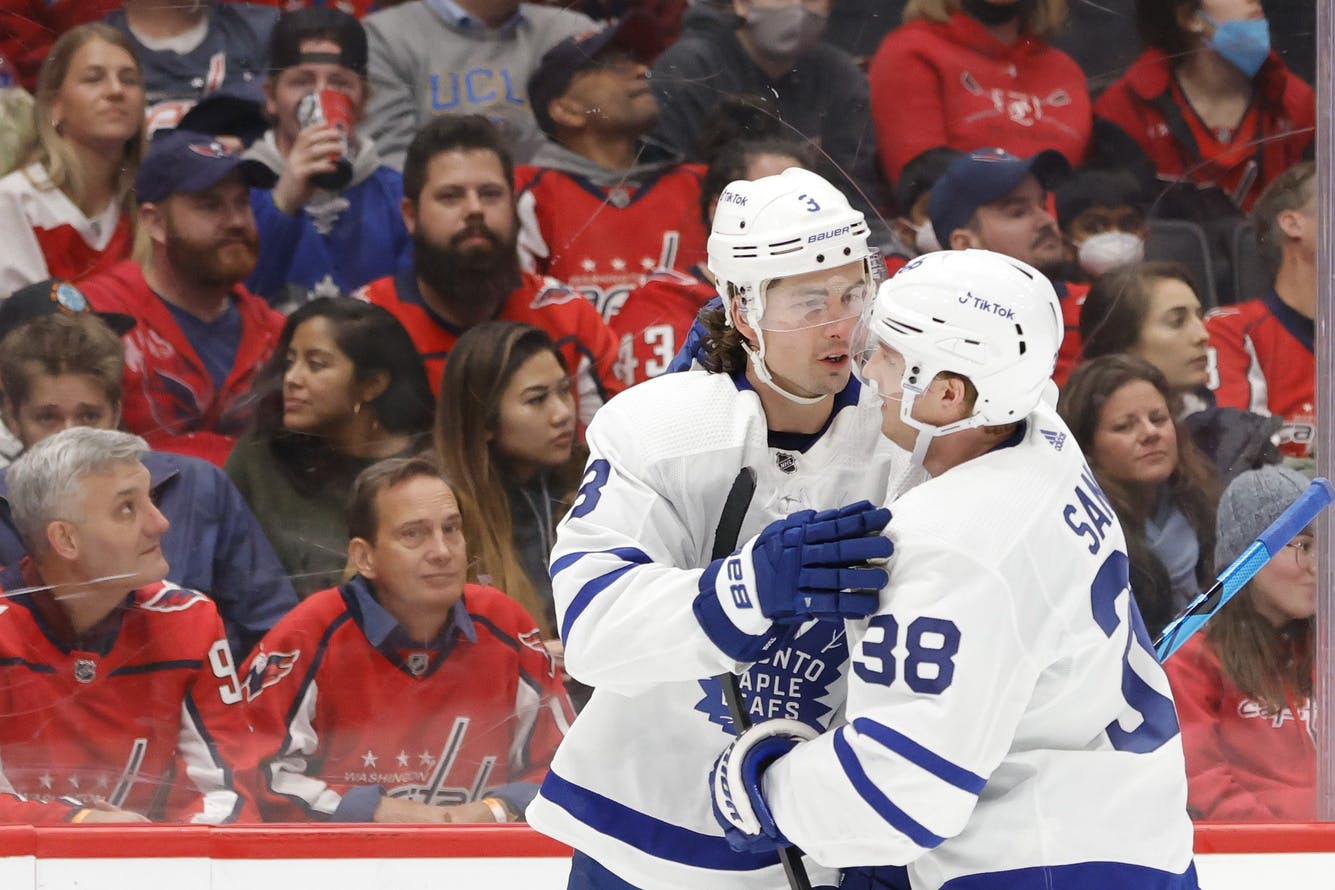 Photo credit: © Geoff Burke-USA TODAY Sports
By Jon Steitzer
4 months ago
Comments
The Leafs are in an interesting situation thanks to a number of camp injuries. They are definitely in a situation where having Rasmus Sandin join the Leafs would greatly improve their roster depth and help us all feel better about the team heading into October, but thanks to those injuries not being long term Toronto is in an even greater cap crunch that will make getting Sandin under contract even more of a challenge.
When it comes to all reports on the Sandin contract the deals that seem to be coming up are either one or two year deals. Toronto understandably doesn’t want to go too far from what was given to Liljegren on a two year deal, so perhaps a one year deal is the best compromise. I asked the TLN contributors what their thoughts were on the questions: “What do you feel is a reasonable comprise contract and are you at the point where you think exploring trade options is reasonable?” Here are their responses:

Let’s put this in no uncertain terms: the Leafs literally cannot afford for this negotiation to go beyond the start of the regular season, at that point any contract would get pro-rated and quickly push the cap hit of whatever the agreed-upon number is to a point where the team has to spend assets and deal away a player or two to make room for a young defenceman who, despite being hoisted on a pedestal, along with Liljegren, as the future of the team’s blueline, has not proven anything yet. $1.5 million on a 2-year deal is almost an overpay for a kid who has not yet played a full season in the NHL, but if it’ll bring the contract drama to a close, get it done before the calendar rolls over onto October so Sandin can be ready to jump into game action in time for the season opener.

Sandin is well within his rights to push for the highest value possible, as are all players. However, he has quite a small sample size at 88 regular season games and can’t expect to earn much more than fellow teammate Timothy Liljegren. $1.5 million for two years is a reasonable amount that he should be snapping up at the first opportunity. It gives him enough time to prove he’s deserving of both a bigger role on the team and a higher value and he will still be young enough to earn more as his career progresses. Other comparables around the league may suggest he might get that, but he has to realize that he won’t get much more on another team and should get a deal with the Leafs done ASAP.

The most reasonable comparable contract out there for Sandin right now is his teammate Timothy Liljegren’s two-year, $1.4 million deal. But the Leafs have already offered an identical deal to Sandin and his camp, which they declined. Clearly, Sandin and his agent believe that they are more valuable than Liljegren, but with only 88 regular season NHL games under his belt, it doesn’t seem like Sandin has a whole lot to base that off of. If Sandin does want to make more than Liljegren, the best deal for him seems like it would be a one-year deal, at under a million dollars, giving Sandin a one-year chance to prove that he is a more valuable player than Liljegren. With the Leafs deep at left defence, they can afford to let Sandin sit out, but Sandin can’t afford to miss training camp time and come into the season rusty. With the Leafs holding all the leverage in this situation, I can’t see a scenario where they should start to explore trading Sandin unless negotiations go way off the rails before the December 1st deadline.

Toronto has a plethora of lefties on the blueline, and yet still seems light at the back going into this season. Liljegren’s injury should not be overlooked, that’s a major loss. Justin Holl is currently the only right handed shot on the blue line, and there are health questions yet again with Jake Muzzin. Rasmus Sandin should be salivating while looking at the current depth chart. Jordie Benn and Victor Mete have suddenly been thrust into bottom pair scenarios, when many thought they would be press box/AHL bound to start the year. The contract offered to Sandin’s camp is reasonable given his small sample size in the NHL. Kyle Dubas and his staff should always be looking at exploring trade options, particularly when in win-now mode, but I foresee this contract being signed sooner rather than later, probably to the tune of $1.5M x 2 year, or thereabouts. Every day that passes are more reps that Sandin misses out on, and it’s an arduous path joining up halfway (cough cough William Nylander). I don’t believe Sandin can afford to hold out too long, and this should get resolved sometime in the near future.

Sandin still has plenty of upside but he hasn’t done nearly enough to be earning over 2M per season.
Sean Durzi and Timothy Liljegren are good comparables at 1.7M and 1.4M and I’d argue Sandin deserves a cheaper contract than both of them.
He has barely played more than one full season and has yet to live up to the hype of being a first round draft pick. With the Leafs depth at LD they shouldn’t offer him more than Liljegren.
Had he accepted a deal at 1.4M earlier this summer he would be in a great position to receive a massive raise in a couple of years. Now it seems his days in Toronto are numbered and he is at risk of wasting this season.

Advertisement
Ad
Advertisement
Ad
Honestly, the Sandin situation seems to be going exactly as we all knew it would the second we looked up that Lewis Gross was his agent, and the Liljegren deal was seemingly off the table. The part that bugs me is that this seems like it’s setting Sandin back a bit in his career, one that already has been limited by injuries. The idea of Kyle Dubas and Lewis Gross negotiating Sandin and Nylander contracts for the next few summers is great for our site as we could use the content, but is still an exhausting thing to watch play out. If anyone is calling on Sandin, I hope that Dubas is listening, but I certainly wouldn’t be shopping him as he’s still going to be priced a bit better or have more upside than any potential replacement.
When it comes to the actual negotiations I think it’s at the point where a $1M, 1 year deal should be what everyone is looking at compromise-wise, but don’t doubt that Sandin’s camp is pushing for the $1.4M for one year. I can also appreciate the stance of “I don’t care how much cap space you have, you pay my client what he’s worth” point of view, but it’s also safe to say the value they are placing on Sandin is skewed. The point of the short term deal is that Toronto shouldn’t have to pay for potential and Gross is still trying to sneak some potential value in there.
Advertisement
Ad
Advertisement
Ad
While I hope I’m wrong because it’s a definite setback for Sandin, and certainly doesn’t help the Leafs, we should prepare to wait to December 1st to know what is happening here. After all, we haven’t even gotten to the working out with clubs in Europe stage of negotiations.
More from TheLeafsNation.com: