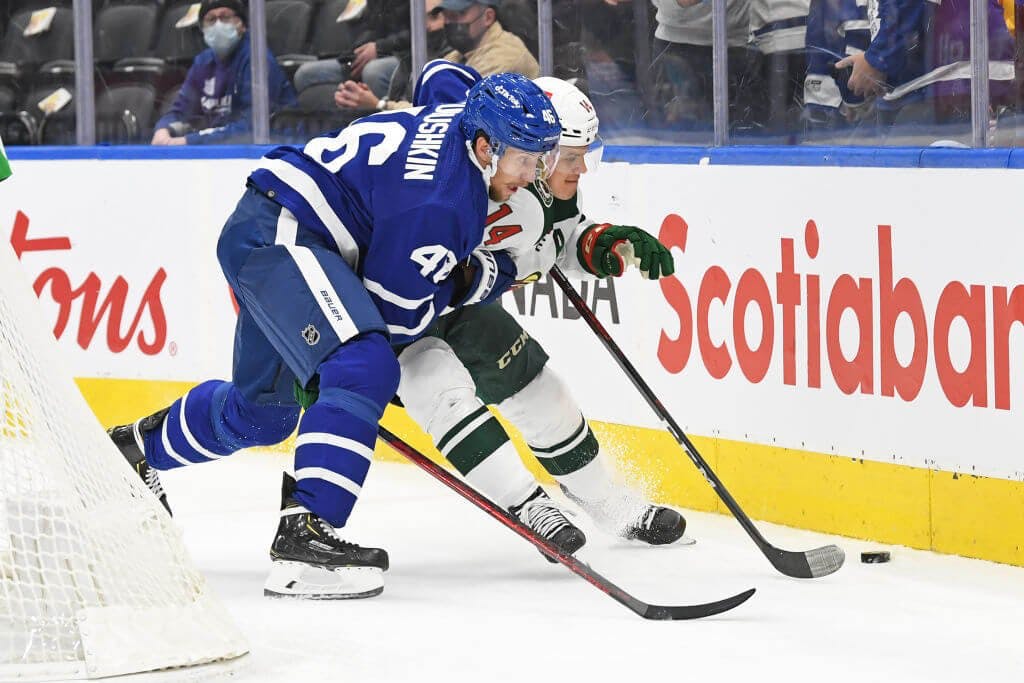 By Stephen Brown
10 months ago
Comments
It’s only been 11 games, but Ilya Lyubushkin has already become a favourite among Maple Leafs fans. Whether it be his defensive play, his tendency to steamroll players or his play in front of the net, it’s safe to say fans love the Russian Bear. But it’s not just the fans that have liked his game. Head coach Sheldon Keefe promoted Lyubushkin up to the top pair with Morgan Rielly for a few shifts during the Heritage Classic against the Buffalo Sabres. That pairing started together last game against the Dallas Stars and it looks like they will be staying together against the Carolina Hurricanes on Thursday night. Mind you, TJ Brodie and Justin Holl were the ones who matched up against Jason Robertson the most on Monday night. We’ll get into it a bit more as we go, but Rielly and Lyubushkin or a player like Lyubushkin finding chemistry could be instrumental for the Maple Leafs. We’ll also talk about my worries with the pairing.

It seems like promoting Lyubushkin higher in the lineup has been an idea for a while now. Possibly ever since the Maple Leafs acquired him back in February in a deal that sent Nick Ritchie and a conditional pick to the Arizona Coyotes. When you consider that Ben Chiarot was traded to Florida for a first-round pick and a prospect drafted in the third round just a few years ago, you have to like the Lyubushkin deal for the Leafs. The fact that Ritchie has five goals and seven points in nine games since joining Arizona doesn’t phase me. Good for him. As Keefe mentioned towards the beginning of this month, he said he wanted to give Lyubushkin a chance to get acclimated and comfortable before giving him more responsibility.
Advertisement
Ad
Advertisement
Ad

“Part of what we talked about today is that he is feeling better around here in terms of knowing what we expect & what we are looking for from him.”

Wants to make sure Ilya is comfortable before giving him more mins, tougher match-ups pic.twitter.com/73sRq5FxEI

For this pairing to work, the Leafs may have to tie Lyubushkin down at the offensive blue line with some bungee cables. Lyubushkin is a guy that profiles as a defensive first player, but he sure does pinch a lot. Between him and Rielly, you can only hope one realizes they both can’t be down at the dots or below the goal line. If they’re able to stay on the same page and Lyubushkin continues to make the simple plays with the puck on his stick, I like the potential here. Here are his numbers in the 11 games so far. Also worth noting that his 11.25 hits/60 are almost double the next Leafs defender if you want to exclude the one game Muzzin played in the sample since Lyubushkin joined the Leafs.
Advertisement
Ad
Advertisement
Ad

My main worry is that Lyubushkin’s puck handling, skating, and decision-making in the offensive zone will be exposed by playing more minutes against tougher competition. I would much rather Lyubushkin play with Rasmus Sandin on the third pair. I am also worried that Lyubushkin’s lack of offence will stunt Rielly’s or the team’s offensive production. I am all for low-event hockey, especially after the last few months but ideally, the Leafs shouldn’t draw from their strength to improve defensively. But if the difference is a net gain, then who am I to complain? You’ll have to be mindful of sample sizes when looking through the numbers below.

Advertisement
Ad
Advertisement
Ad
I’d be curious to see the Leafs try Rielly with Timothy Liljegren again at some point. There were some lapses, but I’ve found it very difficult to evaluate anyone’s play over the last while with the goaltending playing so poorly. But it is a nuanced conversation, the defence could be helping out a bit more. I also don’t believe the xGA tells the story of that pairing or the team the last while. The stat is trying to tell us what should happen most of the time by assigning a percentage chance of the puck going in based on the distance and angle of a shot. But it is trying to do so while not factoring in the speed of the play or the position of the players around the puck. I am not trying to sound like a dinosaur, but are we shocked when an NHL player, standing alone in front, tips a puck in for a goal? I am not saying that was the downfall of the Rielly Liljegren pairing, but Rielly isn’t known for his play in front of his net, and neither is Liljegren. To be fair to Liljegren, he is just 22 years old with only 56 games of NHL experience. Their underlying numbers together as a reason for optimism, maybe there’s something there in the future.
I realize there is a lot of randomness to on-ice save percentage, but I found the numbers for Maple Leafs defenders since they acquired Lyubushkin interesting.

Advertisement
Ad
Advertisement
Ad
I wouldn’t read too deep into the numbers, I just found it crazy to see Lyubushkin with an on-ice save percentage of .942 at 5V5 with how the goaltending and defence have performed. His dedication to clearing guys away from the Maple Leafs net is a big reason fans have gotten behind him. In the Leafs 10-7 win over the Red Wings a few weeks ago, Lyubushkin was on the ice for one goal for and zero goals against in 17:42 of TOI. I’ve never been happier to see nothing happen during a hockey game and he is one of the lowest event players in the league. Lyubushkin is just 27 and will be 28 this April. Lyubuskin will be an unrestricted free agent this offseason, but I would happily welcome him back next season. I hope they can work out an extension that makes sense.

Leafs need to be stronger in front of their net

Why Break Up Rielly Brodie

When the Maple Leafs first broke up Rielly and Brodie, it was right after Jake Muzzin went down with his second concussion. It was mainly out of necessity to create a functioning second pair after a few chaotic games. But then it got me thinking, it would probably be easier to find a new partner for Rielly than it would find someone that would fit next to Muzzin on the second pair. I am not necessarily a fan of breaking the team’s most consistent pairing over the last two seasons, but I am open to whatever works. This quote from Keefe on what Muzzin has struggled with this season from January is very honest.
Advertisement
Ad
Advertisement
Ad

Trying to find a top-four responsible puck-moving defenseman at this year’s trade deadline might be like searching for a needle in a haystack. Of course, you can find one, but probably not without trading away multiple top prospects and picks. Being a buyer should be about striking a balance between present and future value. If Lyubushkin or Liljegren can find success with Rielly then that frees up Brodie to play with Muzzin or someone else on the second pair. Brodie’s ability to play both the left and right sides opens up more options for the Maple Leafs to explore. If I am honest, whether or not Muzzin returns before the end of the regular season, the Maple Leafs would be wise to prepare for life without Muzzin anyway. While it’s not his fault, Muzzin has been injured in the last two playoff series and was hurt just before the series against the Bruins in 2019. Obviously, I wish him the best and hope he can return and be part of the solution.
Advertisement
Ad
Advertisement
Ad

This could also explain why the Maple Leafs have been linked to both left and right-handed defenders in trade rumours. Elliotte Friedman again mentioned Hampus Lindholm being their guy in the most recent edition of 32 thoughts Wednesday night. He also mentioned Seattle’s Mark Giordano, Dallas’ John Klingberg, Philadelphia’s Justin Braun and San Jose’s Jacob Middleton. With less than a week until the trade deadline, we’re finally getting closer to seeing whatever it is Kyle Dubas has up his sleeve.
If you would like to know more about San Jose’s Jacob Middleton, you can check out the video I made on him over at my YouTube channel Downtown Sports
STATS from Evolving Hockey and Natural Stattrick
MORE FROM THE LEAFSNATION
Is Auston Matthews’ outspokenness of officiating hurting or helping the Maple Leafs?
Advertisement
Ad
Advertisement
Ad
Rookie goaltender Erik Kallgren will start for Maple Leafs against Hurricanes
Trade Deadline Mailbag: Moving Mrazek, Interest in Giroux, where Giordano would fit on the Leafs and more
Rumour Update: Friedman reporting Leafs interest in Lindholm, Motte, and…Chara?