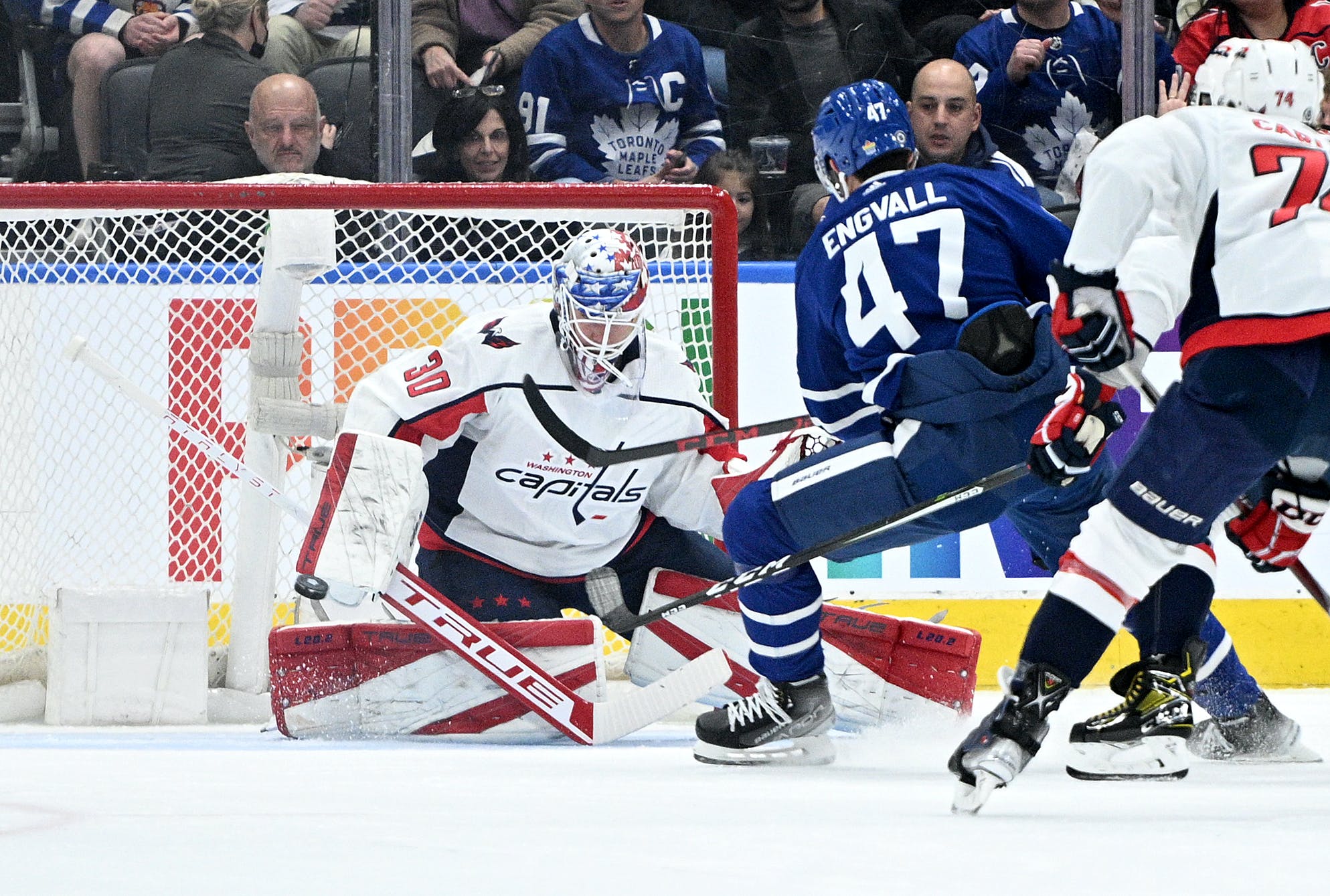 Photo credit: Dan Hamilton-USA TODAY Sports
By Jon Steitzer
6 months ago
Comments
Qualifying offer day never disappoints and as the deadline passed we began getting some interesting names materialize on the list. The most interesting, at least from a Leafs perspective has to be Ilya Samsonov.

#Caps have extended qualifying offers to forward Damien Riat and defenseman Tobias Geisser. Both players are expected to play in Europe during the 2022-23 season. #Caps elect not to issue a qualifying offer to goaltender Ilya Samsonov.

Considering that just last week, the Capitals fully intended to qualify Samsonov this comes as a pretty big surprise, especially when they’ve already unloaded a goaltender on New Jersey this week. Obviously this is a pretty good sign that the rumoured Darcy Kuemper deal with Washington is essentially done and we’re just waiting until 12 on Wednesday to make it official.

The decision not to qualify Samsonov was a financial decision. As an RFA (with arbitration rights), the #Caps projected that he'd come in at $3-$3.5 million per, which, in their view, was too much for a backup and not justified based on his performance to date.

For the record, if that is what his arbitration case is projected as, some team (read: The Toronto Maple Leafs) should have considered acquiring Samsonov to get him on a good short term bargain deal for a year or two before negotiating. It seems far more likely (and maybe to Samsonov’s benefit) that he can negotiate on the open market. As for the Capitals, we have to assume that they will aggressively be competing with the Leafs in the backup goaltender market. The fun never ends.
Advertisement
Ad
Advertisement
Ad

I still believe the Caps are front-runners for Darcy Kuemper but obviously Toronto equally on the lookout for goalie help if Jack Campbell lands in Edmonton on Wednesday… the goalie carousel is always fascinating. https://t.co/JzFcxXI8y8

By thinks they are the front runners, Pierre means he knows they are. Ditto for the Jack Campbell stuff. Maybe the NHL can start shooting us all straight on the handshake agreements we know are in place. Many of these players have had permission from their teams to talk to others, so we can skip the “TAMPERING” screams as well. Onto the important stuff, the Leafs. This LeBrun tweet seems like reason enough to seriously explore the option of Samsonov.
Let’s start with the sticker price for @Ilya Samsonov. According to the Evolving Hockey contract projections, Samsonov should be due for a four year, $4.4M AAV contract. That seems pretty manageable for a 25 year old goaltender with a lot of upside. The catch is that much like Matt Murray, the recent history on Samsonov hasn’t been particularly kind.
Advertisement
Ad
Advertisement
Ad
By comparison to his team performance, Samsonov’s numbers are pretty much on track. No one has been dragging him down.

In contrast here is Matt Murray:

Or even Jack Campbell:

Here are the rest of the numbers on Samsonov:
Nothing here looks like an improvement over Campbell or even in some cases Mrazek, but when a 25 year old starting goaltender is available, especially one that was taking in the first round, I guess we all go a little nutty and start dreaming about the upside. Considering that the 25-28 age range is when we often see goaltenders establish themselves in the NHL, I guess Samsonov is an intriguing target, and possibly one that Curtis Sanford would want to work with.
Advertisement
Ad
Advertisement
Ad
By the numbers, Samsonov doesn’t look like an enticing option, at least for the 2022-23 season, but there is something to be said for what comes beyond that. If he takes a step in the positive direction at all, and one can assume that it’s entirely possible, Samsonov could be the better long term solution while Murray serves as the best short term option. The fact that Samsonov has been able to get into more games than Murray as provides a bit of a safety net for that tandem, and if I’m to set the lowest possible bar, the Capitals managed to be a playoff team with Samsonov in net, surely the Leafs can as well.
None of this is a ringing endorsement for Samsonov, nor has there been too ringing an endorsement for Murray, but both represent attempts at finding something that can move the bar on the Leafs goal situation. And at the very least, perhaps the availability of Samsonov moves the bar on the Murray trade to be a bit more favourable to the Leafs now that there is another option.
Advertisement
Ad
Advertisement
Ad
Data sourced from Evolving Hockey, Hockey Reference, and Money Puck
More From TheLeafsNation.com: