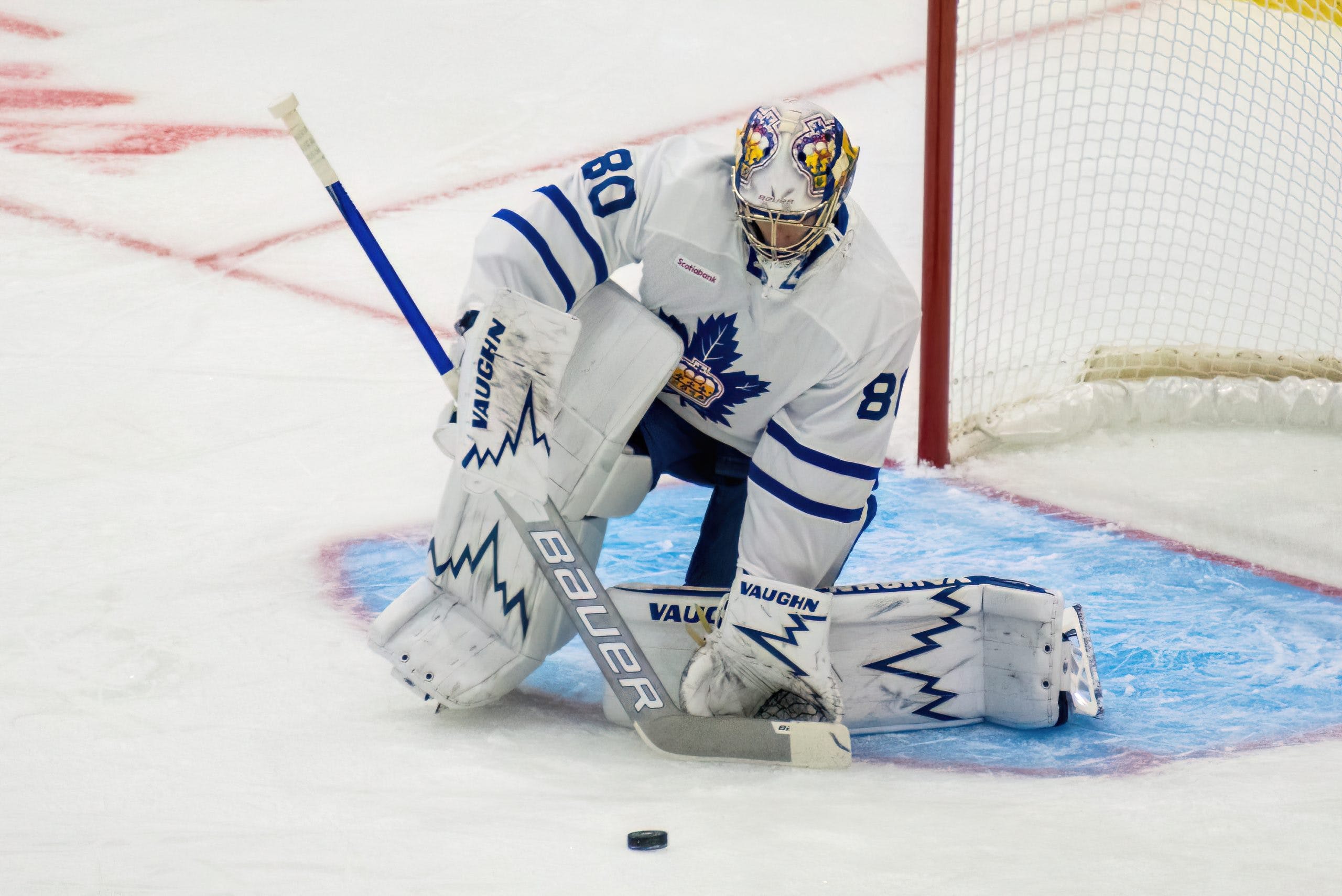 Photo credit: Steven Ellis/The Leafs Nation
By Jon Steitzer
2 months ago
Comments
Everything was looking good. The Leafs ended the second period up 2-1. Auston was buzzing. Nylander was doing Nylander things, and with the exception of Marchand’s penalty shot goal, the Leafs were successfully shutting down the hottest team in the league. Then Erik Kallgren came out to start the third and while the Leafs hung on for the win, there was an immediate feeling of panic.

Sheldon Keefe says Ilya Samsonov was injured during the penalty shot attempt. Has no other update on him at this point. Unsure if he will make the trip to Carolina or not at the moment. @BodogCA @RinkWideTOR

Brad Marchand ties the game on the penalty shot pic.twitter.com/TECnwgU0Hj

As a recap the Leafs are also facing an injury to Matt Murray (on ice but not able to get into the butterfly position yet) and Joseph Woll (been on ice and possibly could return in November). Dennis Hildeby, the only other goaltender under contract is presently playing in Sweden, and while he’s been an absolute standout this year, his availability for recall and whether recalling the 21 year old is a good idea remain to be seen.
In the short term, Erik Kallgren closed out the third nicely. He’s also going to get the start Sunday as the Leafs determine what their next steps are. He’ll probably get the Tuesday night game as well, but Friday/Saturday involves back-to-back games, and by then, the Leafs require one of Samsonov, Murray, or Woll to be magically healed or need to look at external options. They probably need to figure out who will be wearing a Leafs ballcap on the bench for the next couple of games too.
Advertisement
Ad
Advertisement
Ad
Given the emergency situation, the Leafs do have the option to bring up Keith Petruzzelli as Kallgren’s backup in the short term. If they want a bit more flexibility with him, they also now have a player’s contract available where they can sign him and bring him into the fold completely. The result is the expected 2021-22 Newfoundland Growlers tandem is now your 2022-23 NHL tandem.
With the extent of the injury not yet known, there might be some resistance to exploring the trade options, especially since the Leafs are primed to be fleeced in any deal unless they are taking on another team’s albatross contract (Anton Khudobin, hello.) It might also be important to learn the extent of the injury to know the calibre of goaltender the Leafs need to consider. If they need someone just good enough that they can keep the Leafs afloat in the short term or if they need someone who could potentially handle the majority of the starts for the Leafs.
Advertisement
Ad
Advertisement
Ad
When it comes to external options, most teams are either as shallow in goaltending depth or depleted injury-wise as the Leafs the options are fairly limited. Some of the best names for short-term fixes might be Malcolm Subban, Collin Delia, or Louis Domingue. All provide some ability to give the illusion of being an attempt at short/mid-term support for the Leafs. If things go on a bit longer the options need to start shifting to teams that look like they will be on the outside of the playoffs and exploring sizeable options at their starters. Relying on Matt Murray seems like as bad an idea as ever and there are worse things than having a viable third option in net behind Samsonov and Murray anyway as the Leafs are 12 games in and both potential starters are hurt.
Advertisement
Ad
Advertisement
Ad
Given that the Leafs have a contract available and in any potential trade there is the option to send a contract out when the Leafs are bringing one in, it’s worth doubling back around to Keith Petruzzelli, and what Toronto supposedly has in him.
That’s a strong start this year, but as you can see by the 28 game total last season, he’s been injury prone too. He’s also been primarily an ECHL goaltender, and a contract at this point is based primarily on desperation and a strong first five games of this year. The Leafs still might not have a better choice. Dylan Ferguson certainly doesn’t offer the Leafs a better alternative.
There is of course one option that would be ideal, and that is Samsonov has a good night’s sleep and it was never as bad as we thought. The best case scenario isn’t one that comes up often for the Leafs though, and instead we are likely to spend the next week debating the pros and cons of a lot of really lousy goaltending options.
Advertisement
Ad
Advertisement
Ad