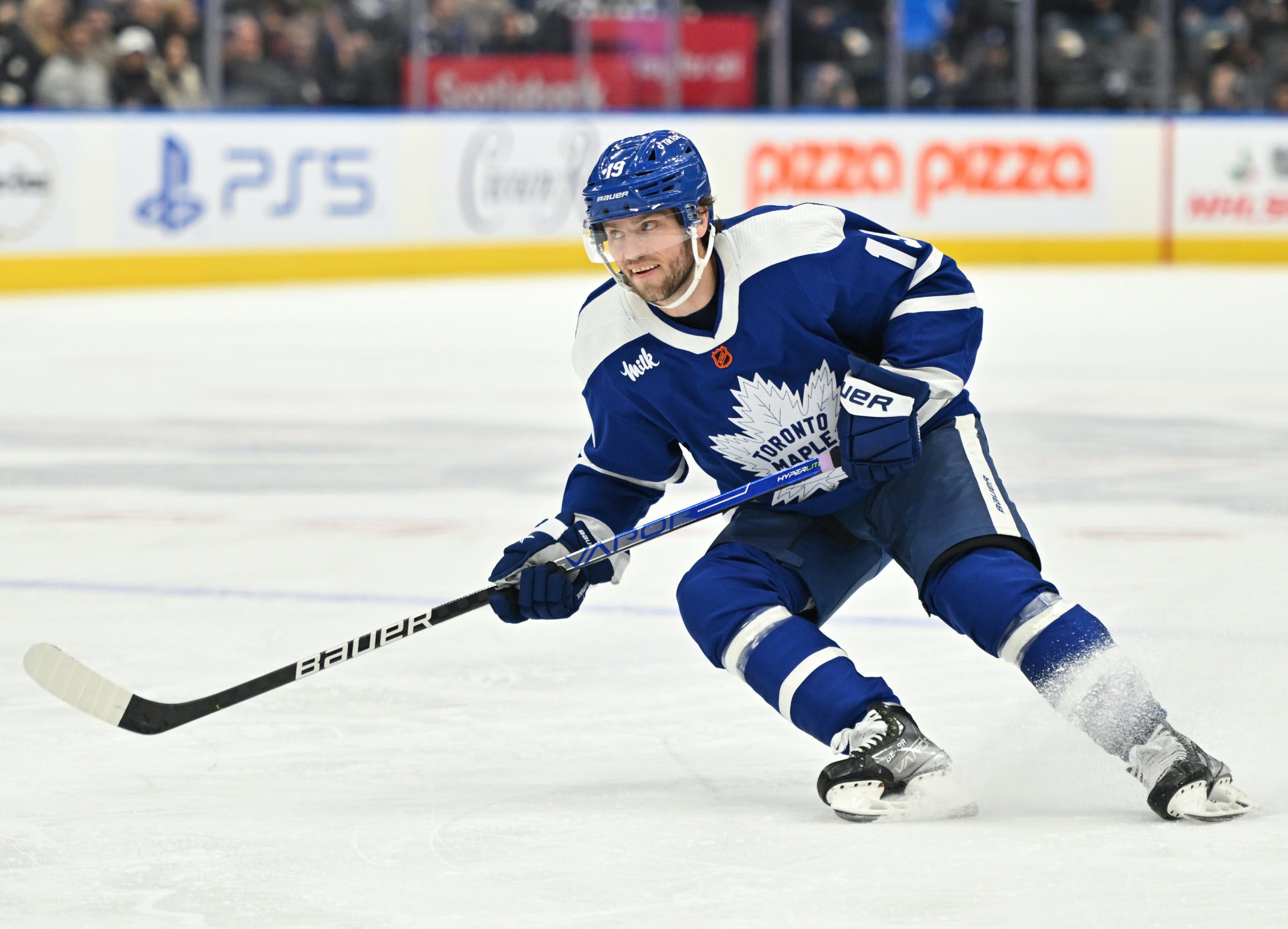 Photo credit: Dan Hamilton-USA TODAY Sports
By Nick Barden
1 month ago
Comments
Denis Malgin is off to Colorado and Calle Jarnkrok is set to return from injury to take his spot in the Maple Leafs’ lineup.
Toronto began practice at 12 p.m. on Monday, with the news of Malgin being traded coming at almost precisely the same moment. The team started practice working on the power play, which hasn’t played the best as of late.

The Leafs are sticking with a five-forward PP1.

Toronto is going to stick with their five-forward first power play unit. When it comes to the second unit, the Maple Leafs will roll out three forwards and two defencemen, which is also quite interesting.
Their power play is currently the 14th-best in the NHL following a season where Toronto had the top power play in the entirety of the NHL. This switch is likely to see if a different-looking first unit can offer up more scoring, possibly until Morgan Rielly returns.
“Obviously the power play hasn’t been nearly good enough in the last month or so, and we need to start looking at different options.” Maple Leafs head coach Sheldon Keefe said on Saturday morning in Washington.
Advertisement
Ad
Advertisement
Ad

Calle Jarnkrok returns to practice today for the Leafs. He takes the place of the traded Denis Malgin alongside John Tavares and Mitch Marner.

When it comes to Jarnkrok, like I said earlier, he’ll rejoin the Maple Leafs taking Malgin’s spot in the lineup. That means he’ll play alongside John Tavares and Mitch Marner on Tuesday night against the Tampa Bay Lightning.
The 31-year-old said after practice on Monday that he expects to be in the lineup on Tuesday.

Aside from Jarnkrok, there were no other changes to the lineup, so Toronto’s lines will look like this against the Lightning:
Bunting-Matthers-Nylander
Jarnkrok-Tavares-Marner
Kerfoot-Kampf-Engvall
AstonReese-Holmberg-Anderson
Giordano-Holl
Sandin-Liljegren
Brodie-Timmins
When it comes to the Maple Leafs’ starting goaltender for Tuesday’s game, Keefe didn’t provide an update. Well, he did, but the head coach didn’t reveal who would be in net against Tampa.
All he said was: “We’ll see.”

Who’s in net vs #GoBolts?

40 minutes into practice, Michael Bunting took a puck to the face and was bloodied, according to a number of Leafs reporters. No need to worry though, because Keefe addressed it after the skate, saying he could hear him, “which is a good sign.”
Advertisement
Ad
Advertisement
Ad

Keefe post-practice: “I haven’t seen (Bunting) yet…but I’ve heard him, which is a good sign.” https://t.co/iUeOATXnAi

As for Dryden Hunt — who was acquired in the Malgin trade — he will arrive in Toronto on Tuesday and will be available to practice on Wednesday with the Maple Leafs.

Per Keefe, Hunt expected to arrive tomorrow and be available for practice on Wednesday #Leafs

The Maple Leafs have two games remaining before the holiday break. There’s the game on Tuesday night against Tampa at Scotiabank Arena, which you can find on TSN4 at 7 p.m. ET.
Then, Toronto takes on the Philadelphia Flyers at home, again, on Thursday at 2 p.m. on Sportsnet. Their final game before the holidays is special, though, because the Maple Leafs will be wearing their ‘Welcome To The Flipside‘ jerseys.
And as we should know by now, Mitch Marner is a big fan of afternoon games in Toronto. So, expect Thursday to be a lot of fun as we creep into the holidays.
Advertisement
Ad
Advertisement
Ad