Advertisement
Ad
Leafs offer up a present to the Habs in the season opener: Muzzy’s Muzings 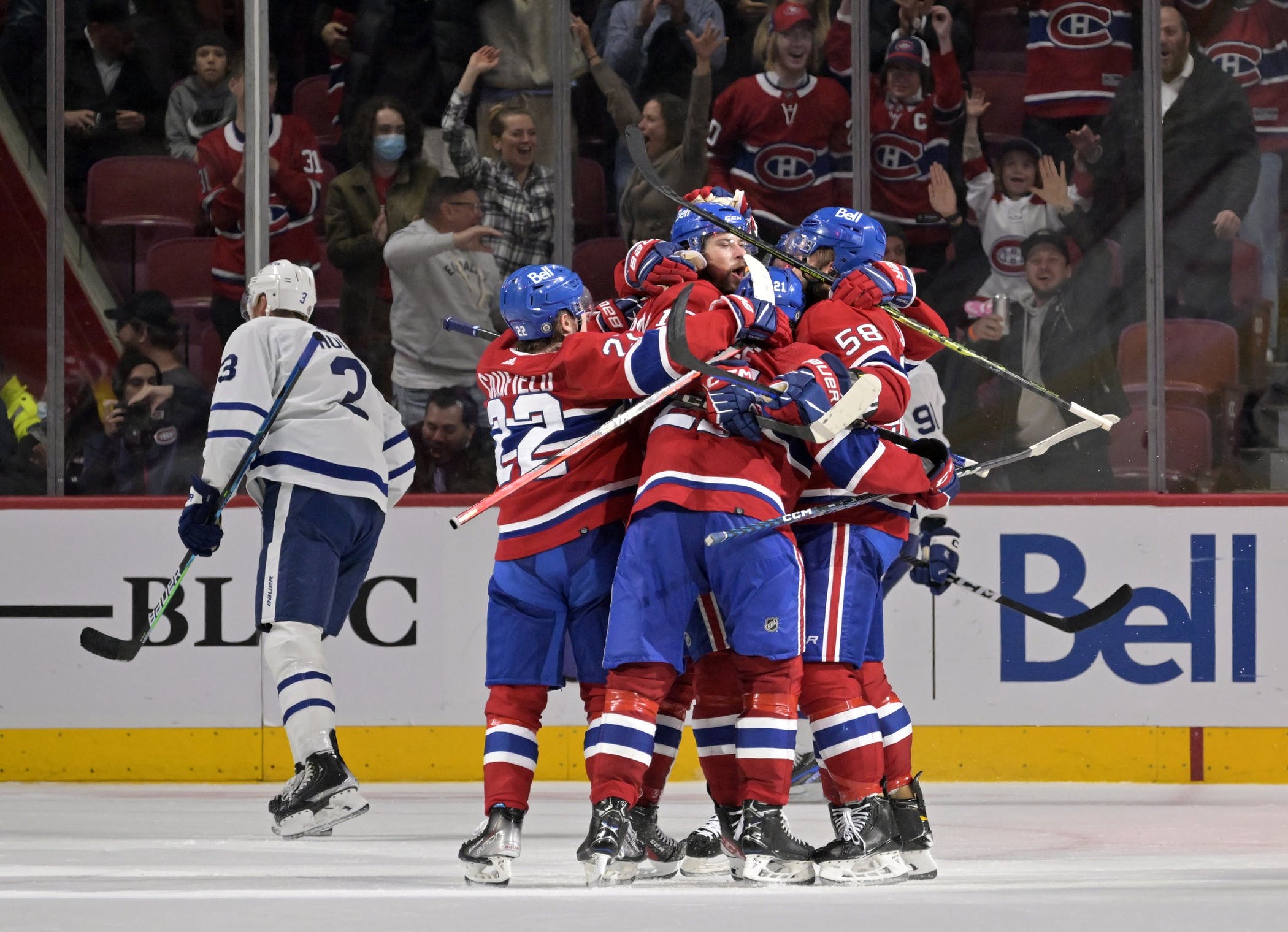 Photo credit: Eric Bolte-USA TODAY Sports
By Nick Alberga
3 months ago
Comments
The first of 82 is in the books.
And with that, rest assured, I have many thoughts to share on tonight’s game —especially after whatever the hell that was.
With that in mind, following most Leafs games this season, depending on when I want a night off to play NHL 23 or something, I’ll be offering my post-game thoughts/musings.
So, let’s get to it:

What needs to change for tomorrow? 👇 pic.twitter.com/IBPNW5v6Br

Burlington native Josh Anderson notched the game winner with 19 seconds left in regulation as Toronto fell to Montreal, 4-3, in the season opener. The last five minutes of the game was comparable to the final call at your favourite establishment; frantic, wild, and unneeded. Sean Monahan gave the Canadiens a 3-2 lead with 2:30 remaining before William Nylander responded on a breakaway just 40 seconds later. That set the table for Anderson’s heroics; his 11th goal in 28 career outings against his hometown Maple Leafs. Also, shoutout to Cole Caufield. He was a monster potting two goals while mustering five shots on goal. The sniper now has 24 goals in 38 total games under Martin St. Louis.
Advertisement
Ad
Advertisement
Ad

Memo to NHL teams: If you really want to shut down Cole Caufield, hire Dominique Ducharme.

Eight of the last 10 season openers between Toronto and Montreal have now been decided by one goal. The Canadiens have won four in a row against the Leafs at the Bell Centre.
Muzzy’s Muzings:

Same Old Same
At risk of being too harsh, we’ve seen this lethargic, sloppy, and uninspired episode before, so it’s fair to comment on it at the very least. Offensively, Toronto had some chances, but all in all, it was just too easy of a night for Montreal’s young and inexperienced d-corps. Collectively, the Leafs had their moments, but lacked the consistency necessary to win the hockey game. They got what they deserved.

Turnover City
It’s one game, but Toronto will have to clean things up defensively in a big way moving forward. In the long run, a lot of Montreal’s offence on the night was generated by turnovers, puck retrievals and lost face-offs. There’s no other way to put it, the Leafs played down to their opponent in the game, and it ended up costing them on the scoreboard. They were a disaster in their own zone for most of the night, especially in the final five minutes of the game. For what it’s worth, Jake Muzzin and Justin Holl were a combined minus-three on the night.
Advertisement
Ad
Advertisement
Ad

A ticked Sheldon Keefe: "It was early season sloppiness, but I don’t expect that. For everything our team has been through together, it’s unacceptable. We have to be way more responsible." #Leafs

Quiet night for 34
When a guy who had 101 goals in his previous 125 games doesn’t register a goal or point, you call a spade a spade and just chalk it up to a rare quiet night. Matthews received 19:54 of ice and tallied five shots on goal. Honestly, I already feel for the Washington Capitals tomorrow night. They’ll have to deal with his wrath.
Make me a milkshake, Malgin
After an impressive eight-point preseason, Denis Malgin did not skip a beat in the season opener notching his first goal as a Maple Leaf. All things being equal, the 25-year-old looked pretty good. He played 11:33, mustered two shots on goal, and was a plus-two on the night.
The Good, The Bad, The Murray
I’m in no way burying Murray, because if it weren’t for him, Toronto would’ve been cooked by the first intermission, but three of the four shots that beat him went glove side. Maybe Montreal picked up on something, maybe not. I’m looking forward to Saturday night, when presumably, the 28-year-old will get the call at home against his former team, the Ottawa Senators.
Advertisement
Ad
Advertisement
Ad
Highlight of the night:
https://twitter.com/MapleLeafs/status/1580376056384475136
Hope you tailed on the William Nylander anytime goal. The 26-year-old now has 18 goals in 33 career games against Montreal and five goals in six career season openers.
What’s next?:
Toronto is back in action on Thursday night as they host the Washington Capitals in their home opener. Ilya Samsonov, who was not qualified by Capitals back in July, will make his Leafs debut against his former mates. Both teams, who will be playing in the back end of a back-to-back, are coming off losses. Washington got thumped by Boston 5-2 in their home opener on Wednesday night. This will mark Toronto’s second of four in six days to start the season.
PSA: Don’t forget to check out ‘Leafs Morning Take’ with yours truly and Jay Rosehill Thursday morning at 11 a.m. EDT on The Nation Network YouTube page. We’ll have plenty to say, trust me.
Advertisement
Ad
Advertisement
Ad