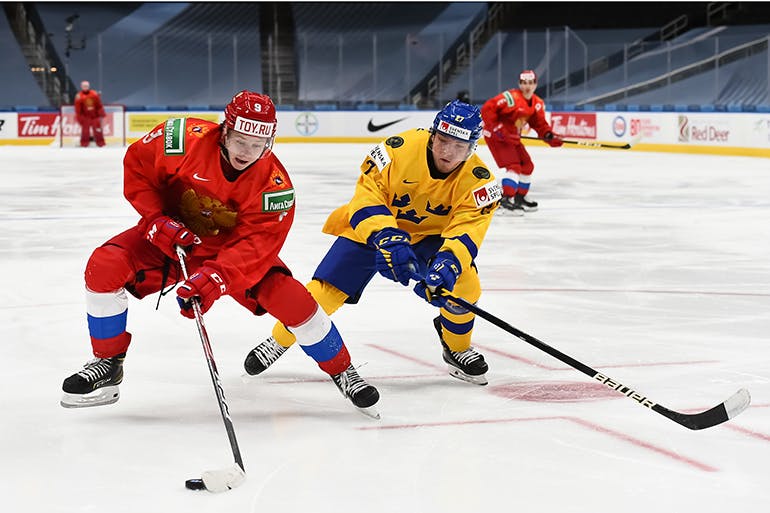 Photo credit: Russian Ice Hockey Federation (en.fhr.ru)
By Nick Richard
2 years ago
Comments
Mikhail Abramov missed out on the first two games of the World Juniors for Russia as a healthy scratch and after a pair of impressive performances in Russia’s next two games, he will once again be forced to watch his teammates from the press box after being handed a one game suspension by the IIHF on Friday afternoon.

Prior to a faceoff during the second period, Abramov lined up against Swedish forward Arvid Costmar and they had to be reset a couple of times, with Abramov knocking Costmar over prior to the drop of the puck on one occasion. When play did resume, Costmar and Abramov continued to battle off of the draw with Costmar tying up Abramov’s stick and managing to avoid a penalty call. Cleary frustrated, Abramov trailed Costmar into the defensive zone where he delivered a sneaky slew foot to the Vancouver Canucks prospect who did a good job of baiting Abramov into a poor decision.

After working his way into the lineup and playing quite well with two assists in two games, it is certainly disappointing for Abramov and the Russian squad that they will be without him for their quarter-final matchup against Germany but he should return to his role of second line center if his teammates are able to advance in his absence.
Advertisement
Ad
Advertisement
Ad
(Statistics from EliteProspects.com)