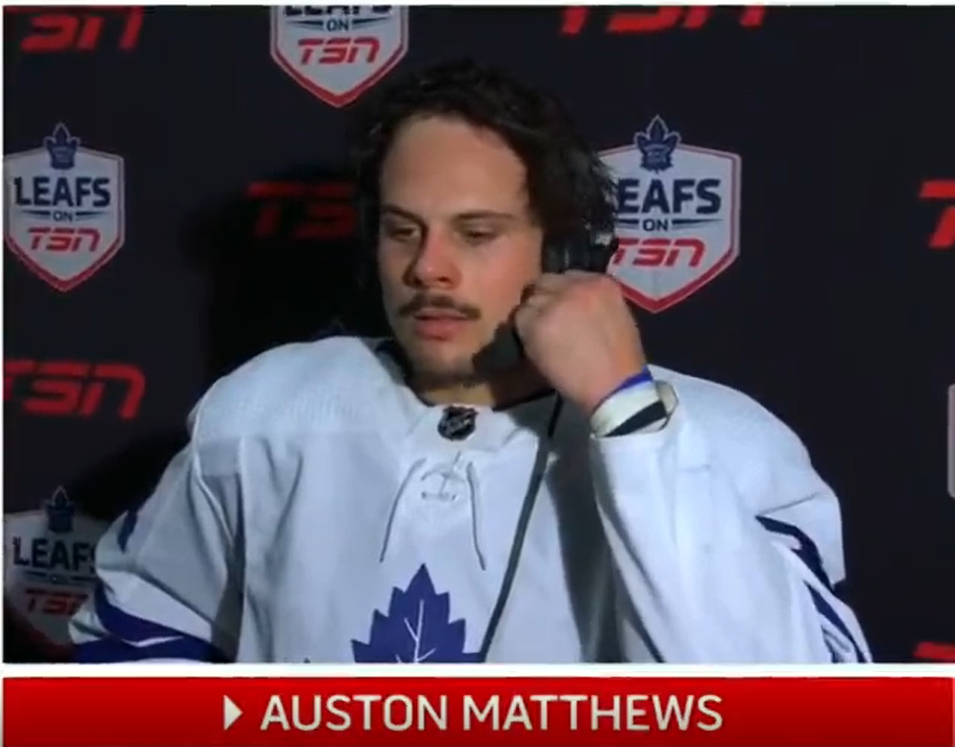 By Ryan Hobart
1 year ago
Comments
Recently, when interviewed by Gord Miller in between the second and third periods of the Leafs’ last game against the Anaheim Ducks, @Auston Matthews did not mince words when it came to how the media’s opinion affects how he feels about his own game:

Matthews had been struggling to score at 5-on-5, something he had been excellent at throughout his career, until the Leafs’ recent California road trip, where he scored an even strength goal in each of the Leafs’ three games against Los Angeles, San Jose, and Anaheim. Gord’s question is a fair one: it must feel good for Matthews to be returning to his typical levels of dominant 5-on-5 performance.
Matthews’ comments have sparked a bit of controversy; some have referred to the interview as him “calling out” the media, and that he’s “not a fan of” the media. To be fair, these were on Facebook, a place design to promote controversy over facts, but it still begs squashing.
Gord Miller himself, being the gem of a person that he is, mentioned that he’d been asked about it and didn’t see it as a slight:
Advertisement
Ad
Advertisement
Ad

Matthews had been asked for weeks about not scoring 5 on 5, he had just scored in his third straight game, so I asked him if he was ever bothered by the criticism or concerned. His answer (“I could care less what you guys say, to be honest”) was direct and interesting.

I suppose I could have thrown out the generic “tell us what happened on your goal,” which would have elicited the usual formulaic response. If you want to get interesting answers, you have to ask interesting questions…I thought the interview was a welcome change from the usual.

Not caring what someone thinks can easily be taken as a sign of disrespect. However, it’s a bit of a stretch to suggest that the media should be taking offense on this. When a player has negative public comments about them, it’s their job to not let that affect them. Players get brutalized by the media when things are down, and if there’s a hint of that getting to the player, some of the worst members of that circle of hockey writers will circle in on that and make it worse.
Matthews used some strong language to get that point across, to be sure, but coming off of the ice full of adrenaline makes it difficult to be measured and tactful. There are very few jobs where you’re forced to give a live, on-air interview when soaked in sweat and your heart is pumping like mad about circumstances that might have literally just unfolded, minutes before. It would be unfair to consider those strong words as a lack of tact or respect. Matthews even says “no offense”, which in some circumstances might be considered a bit limp in terms of apologizing for a real grievance, but in this case, it should be sufficient consideration.
Advertisement
Ad
Advertisement
Ad
A strong contingent of fans generally celebrates this conduct, and I’m sure this is no different. I think back to @Phil Kessel’s way of handling the weaselly Dave Feschuk as a prime example. I don’t think anyone but Feschuk was upset that Kessel said what he said, and that’s how it should be. We should support media that act in good faith, asking honest questions and treating players with respect, but when they cross the line, they deserve to be called out for it. But not all members of sports media do that. That’s why it’s so important for Matthews and others to isolate themselves from that public commentary.
Whether or not what Matthews said is actually true — I don’t think anyone is perfect at isolating themselves from the opinions of others — the statement is refreshingly sparky, and certainly wasn’t meant with disrespect or offence.
Advertisement
Ad
Advertisement
Ad
If you disagree, or share the same sentiment of support for this kind of interview response, feel free to voice your opinion in the comments.