Advertisement
Ad
Mistakes cost Leafs as they fall to Lightning 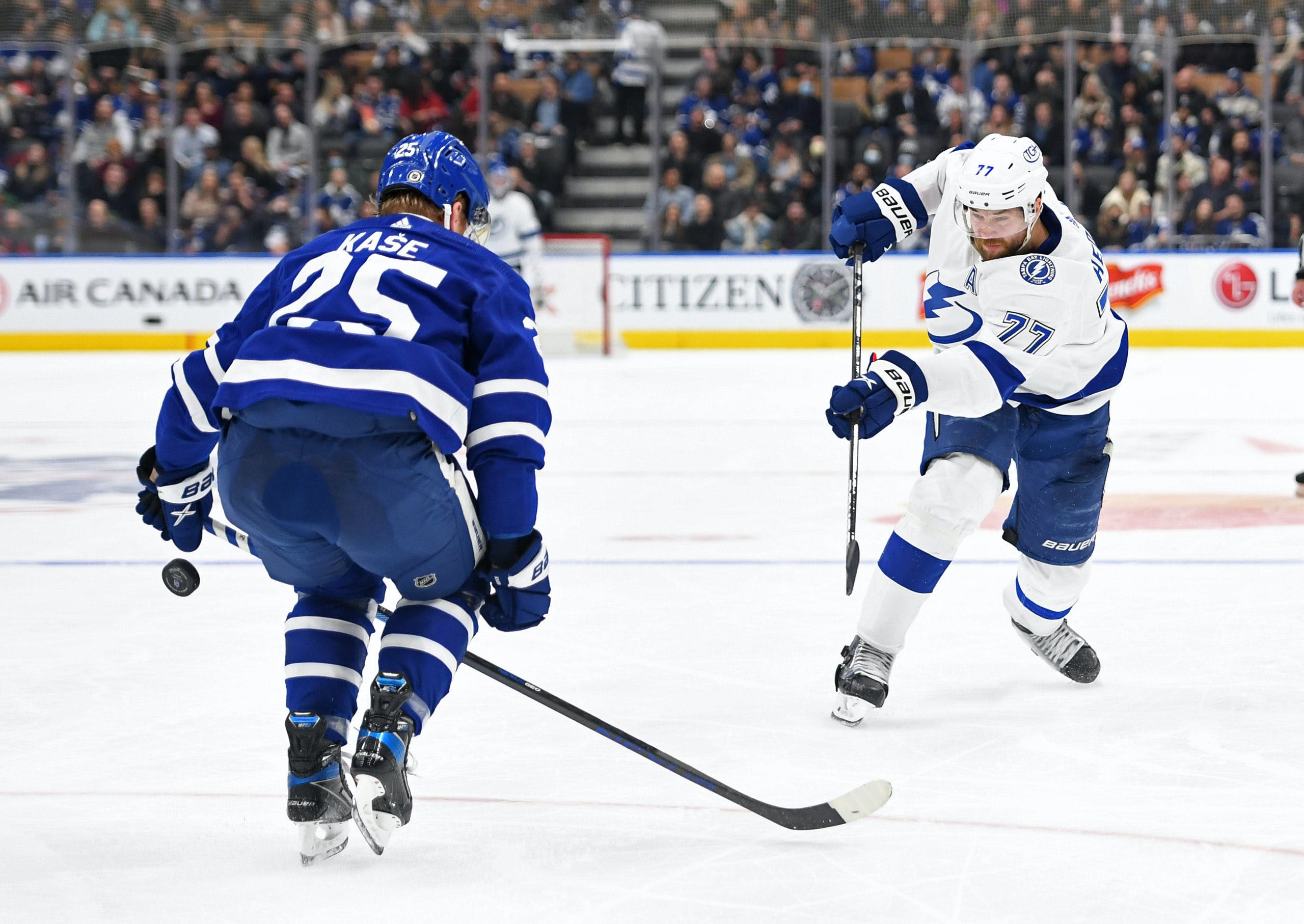 Photo credit: © Dan Hamilton-USA TODAY Sports
By Nick Richard
1 year ago
Comments
The Tampa Bay Lightning pulled even with the Leafs in the standings with a 5-3 victory on Thursday night, earning a measure of revenge for an OT loss against Toronto earlier this season. The Leafs played a mostly solid game but managed the puck poorly on too many occasions and the Lightning were able to take advantage of those mistakes more often than not.
The Leafs got off to a strong start and took the lead with a goal from @Ondrej Kase after @Morgan Rielly drew a tripping call on a dangerous play by @Taylor Raddysh. Kaše is a recent addition to the powerplay with Mitch Marner and @Jason Spezza out of the lineup and if his play so far this season is any indication, he has the offensive skill to contribute in that role.

Toronto continued to carry the play and built up a 9-2 lead on the shot clock on the back of some good scoring chances before @Jake Muzzin had his entry pass picked off and was unable to get back and prevent Pierre-Edouard Bellemare from tying the game. That tally seemed to energize the Lightning and with the Leafs on their heels, @Wayne Simmonds was called for hooking to send Tampa Bay to the powerplay. @Steven Stamkos was the recipient of a fortunate bounce as Muzzin’s clearing attempt was knocked down by Kaše and landed right on his stick, allowing him to blast it past @Jack Campbell to give the Lightning a 2-1 lead.
Advertisement
Ad
Advertisement
Ad
The Leafs were able to regroup, however, and after a solid push late in the period, Stamkos took an offensive zone penalty to send the Leafs back to the man advantage. @Auston Matthews proceeded to make a great play off a faceoff outside the Lightning zone, putting the puck through Bellemare’s legs and stepping around him to gain entry to the zone before firing a cross-ice pass to @William Nylander. Nylander managed to get enough of the bouncing puck to put it past @Andrei Vasilevskiy and tie the game with just six seconds remaining in the opening frame.

Thought you could only win faceoffs like that in #NHL22 😳#LeafsForever pic.twitter.com/o6JtJBUoWQ

The second period was much of the same as the Leafs carried play for the most part but were burned by a couple of mistakes. The Lightning managed to retake the lead early in the period when Muzzin was unable to corral a difficult pass from Nylander in the neutral zone, allowing Stamkos to head the other way and set up @Ondrej Palat on an odd-man rush.
Advertisement
Ad
Advertisement
Ad
It was another broken play in the Leafs’ end that saw Tampa extend their lead to two goals as TJ Brodie was unable to make a play along the boards and Stamkos pounced on the loose puck to find Raddysh in the slot who was able to beat Campbell.

As the Leafs continued to push for offense, Sheldon Keefe tried a number of different forward combinations in the back half of the period. Though the Leafs managed to generate chances and sustain some solid offensive zone pressure, they were unable to beat Vasilevskiy and headed into the final period down by two.
The Leafs kept coming in the third period and pulled to within one on Kaše’s second of the night, finishing off a great shift that saw Toronto control the puck for an extended period of time in the Lightning zone. That would be as close as the Leafs would get, however, and after a few more ugly turnovers that Campbell bailed them out on, the Lightning managed an empty netter to put the game away.
Advertisement
Ad
Advertisement
Ad
Ultimately, the final score probably made the Leafs’ overall performance look worse than it was but when you make that many mistakes against a team like the Lightning, it is going to be difficult to overcome. The Leafs had a lot of strong shifts in the offensive zone where they were able to create some good looks but Vasilevskiy stood tall to help thwart the comeback bid.

Sheldon Keefe on turnovers vs TBL: "You can't make those kind of plays, spot them three goals at 5-on-5; The 5-on-5 goals are inexcusable. Those are gifts."

The Leafs need someone to step up in the absence of Marner and Spezza and Kaše has answered the call so far. With a pair of goals on Thursday night, he has four points in his last three games and is taking advantage of the extra chances he is getting in an offensive role. Kaše has been a bright spot for the Leafs all year, but mostly in a defensive role, and now he is showing that he can chip in offensively when given the opportunity as well.
Advertisement
Ad
Advertisement
Ad

Vasilevskiy wasn’t perfect but he made 38 stops to earn a victory against a Leafs team that had plenty of shifts where they were buzzing in the offensive zone. He came up big when he needed to and has now won his last four starts, bringing his save percentage to .927 in the process. The Lightning have surged to the top of the Atlantic Division standings and Vasilevskiy continues to be a big reason why.

As he has all season, Stamkos led the way for a depleted Lightning squad on Thursday night. He picked up a goal and three assists to move into sole possession of fifth in league scoring and now has 14 points during a nine-game point streak. After battling various injuries in recent years, the Lightning captain once again looks like a star and he played like one against the Leafs on Thursday.
Advertisement
Ad
Advertisement
Ad

Holl’s tough season continued against the Lightning and he was eventually demoted to the third pair as @Timothy Liljegren moved up to play alongside Muzzin. As he has for much of the year, Holl struggled to get back and retrieve pucks in a timely fashion and made poor plays with the puck when he was pressured. There have been too many nights where he appears too slow to keep up and it is telling that even with @Rasmus Sandin and @Travis Dermott unavailable, Holl still found himself on the third pair.

Jake Muzzin and Justin Holl were on the ice together for each of Tampa’s first three goals tonight (including one on the power play).

Sheldon Keefe changed his defence pairings after that: