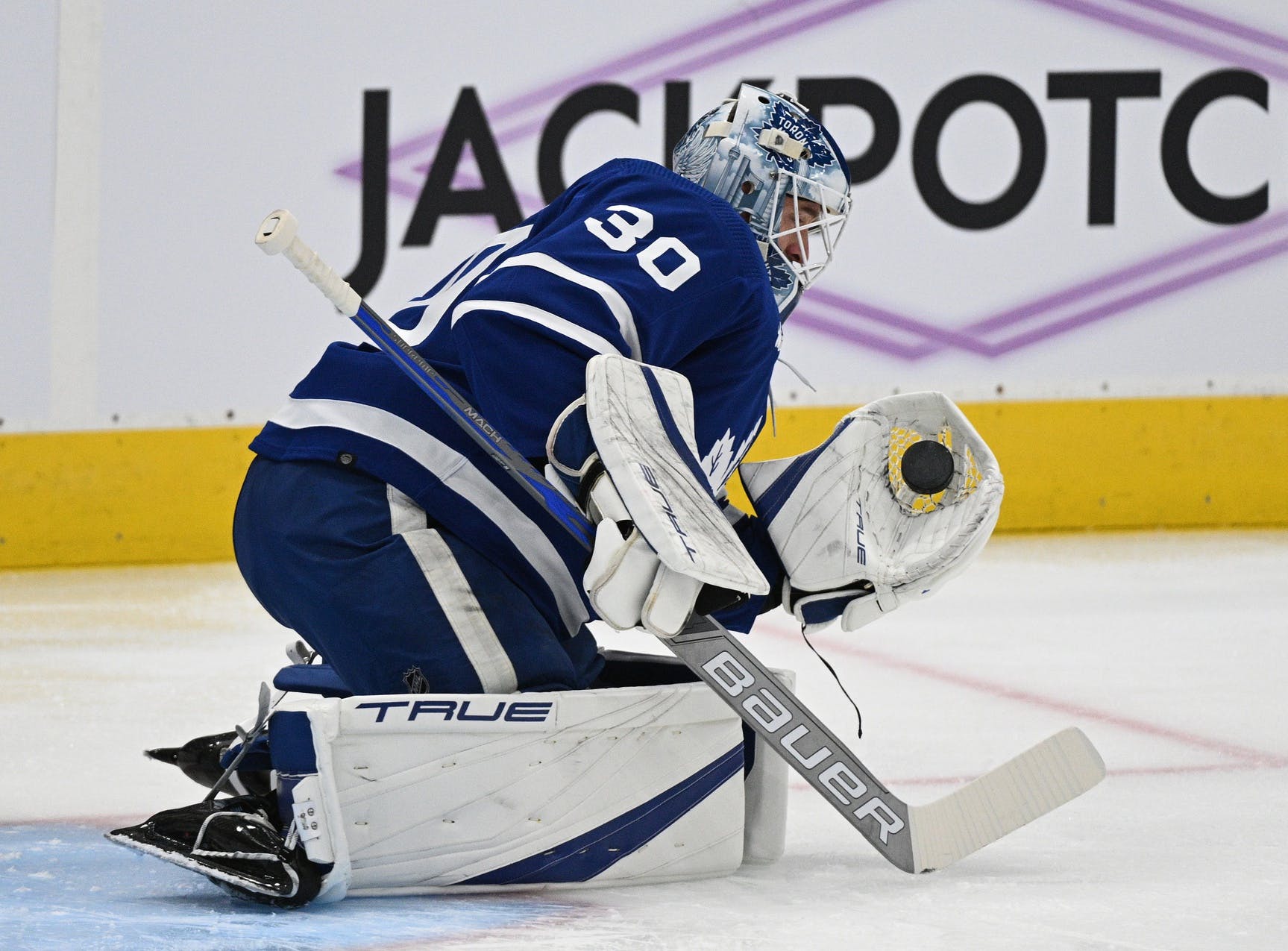 Photo credit: Dan Hamilton-USA TODAY Sports
By Jon Steitzer
2 months ago
Comments
It is by no means a quiet day in Leafs land. The Muzzin and Brodie news kicked off the day and with the recalls of Holmberg and Hollowell, there is the potential for interesting new lines heading into tomorrow’s game with Pittsburgh.
The biggest news:

Matt Murray’s triumphant return will be coming against his former club. Not a bad way to ease Murray back into it and certainly he’ll be fired up for a few reasons now. This likely means we see Petruzzelli sent down to the Marlies in fairly short order to get him ready for getting back into some games with the Marlies soon. They play Friday, Saturday, and Sunday so expect Petruzzelli to be in at least a couple of those games.

That could mean a couple of weeks without TJ Brodie, which isn’t ideal for the Leafs. It will be interesting to see how they hold up in his absence as it could determine whether the priority for the Leafs will be bolstering their blueline or adding more fire power to their offense with their available LTIR relief.
Advertisement
Ad
Advertisement
Ad

There’s plenty to look at in this lineup card so let’s go line by line quickly to break it down.
The Matthews/Marner split up continues and it is probably a worthwhile experiment to continue while both players are performing well. Bringing Bunting back into the first line fold also makes sense as he does bring something unique to that line and he hasn’t had a chance to work with Nylander much.
While I think my initial reaction is to get upset about Kerfoot there, he actually makes a ton of sense with the Tavares-Marner duo. Kerfoot provides a solid puck carrying zone entry option for the Leafs and at least slightly makes up for the departure of Nylander.
The third line is the redux, Nylanderless version of the Swedish House Mafia line. I’m interested in seeing what Holmberg can do with this opportunity.
Advertisement
Ad
Advertisement
Ad
The fourth line is the fourth line. If your fourth line ain’t broke, why fix it and this seems to be a very effective trio at the moment.
Going into the scratches, there is an absolute need to find a fit for Nick Robertson somewhere or send him back to the Marlies to get him playing for a bit. He really doesn’t deserve to be sent down as he has been solid enough, but playing and playing top six minutes wouldn’t hurt in the short term.
Kyle Clifford being healthy means that I’m curious to see him back in the Leafs lineup as he wasn’t bad in his limited playing time so far this season, but like I said the fourth line is trucking and it’s hard to make a case for adding either Clifford or Simmonds into the lineup right now.
Advertisement
Ad
Advertisement
Ad
Looking at the defensive pairings and it feels like we are back to the Rielly-Hainsey days.
Rielly playing with Benn actually makes a lot of sense to me when you figure you want to get the most out of what you have left. Benn is the stay at home anchor that gives Rielly a bit more freedom, and there isn’t anything saying that Liljegren can be bumped up for the offensive zone start shifts.
Giordano-Holl would be a very good third pairing but is a questionable second pairing. I don’t doubt that Giordano can still play at a 4D level, but Holl has been a liability all season. I wonder if this is going to be the second pairing in name only, and the bottom pairing will get a few more chances to prove what they can do.
Advertisement
Ad
Advertisement
Ad
It’s the Swedish House Mafia defensive pairing with Sandin-Liljegren rounding out the blueline. Personally, I’m excited to see them together because if they are going to be Leafs long term this pairing will eventually happen and likely be a second pairing staple for years to come. They might be used as a 3rd pairing against Pittsburgh, but against New Jersey, Buffalo, and the Islanders, if the duo is kept intact they might get a few more tough minutes.